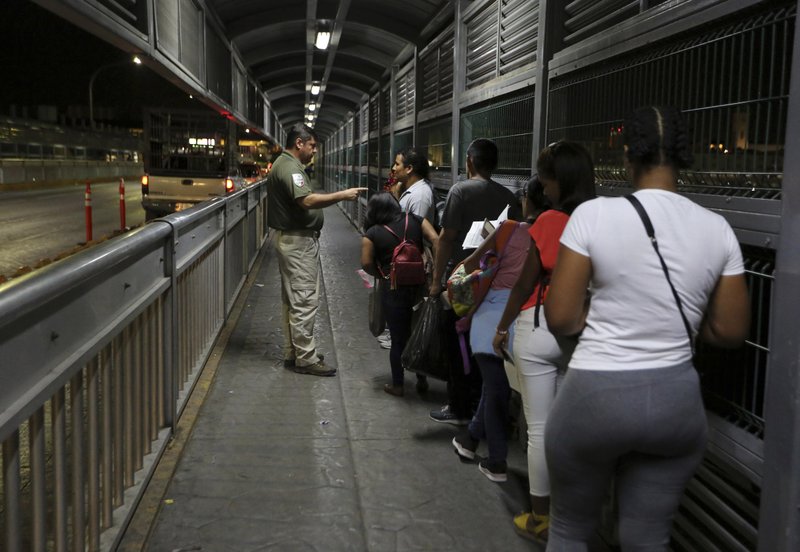 FILE - In this Sept. 17, 2019, file photo, a Mexican immigration officer gives instructions to migrants who are applying for asylum in U.S. as they wait on International Bridge 1 as they prepare to leave Nuevo Laredo, Mexico, and enter Laredo, Texas. Mexicans are increasingly the face of asylum in the United States, replacing Central Americans who dominated last year's caravan and a surge of families that brought border arrests to a 13-year high in May. It is unclear precisely what is driving the change, perhaps a mix of U.S. policies and violence in Mexico. U.S. Customs and Border Protection figures show fewer Mexicans are crossing, but the drop in Central Americans is much sharper, making Mexicans a bigger part of the mix. (AP Photo/Fernando Llano, File)

EL PASO, Texas -- Mexicans are increasingly the face of asylum in the United States, replacing Central Americans who dominated last year's caravans and a surge of families that raised border arrests to a 13-year high in May.

Arrests have plummeted since May as new U.S. policies targeting asylum have taken hold, but Mexicans are exempt from the crackdown by virtue of geography.

A legal principle prevents countries from sending refugees back to countries where they are likely to be persecuted. Therefore, Mexicans are exempt from a policy that took effect in January to make asylum seekers wait in Mexico while their claims wind through U.S. immigration courts.

They are also exempt from a policy, introduced last month, to deny asylum to anyone who travels through another country to reach the U.S. border without applying for asylum in that country first.

Mexico resumed its position in August as the top-sending country of people who cross the border illegally or are stopped at official crossings, surpassing Honduras, followed by Guatemala and El Salvador. Mexicans accounted for nearly all illegal crossings until the past decade as more people from Central America's "Northern Triangle" countries decided to escape violence and poverty.

Fewer Mexicans are crossing from the peaks reached in May, but the drop in Central Americans is much sharper, according to U.S. Customs and Border Protection figures. Mexicans arrested or stopped at the border fell 8% from May to August, but border crossers were down 80% from Guatemala, 63% from Honduras and 62% from El Salvador during the same period.

In addition to the U.S. policies, violence in Mexico is likely to blame for some of the crossings.

"With homicide levels that are exceeding even the record high numbers from 2018, it seems likely that more Mexicans are fleeing their hometowns out of fear and the growing sense that the Mexican government, at all levels, is either unable or unwilling to protect them," said Maureen Meyer, director for Mexico and migrant rights at the Washington Office on Latin America, a human-rights research group.

People traveling as families accounted for 23% of all Mexicans arrested or stopped at the border in August, a major shift from earlier immigration waves when nearly all Mexicans came as single men, according to Customs and Border Protection figures. Another big change: 36% of Mexicans presented themselves at official crossings in El Paso and elsewhere -- the U.S. government's prescribed way to claim asylum -- instead of earlier times when nearly all tried to cross illegally.

Asylum-seeking families have generally been released in the United States with an ankle monitor on the head of the household and a notice to appear in backlogged immigration courts. That changed for everyone except Mexicans with the new U.S. limits on asylum and its policy to make asylum seekers wait in Mexico.

"It's a pretty drastic change from what we have been observing in the past couple of years," said Guadalupe Correa-Cabrera, an associate professor at the Schar School of Policy and Government at George Mason University. "Now the word has been spread out, and the Mexicans are the only ones that can apply for asylum right now."

Information for this article was contributed by Elliot Spagat of The Associated Press.