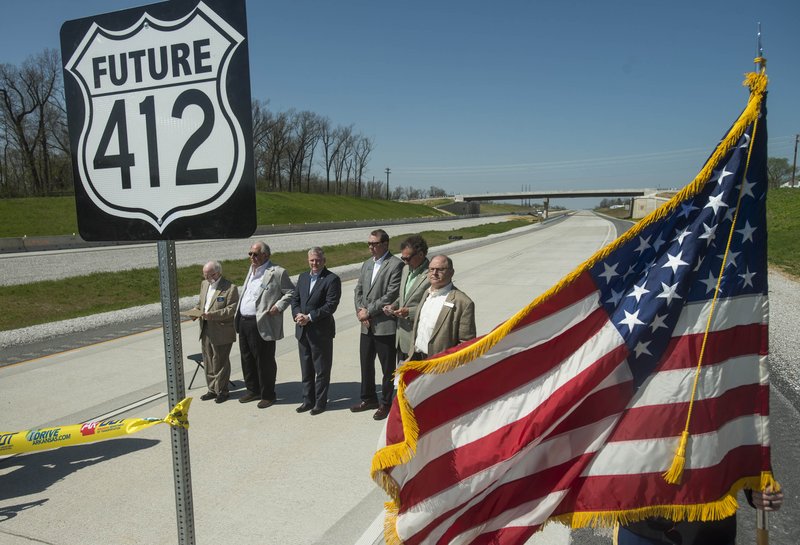 NWA Democrat-Gazette/BEN GOFF @NWABENGOFF Guests gather Wednesday, April 18, 2018, during a ribbon cutting for the first section of the future U.S. Highway 412 Springdale Northern Bypass. The 4.5 mile section of four-lane divided highway through Benton County connects Interstate 49 on the East to Arkansas Highway 112 on the West.

MOUNTAIN HOME -- Members of the North Arkansas East/West Corridor Association hope the results of a study of U.S. 412 will help them get money for improvements.

He said area business leaders want to spur development by widening and improving the highway, which runs across the northern end of the state.

Arkansas' section of U.S. 412, which runs from Siloam Springs to the Missouri state line near Paragould, has 204 miles of highway, of which 140 miles are two lanes. The highway has four or more lanes on its eastern and western ends, with some four-lane sections in Boone, Marion, Fulton, Sharp and Lawrence counties.

"You look at Fulton County, Marion County and parts of Boone County, and those are pockets of underdeveloped areas," Losurdo told the Quorum Court. "Without that road, truckers tell me they are just not going there. Businesses say they're not coming here because they cannot get their raw materials in and their finished products out, at least not on time."

The study is expected to be released in January or February, Losurdo said. It will be the first comprehensive study of the highway since the mid-1980s.

Despite those designations, development of the highway has been slow, Losurdo said.

"On the east and west of Mountain Home, you still have two-lane roads," he said. "Our conversations with companies that want to move down here -- trucking companies, particularly on the west end of the state -- they will take their trucks and move them up to Joplin, Mo., across Missouri and then down (into Arkansas) when necessary just to avoid 412."

A potential source of funding for improvements is a recent state sales tax increase on motor fuel.

Legislation signed into law by Gov. Asa Hutchinson in March went into effect Oct. 1, raising the sales tax on unleaded gasoline by 3 cents to 24.5 cents a gallon and raising the tax on diesel fuel 6 cents to 28.5 cents per gallon.

The move is estimated to raise $95 million for highway funding and increases the state's tax on motor fuels for the first time in 20 years.

An amendment converting a statewide half-cent general sales tax that supports the state's Department of Transportation into a permanent sales tax will appear on the November 2020 election ballot. That sales tax was approved by voters in 2012, but is scheduled to expire in 2023.

The half-cent sales tax has generated more than $1 billion in revenue for highway projects since it was enacted. Cities and counties also receive revenue from the tax.

"We are hoping that, with the fuel sales tax and the half-cent sales tax, that there will be some funding to start improving 412," Losurdo said. "We've been told that would be the case."

"That's not going to happen, at least in my lifetime," he said. "But if we can get some of the two-lane (sections) upgraded with passing lanes and some places widened to four lanes with a middle (turning) lane, then we're making a lot of progress. That's what we're advocating -- improvement."