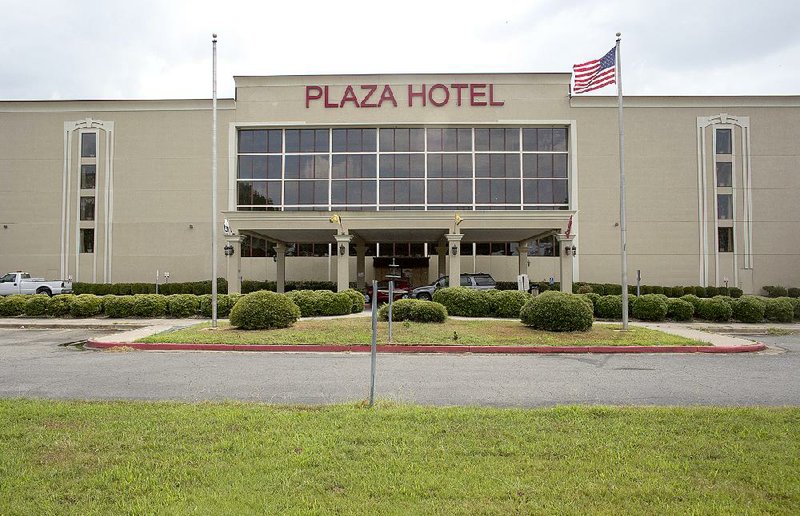 The Plaza Hotel in Pine Bluff is shown in this file photo.

PINE BLUFF -- A deal brokered by Mayor Shirley Washington and the Pine Bluff Urban Renewal Agency would give the city a hotel anchor for the convention center once again, provided the deal can pass muster with the Pine Bluff City Council.

The plan to purchase the Plaza Hotel for $1.2 million and turn it over to the Pine Bluff Convention Center with a planned $8 million to $10 million renovation financed through hotel revenue and taxes collected by the city's Advertising and Promotion Commission has drawn fire from several council members. Those who objected gave reasons of the cost, the funding mechanism, or opposition to the city getting into the hotel business.

A resolution passed by the Pine Bluff Civic Auditorium Complex Commission contends that the current condition of the hotel "harms the recruitment of conventions and entertainment that will have a significant impact on the city." The commission struck an agreement Tuesday with the Urban Renewal Agency to acquire and renovate the Plaza Hotel as a way to give the convention center a hotel anchor again.

A feasibility study commissioned by Go Forward Pine Bluff in conjunction with the Urban Renewal Agency that was conducted by Hotel Valuation Services of Flower Mound, Texas, concluded that the hotel can be profitable after a complete renovation.

The $12,500 cost of the feasibility study was paid for by the Urban Renewal Agency.

On Monday night, the City Council will consider a resolution that would authorize the mayor to write a letter of support urging the Advertising and Promotion Commission to designate the Pine Bluff Hotel and Convention Center Complex as a top priority in fiscal 2020. As written, the council would make a recommendation that the commission designate the debt service associated with a bond issued by the Civic Auditorium Complex Commission for renovation of the Plaza Hotel as a budget priority.

Council Member Bruce Lockett objected to the acquisition of the hotel, saying the City Council has been kept out of the loop, with little information forthcoming until the deal was nearly done.

"What I'm saying is Urban Renewal has voted to acquire the property," Lockett said. "The convention center has agreed to accept the transfer of the property. The only thing that is left is for [the Advertising and Promotion Commission] to assume the debt service on the property, but this is a deal that is 95 percent done."

A check of the minutes of the Pine Bluff Urban Renewal Agency posted on the agency's website showed that initial discussions regarding possible purchase of the Plaza Hotel were conducted May 20. Notice of the May 20 meeting was sent by email to council members, elected officials, department heads and the media on May 14.

Council Member Ivan Whitfield said he has long been on record as supporting the purchase of the hotel, with the caveat that he wants the purchase to be made with a known source of income, which he said is lacking in the current arrangement.

"Now we have an offer on the table but nothing is attached to it to say how it's going to be purchased," Whitfield said. "I think if we're going to do it that way we need to hear from the Advertising and Promotion board what they have on their schedule as the most important thing."

Council Member Steven Mays also objected to the purchase of the hotel, calling the $1.2 million price tag too expensive, and saying the hotel could have been purchased several years ago for far less than that.

But not all the city's aldermen are against the proposal.

Council Member Glen Brown Jr. said it is imperative for the city to control the hotel to be able to ensure that its condition is improved and maintained sufficiently to attract a major hotel brand to operate it.

"The city needs to have that hotel," he said. "It's directly attached to our convention center and it's one of the main reasons why our convention center traffic and booking of events has gone down in recent years. The city having direct oversight in how the hotel is run and maintained will be a great asset."

Council Member Joni Alexander said the idea to purchase the hotel is a good one and one the city needs to take advantage of.

"I think if we don't we're just going to fall back into the same situation we're trying to get out of now with that hotel," Alexander said. "Especially while we have the funding to purchase it. I think when it was first offered in 2015 the city didn't have the money and would have had to pull from reserves but now we actually have the funding to purchase this hotel and upgrade it so that a [franchise] flag can proudly fly and we can use it."

Council Member Win Trafford said he plans to give the resolution his approval when it comes up for consideration.

"We need that hotel," he said. "It's vital to our convention center to get new conferences, to get back some conferences we used to have when we had a reputable hotel, and I believe with everything that's going on downtown, that hotel being right there with the convention center, it just makes it that much more viable."

Council Member Donald Hatchett said he supports the city buying the hotel but said he does not think it would be a good idea for the city to run it.

"I would hope that the convention center would turn it over to a franchise operation and not try managing the hotel themselves," Hatchett said.