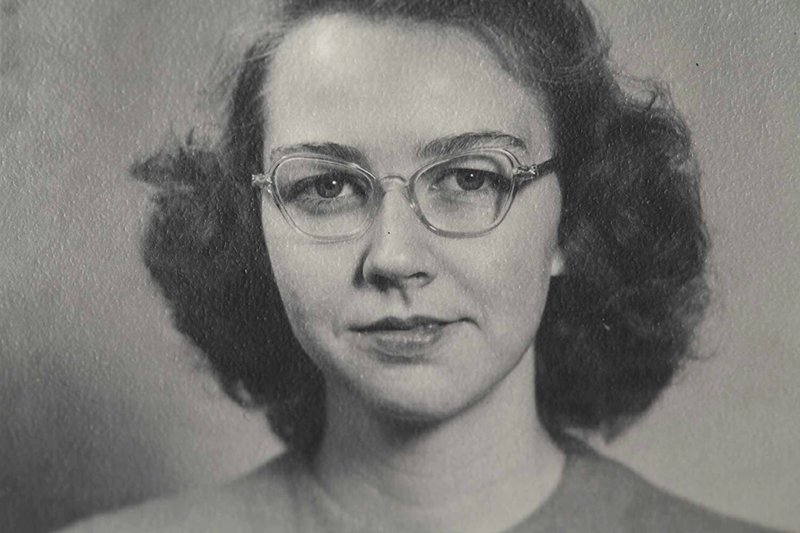 During her brief life, (Mary) Flannery O'Connor wrote a series of dark short stories and novels that came to embody the idea of Southern Gothic. Her stories featured misfits like Hazel Moses in Wise Blood, a struggling preacher who proclaims he's with the Church of God Without Christ. Oh, and he's the only member of the congregation as well. Her other tales involve a schemer who steals a woman's prosthetic leg and other misdeeds.

Her stories can be as compelling as they are disturbing, but the complex mind behind them isn't easy to classify. For one thing, while her tales recount acts of depravity, her journals reveal that she was a devout Catholic in the 1940s and '50s Georgia, when the Vatican was considered a potential invader. Furthermore, because she died in 1964 at the age of 39, there is only one on-camera interview and few recordings of her thoughts about her literature and its meaning.

That lack of archival material didn't stop directors Elizabeth Coffman and Mark Bosco from examining her life and career in the new documentary Flannery, which opens the Hot Springs Documentary Film Festival today at 7 p.m. at the Arlington Cinema 1. (Tickets are $15, and Coffman and Bosco are scheduled to attend. For more information see the festival's website at hsdfi.org.)

"As (Oscar-winning actor) Tommy Lee Jones says in the film, she's one of the best writers of the 20th century," Coffman says. "One of our goals in the film is to have her name right up there with Faulkner and Hemingway. She was distinctively modern, compelling and inspirational for lots of types of artists."

Flannery features an impressive list of talking head admirers including Mary Karr, The Color Purple author Alice Walker (who grew up near where O'Connor lived), Conan O'Brien, Tobias Wolff (This Boy's Life, Old School), Hilton Als of The New Yorker and Alice McDermott. Coffman credits Bosco for getting many of these people to talk on camera about what O'Connor's writing means to them and why it's significant. Like Coffman, he used to teach literature at Loyola in Chicago.

He also happens to be a Jesuit working on his first film. When contacted for this story, he'd just performed a mass. While both met as colleagues at Loyola, he now teaches at Georgetown.

"I'm a professor of English and theology, and I write and do research on the great Catholic revival that took place throughout the 19th and 20th centuries," he says."Of course, Flannery O'Connor was central to that. I kept talking to artists who kept saying, 'Oh, Flannery O'Connor was one of the most important artists. She inspired me."

The film includes interviews from Sally Fitzgerald, the executor of O'Connor's estate and her publisher Bob Giroux that producer Chris O'Hare collected. Bosco has held conferences on O'Connor's work, and the film includes recollections from people who knew her personally.

As for O'Connor herself, there isn't much cinematic material. While she wrote two novels (Wise Blood, The Violent Bear It Away) and more than 30 short stories, there's only that single television interview with her from the 1950s and few audio recordings or photographs.

Flannery includes excerpts from John Huston's faithful 1979 adaptation of Wise Blood, but Coffman recalls having to get creative to make O'Connor's writing work on screen.

"I'm not a fan of films about writers that don't include some of their fiction, their nonfiction and some of the writing that made them famous. From the very beginning, I wanted to include excerpts of O'Connor's fiction, and her trust said no dramatic re-enactments of her or her fiction [were allowed]. But I got the trust to agree to motion graphics and allowing us to hire actors to do voice work," she says.

The animation helps bring the stories to life, Coffman and Bosco recruited Arkansas' Mary Steenburgen to read from O'Connor's prose. As anyone who has ever lived in either state knows, the accents can vary widely. Steenburgen had to adapt her own delivery to match O'Connor's idiosyncratic drawl. Originally hailing from Jacksonville, Fla., Coffman comes from a family with roots in Tennessee and Virginia. To a trained ear, inauthentic accents can be a distraction.

"O'Connor had this distinctive accent that is Savannah with a little Appalachian-Canadian belt in it. It's a distinctive kind of accent that's not true through all of Georgia even. I struggled with that," Coffman says.

Coffman helped ensure that O'Connor's Georgia roots were firmly established, Bosco says that Catholicism was just as important to O'Connor as it was to G.K. Chesterton or Graham Greene. Her journals and letters reveal that her faith drove her work.

"What I find fascinating about her first journal before she goes off to do her MFA in Iowa is that already you kind of have all the elements the questions of her life: How do I be a good artist? How do I be a good artist for the right reasons, not for my own pride but to be a vehicle for doing something really great? It's a really kind of humble religious stance. She was thinking of things at 18 or 19 that I as a Jesuit priest wasn't thinking about when I was 19 or 20," Bosco says.

"She never proselytizes or tries to evangelize. She's just a good artist who's so steeped in and committed to her religious faith as a Catholic that it kind of shapes and frames the way she thinks of what a story is. What are the sort of cosmic outcomes of a story with salvation, death, judgment, that kind of a thing. I think that's the beauty of Flannery O'Connor. One does not have to be a religious person to appreciate the artistry and the true giftedness of her work. At the same time, without knowing anything about religion, you're probably missing the icing on the cake as well."

Her faith may also explain why she was drawn to stories about outsiders. As the film documents, the Ku Klux Klan campaigned against Catholics just as they did against blacks and Jews.

"Because [her family] had land, it put them in a class system where they had some approval but because they were Catholics they never had full approval," Bosco says. "They kind of banded together in certain towns in Georgia. They kind of married into other clans of Catholics in the South. She's in the white world in the South, but she's got this minority Catholic world where she gets along with folks. But there's a very different way that she looks at the world and ultimately looks at the way to salvation."

Another factor could have been the fact that she knew the same lupus that killed her father was going end her life prematurely as well.

"She lived with a death sentence over her head," he says "'There's no fooling around now. I work because my gift is my reason for being alive. It's my way of completing myself.' I very much feel that if she had not been sick, her greatness might [eventually] have shown up, but it's so distilled and crystallized. It's powerfully compact in her stories and her novels. It's even in her letters."

Flannery took nearly eight years to complete. Because Bosco moved to Georgetown during production, the filmmakers assembled the final edits through Dropbox. Coffman has an editing credit and a doctorate in film. Because she knows the challenges in getting any movie assembled, much less one about a dead writer with scant archival footage, she sometimes dreads it when people casually suggest she make a documentary.

"You're always hesitant when you're a filmmaker because people who don't understand film don't think it's that big of a deal," she says. "Just get a camera and maybe a microphone. What's the difficulty?"