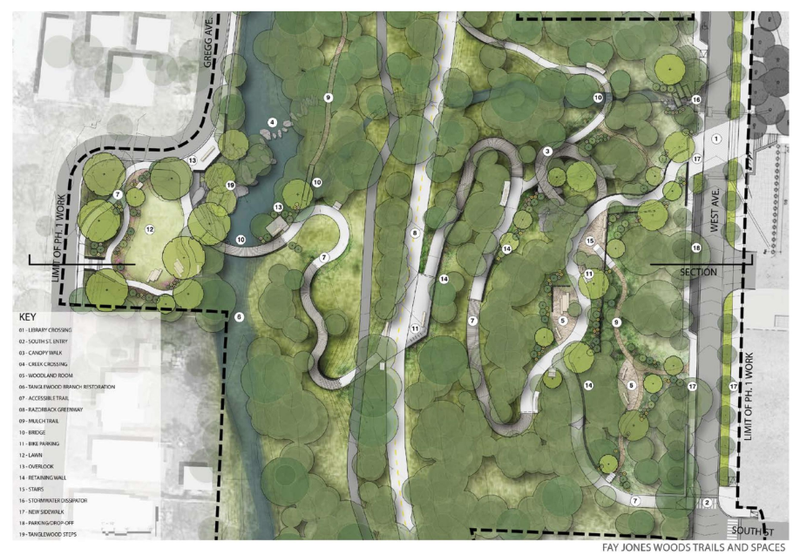 Courtesy photo/CITY OF FAYETTEVILLE A conceptual drawing shows the plan for trails, gathering spaces and other amenities at the Fay Jones woods west of the Fayetteville Public Library. The city's Active Transportation Advisory Committee viewed the plans Wednesday.

FAYETTEVILLE -- Planners behind the arts corridor want pedestrians and bicyclists to have better access to what they see as a hidden gem of woods and natural life downtown, members of the city's trails committee heard Wednesday.

Renderings shown to the resident-led committee depict a network of trails stemming from the Razorback Greenway running through the Fay Jones woods west of the Fayetteville Public Library. Amenities such as canopy walks, gathering spaces and bicycle parking also were shown.

Peter Nierengarten, sustainability director for the city, said the goal is to revitalize the nearly 15-year-old stretch of the greenway running through the woods. The asphalt trail has started cracking and will be replaced with concrete. Invasive plant species also will be removed with stream restoration work at Tanglewood Branch running west of the trail, he said.

"We're really trying to do a sensitive job of providing those trail connections through the woods, but in such a way that preserves as much of the natural ecology there as possible," he said.

City officials hope to get going on construction for the woods, trails and improvement to West Avenue by the spring, Nierengarten said. A public meeting is planned Nov. 14 after more concise drawings are completed, he said.

Turning the parking lot in front of the Walton Arts Center into a civic plaza and building a parking deck downtown are separate parts of the nearly $31.7 million cultural arts corridor bond project voters approved in April. Construction on the parking deck, in a location to be determined, should start in spring 2021. Civic plaza construction will start after the parking deck is finished, likely sometime in 2022.

Design consultant Nelson Byrd Woltz has been behind the arts corridor project since June 2018. Concepts for the Fay Jones woods show an elevated crosswalk across West Avenue from the library into the trail network in the woods. A crosswalk will also reach into the woods from the intersection at South Street.

The slopes of the trails will be accessible to all ages and abilities, Nierengarten said, with elevated pathways where needed. Planners identified at least 1,200 trees to preserve and work around, he said.

The raised canopy walk will go in a loop east of the greenway, with gathering spots tucked into the woods. An intersection of trails in the middle of the woods will have bicycle parking spaces. Farther west, the trails will reach to Tanglewood Branch.

The city has been working with the Watershed Conservation Resource Center to restore the stream, Nierengarten said. A creek crossing of stones, an overlook and a lawn near Gregg Avenue will help make the area inviting, fun, playful and educational to visitors, he said.

Committee Chairman Paxton Roberts said designers should stay mindful of the interaction between pedestrians and bicyclists on the trails through the area.

"Going down the hill, 10 feet wide -- you know it's going to be a very pedestrian-heavy area because of all the viewing areas," he said. "So it's a little bit of a concern with the congestion there."

Nierengarten said the greenway will not be widened, but repaved. New trails will make it possible to move through the woods between West and Gregg avenues, he said.

Committee Member Laura Canter said she liked the connections from the Razorback Greenway to the library. Right now the trail reaches the library entrance on a steep incline at Mountain Street.

"I think this looks great," she said. "It's an area that's underutilized. I'm really excited to see this happen."