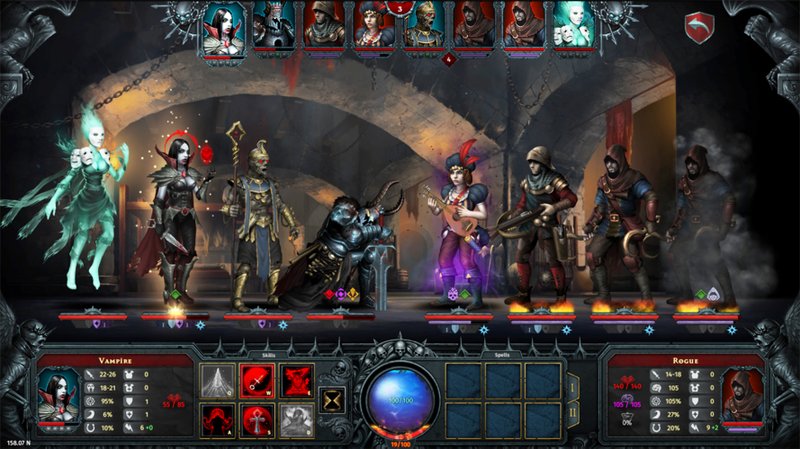 Iratus, the Lord of the Dead, has once again been unleashed upon the world! Once he was defeated and entombed deep underground in what was hoped to be an eternal imprisonment, but miners digging for riches broke the spells holding him. He threatens the world once more.

If you play this game, though, you do not need to defeat Iratus — you are Iratus, and your first order of business is to get to work with some body parts, creating minions to do your dirty work. And the first step toward world domination is escaping from underground tunnels populated by all kinds of threats to your rule.

What does a necromancer need to take over the world? Body parts, lots of body parts.

When Iratus' minions defeat enemies, they bring back with them their grisly loot — eyeballs and flesh and bones and such — which Iratus can then use in his unholy crusade.

The Russia-based developers of Iratus: Lord of the Dead have cited two major influences to their work, 1997's Dungeon Keeper and 2016's Darkest Dungeon. The former was a groundbreaking game in which players created deadly dungeons designed to kill heroes who came to clear them. The latter's influence is plain to see, from Iratus' side-view, 2D perspective on how the tactical combat works. In Darkest Dungeon, ragtag groups of amoral adventurers (from leper paladins to mystical wizards) battled hordes of disgusting monsters. Here, it is the opposite.

Your battle-ready array in Iratus is in fact almost identical to Darkest Dungeon. Both Iratus and his enemies use a team of four, arranged single-file, left to right. Each minion takes turns acting, according to its initiative score, and its goal is to kill (or re-kill) the opposing side.

Each minion has a variety of abilities at its disposal, and where the minion is positioned determines if that ability can be used. For example, some abilities can only be used from the first two rows closest to the enemy, while others can only be activated from the farthest left position. And some of these skills target enemies in particular positions.

There are also abilities that can move minions and enemies left or right, which leads to tactical play, such as getting a wounded minion off the frontline and toward the protected back ranks. One of the interesting mechanics in Darkest Dungeon was that your adventurers could receive two types of damage:

In Iratus, your minions also deal those two types of damage, with some minions being specialized toward one or the other. Terrifying your opponents until they lose their minds and run away, or causing them to have a heart attack, are viable combat strategies. (Just don't try it against certain enemies, such as golems, which are immune to non-physical damage).

Don't think that just because your soldiers are undead that it's OK if they die, though. Resources are scarce in Iratus, and if you want to win, you've gotta have heart. And brains. No, really, brains are important loot that drops from battles and feeding brains to your minions increases their experience level, making them more powerful and granting them access to improved abilities.

Between battles, Iratus can upgrade his graveyard, letting injured minions heal or dig for artifacts. Both minions and Iratus can level up, and both can gain equipment to use. As Iratus levels up, he gains points that he can put toward spells to assist in combat (like setting enemies on fire, or healing your minions), and toward various other abilities, like having more resources drop as loot. Iratus can also combine body parts to create enhanced parts and then swap minions' body parts, upgrading them.

As Iratus levels up, he also learns to create a wide variety of minions, such as skeletons, zombies, banshees, vampires and more. And with each victory, he pushes closer to the surface, and enemies grow progressively more difficult.

Iratus: Lord of the Dead is also a "roguelike," a role-playing game in which failure brings permanent death and levels are generated as you survive your way through them. Some things are always the same (starting minions, how spells work and so on) but others are randomized with each play-through, from enemies encountered to random events and what loot drops. And minions, once dead (again), are gone for good.

Without the right combination of minions, Iratus is rather difficult, even on the easiest settings. Unlike in Darkest Dungeon where there were always fresh-faced adventurers arriving to replace fallen veterans, and where low-level dungeons could be replayed infinitely, Iratus requires constant momentum for success. A single party wipe against a tough opponent can tank a whole game with no way to recover.

Iratus is still in early access mode and won't officially launch until about mid-2020, but developers are actively improving it. A content patch released a couple of days ago added two new minions, three new enemies and a variety of updates to skills and bug fixes. It's not quite on the same level as Darkest Dungeon in either combat mechanics or lore, but it's shambling in the right direction.

Title: Iratus: Lord of the Dead

Rating: Mature for reanimating the dead and attempting world domination