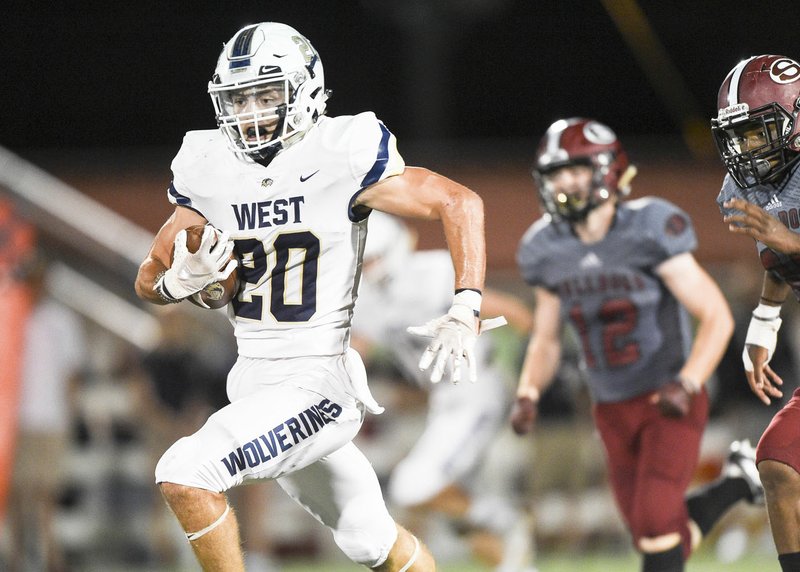 SPRINGDALE -- Stephen Dyson walked off the football field and shot a glance at his coach before taking a spot on the sideline.

Bentonville West coach Bryan Pratt made eye contact with his junior receiver who had just fumbled a punt and told Dyson, "you owe me one."

Dyson squared it up before the first quarter ended, returning a Springdale High punt 68 yards for a touchdown as the Wolverines rolled to a 54-20 win in Jarrell Williams Bulldog Stadium.

"I just lost concentration on that first one and let the ball slip through my hands," Dyson said. "It was my mistake. You have to have short-term memory and move on to the next play and don't let it affect how you play.

"On the return, I got some good blocking on the outside and made a guy miss and just finished it off."

The Wolverines (3-2, 2-0 7A-West) dominated in every fashion, building a 47-13 lead at halftime and invoking the sportsmanship 35-point rule on their opening possession of the second half. West scored touchdowns on a blocked punt return, Dyson's conventional punt return and two long touchdown passes in the first half.

The two special teams scores were highlight plays, but the biggest highlight play came after Springdale capped a 70-yard drive with a touchdown to pull within 23-6 with 9 minutes, 38 seconds left in the second quarter.

West senior Nick Whitlatch took a handoff and ran through a gaping hole in the Springdale defense. Whitlatch, who is an all-state track athlete, dashed through the Bulldogs' secondary and ran away from every defender on an 80-yard run.

"A lot of our guys are multi-sport guys, and that's what makes us special over there is we have multiple guys who play multiple sports," Pratt said. "That's a cool thing that you don't see a lot in 7A anymore. He's a really good track runner and had had a lot of success, and the track coaches have done a really good job of developing his speed."

West quarterback Dalton McDonald played the first half and just one series in the second half. That's all the junior needed to put up big numbers. McDonald finished the night 7 of 9 passing for 213 yards and 3 touchdowns.

McDonald executed a perfect play-action pass in the first quarter on a 27-yard strike to Brandon Humes. The play-action drew the Springdale secondary in, and Humes was all alone behind the defenders and hauled in McDonald's pass to give the Wolverines a 16-0 lead.

Springdale (3-2, 1-1) had its three-game win streak snapped, but had a pair of productive drives in the second quarter after being held without a first down in the opening quarter. Darrell Parchman capped both drives with short scoring runs, the second set up by a pair of 15-yard strikes from Conner Hutchins to Ladarius Wonsley. Wonsley, the leading receiver in the 7A-West, finished the night with 7 catches for 91 yards.

"We really tried to come into this game and be balanced," Pratt said. "We wanted to run the football, but also try to get some balls over the top. Our kids bought into what we're doing. It's a long season. I think that week two at Bryant made us a better football team. We understand now how we have to practice and what's at stake. Right now we're playing well."

• West kicker Trey Travis also got into the scoring by kicking a pair of field goals, including a 47 yarder.

• West was about as balanced offensively as it could be in the first half. The Wolverines rushed for 177 yards, and McDonald was 6-of-8 for 177 yards through the air to six different receivers.

• Aileen Ortiz, a senior, was crowned Springdale homecoming queen prior to the game.