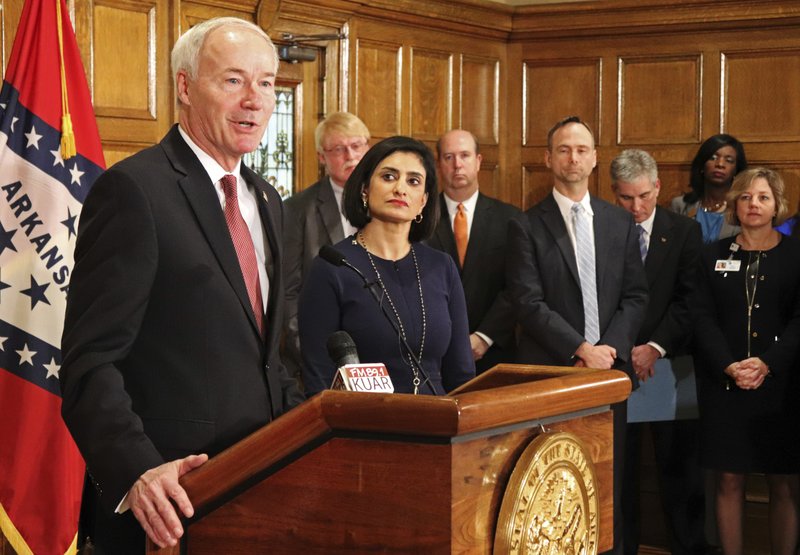 In this 2018 file photo Gov. Asa Hutchinson speaks at a news conference at the state Capitol in Little Rock, Ark., with Seema Verma, the head of the Centers for Medicare and Medicaid Services.

The Department of Human Services asked circuit judges to appoint a receiver for Lexington Place Healthcare and Rehabilitation in Jonesboro, Lincoln Heights Healthcare in Star City and Prescott Manor Nursing Center in Prescott.

According to court filings, the sites appeared "to be financially unable to secure or maintain continuing and regular sources of food, medicines, services, and supplies necessary for the safe and continued operation of the facility."

It was "uncertain and questionable" whether the facilities would be able to maintain minimum staffing levels as a result of problems meeting payroll, attorneys for the department wrote in their complaints.

By Thursday afternoon, circuit judges in Craighead, Lincoln and Nevada counties signed off on the requests, appointing the state as a temporary receiver for the facilities over a 30-day period.

On Monday, the department had asked to have Arlington Cove Healthcare in Trumann and Deerview in Ola put in receivership while officials monitored the three remaining facilities.

The five nursing homes were licensed to companies owned by Keith Head and Cathy Parsons of Conway, according to previous reports.

A person who answered the phone Thursday evening at a number listed for Head said he was not available and hung up, and an attorney for Parsons previously told the Arkansas Democrat-Gazette that she has not been involved with the group since March 2018.

Facebook posts about payroll problems at the Jonesboro facility tipped off the Human Services Department about potential problems at the group of homes in late September, and agency surveyors had been on-site at all five facilities since Sept. 25.

Under the receivership status, the department will ensure that the homes remain open, residents are cared for and the staffs are paid, according to a news release.

"We are taking these steps to ensure the health and safety of the residents living at these facilities," Jerry Sharum, director of the Provider Services and Quality Assurance Division, said in a statement.

"We will stay at these facilities until we can be assured residents are getting the services they need, and the staff is getting the necessary supplies needed to care for the residents."

No residents have been moved or are expected to be moved from the homes, and day-to-day operations will be temporarily managed by Reliance Health Care, Human Services Department spokeswoman Amy Webb wrote in an email.

The company also will help manage the Trumann and Ola homes placed in receivership earlier.

Of the five homes, overall ratings on a nursing home comparison database maintained by the federal government range from "average" for the Prescott and Trumann homes to "much below average" for Star City and Ola.

That data is compiled from Centers for Medicare and Medicaid Services inspections and other sources.

Asked whether fines, penalties or other sanctions would be levied against the homes' operators, Webb said that "right now our priority is the health and safety of residents, though we have notified state and federal officials of these actions."