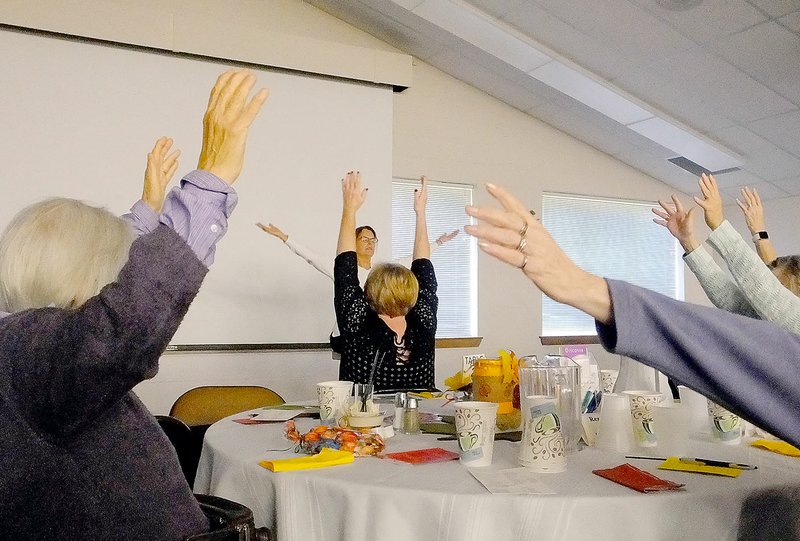 A group that numbers as many as 75 women has been meeting quietly at a Bella Vista church each month to enjoy a catered breakfast and listen to an inspirational speaker. But that meeting is only the tip of the iceberg. The Christian Women's Connection is actually much more.

Most recently week, the inspirational speaker had some tips for women who hide their own insecurities and attempt to control too much, while the featured speaker shared how yoga can make you a better Christian. That was at the monthly gathering of the entire group at Community Church in Bella Vista. Smaller gatherings take place each month as well.

Cost: $10 for an “all-American breakfast”

FYI: The Bella Vista Women’s Chorus will be featured, along with speaker Kristi Wolf Norris of the Kiowa Tribe.

Christian Women's Connection is part of Stonecroft Ministries, which began as Christian Business Women's Council of America in the 1930s. In 1949, it was opened to homemakers as well. The national headquarters is in Kansas City, Kan. According to its website, stonecroft.org, there are about 600 smaller clubs.

Locally, there are Bible studies where small groups learn together, a prayer meeting, and a day dedicated to crafting decorations for the big meeting. Not only are members learning, but they are also making friends and sharing burdens.

It's an ecumenical program, so members of any church are welcome to attend.

Dorothy Nigro, a member of the planning committee, introduced her friend Kris Driskill to the group as a "former director of the universe."

Driskill's story touched some familiar chords in the audience.

She married young, and her primary goal in life was to be a perfect homemaker, but that never really worked out, she said. No one knew about her insecurities, which she illustrated by telling the story of a childhood visit to an amusement park. She had been adopted, and her parents were a little older than the average parent. When they were too tired to go on rides with her, they encouraged her to continue riding by herself, but Driskill didn't enjoy those rides. What her parents didn't know was that she spent the entire time watching them, making sure they weren't planning to go away and abandon her.

It might have been those childhood insecurities that made her into a perfectionist when she married, or it may have been her natural hyperactive personality. But she has a clear memory of a crisis that changed her life.

Her parents had "retired" to the Ozarks, where they were running a business. Driskill, with her husband and four children, was visiting when her father had a heart attack. The doctor was called and sent them on to Kansas City, where her father could be treated at a VA hospital. There was no one to drive him there except Driskill.

Arriving at the hospital, she was separated from her father and sent to wait in a small waiting room. She had a terrible toothache, and she found that the waiting room was completely empty. There was no one to talk to and no magazines. Even the television was broken. She was looking out the window trying to distract herself from worrying about her father when she remembered a speaker she had heard recently telling people to turn their problems over to God. She hadn't really paid much attention to the speaker, but alone in the waiting room, she decided to try it. She asked God to cure her toothache, and it worked. Her toothache simply went away.

"That Jesus thing is the only relationship in my life that helped me with my insecurities," she said. "God has things under control."

Not all prayers will be answered as definitively as her prayer for toothache relief, she said, but that's because people don't always realize why they must experience and learn from some bad experiences. If they place their faith in God, they will realize that he is the true "director of the universe."

The other speaker at the meeting also had advice. Nancy Keesling teaches yoga at Riordan Hall and wanted to share how yoga can calm the mind and help women accept God's help. She led the audience through several yoga-style stretches.

Next month the women will listen to Christmas music by the Bella Vista Women's Chorus and hear from a member of the Kiowa tribe.

Print Headline: Give it to God