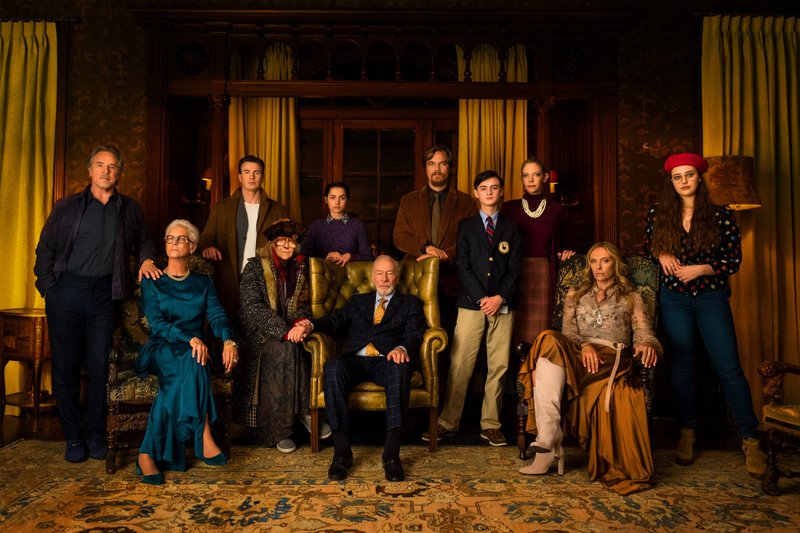 A housekeeper carefully prepares a morning breakfast for her employer, an elderly, world-famous mystery novelist. On the breakfast tray, she adds a large mug ("My house, my rules, my coffee") of steaming brew and makes her way up the twisted staircases and through the hidden passages to the writer's attic study, where she assumes the novelist is residing. Instead, she finds his body draped over a small couch, his throat slit, and the blood trailing from his neck down to the carpet. Aghast and shocked, the housekeeper begins to drop the tray but recovers it just in time to keep the mug safe from its near-obligatory crash-shattering on the wood floor.

That's right: In Rian Johnson's fun and nefariously clever murder mystery Knives Out, things rarely go according to tradition. Even as he subtly sets you up for an expectation, he's just as quick to subvert it, only to revisit it later on (he brings the mug very prominently back in the film's last shot, rewarding a perfect inversion of narrative expectation), which makes for an especially pleasing brew.

The dead body belongs to Harlan Thrombey (Christopher Plummer), the extremely successful and wealthy New England patriarch of a brood of dysfunctional family members, all scrambling in the aftermath of his death to figure out what happened and how it may affect their material lives going forward.

It's a tangled family assembly, but in quick order, you have eldest daughter, Linda (Jamie Lee Curtis), a businesswoman married to an onerously entitled husband, Richard (Don Johnson), with an even more smug and smarmy son, Ransom (Chris Evans); Walt (Michael Shannon), who runs the publishing empire his father built, and his wife, Donna (Riki Lindhome), whose young Republican son, Jacob (Jaeden Martell), everyone seems to loathe; and Joni (Toni Colette), the liberally shallow widowed daughter-in-law to the Thrombeys, and the mother of college-age Meg (Katherine Langford), whose tuition at Sarah Lawrence College Harlan had been dutifully paying.

Further crowding the house with potential suspects, there is also the housekeeper, kindly Fran (Edi Patterson), and our eventual heroine, sweet-minded Marta (Ana de Armas), Harlan's personal nurse, who remained the one person closest to him and quickly becomes embroiled in the tumult, especially after Harlan's will is revealed.

Johnson's film is at once a loving homage to the genre cultivated by writers like Dorothy L. Sayers, Walter Mosely and Agatha Christie, and a rip-roaring deconstruction of the form -- close to halfway through the narrative, the film lets us see exactly what happened to Thrombey, revealing, it would seem, the mystery's solution -- only to then painstakingly take those shattered pieces and astoundingly reform them in time for the film's big closing revelation.

The post-festival press screening was pre-empted by a clip of Johnson himself, bearded and rascally, requesting that we critics don't reveal anything of the plot twists, but in truth, those twists are more like full corkscrews, coming so fast and furious, it's hard to keep up. He's made a film fortified against spoilers by making a plot so dense with them, they would be difficult to reveal out of context even if we desired to do so.

More than the plot itself, an ingenious and kinetic thing that's as satisfying as a hot bowl of soup on a raw and windy day, there's the sense of joyous chaos from the cast. Those scenes where the family is all together, in the drawing room and continually at each other's throats are so delicious, they should come with a napkin. The interplay between vets like Shannon, Johnson, Curtis and Collette is filled with fractious energy, the characters revisiting age-old disagreements ("Your kid's a brat!" -- "Your kid is a Nazi!") with sadistic glee. Even when they band together, in moments, against what they believe to be a common enemy, it's clear the harmony between them is more Iggy and the Stooges than Beach Boys. In short, Johnson has devised a perfect ensemble of dreadful characters and set them all against one another in a narrative fishbowl filled with lye.

Evans, in particular, released from eternal good-guy shackles, at last, with the retirement of Captain America, seems to delight in playing the smug lout of the family, playing his own game even as he befriends and tries to support Marta. Given some of the best lines of the film (his giddy exaltation, "We gotta do this more often!" with his family all at each other's throats is one of the signature moments of the trailer), and with particularly murky motivations, he continually subverts his genial screen presence and seems to cackle with delight in doing so.

Speaking of being freed, Craig, seemingly a permanent resident of the 007 imprisonment camp, attacks the role of the suave Benoit with verve and a winningly sardonic streak. Though Mr. Blanc presents himself as but a "passive observer of the truth," we come to understand his off-beat style is, like Colombo, designed to disarm his suspects into confessing more than they intended.

But the truth is, you could highlight any of the veteran ensemble and endow them with similar praise. Everyone is so good, and relish the characters they're playing so deeply, you can't help but be enraptured by them. A two-hour film of nothing but the family members sitting in the drawing room and bickering would have been worth the price of admission (please, God, let there be a director's cut!), but on top of that, you have Johnson's fiendishly clever plot to savor as well.

The writer/director has always been a gifted visual storyteller -- recently rewatching Brick, his brilliant debut feature from 2005, shot on a shoestring budget, I was again struck at how precise and poetic his visual acuity was, even then, the way he used pace and editing to control the atmosphere. Here, like any good mystery novelist confident on their run, he knows precisely what to reveal and what to hold back, so that the story never stops spinning until the very end.

The final contraption may at times feel as if you've been strapped into an amusement park ride loosed from its moorings, careening in ways you never expected, if thrillingly doing so. It is only at the end that you realize all of the chaotic seeming danger was actually intended and controlled. The film is a magician's trick so thoroughly satisfying, you have no choice but to give in to its mischievous entreaties. You won't have a better time in the cineplex this year.