LSU's Coach Orgeron apologizes to Hogs; 'by no means was that to demean them,' he says of post-game comment 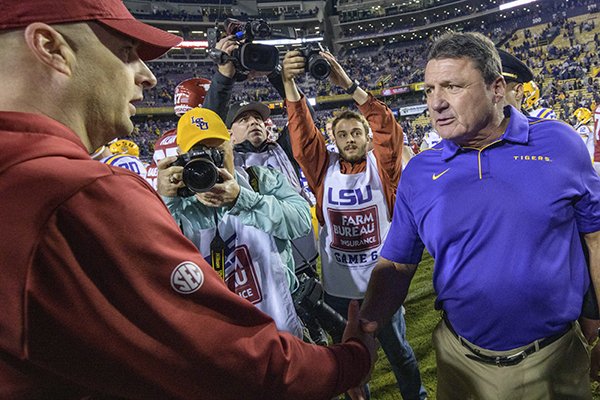 After then No. 1-ranked LSU beat Arkansas 56-20 Saturday night in Baton Rouge, Tigers Coach Ed Orgeron was asked by a reporter why his team wasn't in more of a celebratory mood?

"There wasn't going to be a celebration for beating Arkansas," Orgeron said. "They haven't beaten anyone in a long time."

But in today's social media and politically correct environment, Orgeron's comment went viral to such an extent that he felt compelled to include an apology to Arkansas in the opening remarks of his Monday news conference before talking about Saturday night's game against Texas A&M.

"There was a comment I made after the game, and I want to apologize if it came out wrong to Arkansas," Orgeron said. "I love them."

Orgeron's wife, Kelly, is from Arkansas, and he has many family members and friends who live in the state. He worked at Arkansas as a graduate assistant strength coach in 1986-87.

"I had a great time up there," Orgeron said. "I have some good friends up there. By no means was that to demean them."

If No. 2 LSU beats the Aggies, the Tigers are likely to stay in the top four before playing Georgia in the SEC Championship Game with the hopes of winning the conference title and playing for a national championship.

"That was just the mood of our football team," Orgeron said of the Tigers not making a big deal of beating the Razorbacks. "We have bigger goals down the road.

"If I said something wrong, I apologize to [the Razorbacks]. I know those guys are some good guys up there. Really appreciate those guys."

There's no doubt Orgeron's apology was sincere, but the fact he felt the need to issue it is just another sign of how far Arkansas' program has fallen in being 1-22 in SEC games since 2017.

After Kentucky beat Tennessee-Martin 50-7 on Saturday to become bowl eligible for the fourth consecutive season, Wildcats Coach Mark Stoops shot down speculation he might leave for Florida State.

Stoops has been mentioned as a strong candidate to be the Seminoles' coach because he was FSU's defensive coordinator before taking the Kentucky job in 2013.

Stoops said he felt the need to make a definitive statement about his commitment to Kentucky.

"I was answering too many questions with recruits," he said. "Just felt like it was time to answer those questions directly and be honest with them and this is where I want to be, so this is what I want to do."

Despite what Stoops said after the game, he was asked about his commitment to Kentucky again at his Monday press conference for Saturday's rivalry game against Louisville.

"I think I was pretty clear," Stoops said. "I'm really intent on being here and building this program.

"We have unfinished business and I'm excited about the future."

After Georgia running back D'Andre Swift was tackled for a 2-yard loss on a draw play in the final minutes of the Bulldogs' 19-13 victory over Texas A&M last week, he quickly expressed his displeasure to quarterback Jack Fromm.

Swift was upset that Fromm hadn't made an audible, so the play wouldn't be run into the strength of the Aggies' defense.

After the game Georgia Coach Kirby Smart was asked about the "dustup" between two of his star players.

"I wouldn't call it a dustup," Smart said. "[Swift] was just frustrated. It was a situation where we don't run that play into a pressure from that side. They did a good job disguising it.

Swift told reporters he wanted Fromm to snap the ball quicker, but that he then realized it wasn't the quarterback's fault for running down the play clock with Bulldogs working to protect a lead.

"If you played football, you know teammates argue sometimes," Swift said. "We've got nothing but respect and love for each other."

Fromm listened to Swift after the play without getting back in his face.

"I think it's just two competitors that want to compete and do the right thing for the offense," Fromm told reporters. "The clock is ticking, they showed a blitz there at the last second and I didn't have enough time to change it."

Smart said he appreciated how both Swift and Fromm handled the situation.

"It's love," Smart said. "When you have family, your family doesn't always get along, right? But they love each other. These two young men love each other as much as anybody."

It's no surprise Alabama Coach Nick Saban heaped praise on Auburn at his Monday news conference with the Crimson Tide playing the Tigers at Jordan-Hare Stadium on Saturday,

Auburn is really good -- its three losses are to No. 2 LSU, No. 4 Georgia and No. 11 Florida and it has victories over No. 14 Oregon at a neutral site and at Texas A&M -- but Saban raised some eyebrows with something he said about the Tigers.

"This is the best team we've played probably so far this year," Saban said of Auburn.

That comment surely was heard loud and clear in Baton Rouge considering LSU won 46-41 at Alabama earlier this season.

After Jarrett Guarantano passed for 415 yards to help Tennessee win 24-20 at Missouri, the Vols' junior quarterback revealed to reporters that he received some death threats earlier in the season when the team was struggling before becoming bowl eligible.

Guarantano, who regained the starting job he lost earlier this season after playing well of the bench, thanked his teammates for having his back during a trying time. He said his sister, who is a Tennessee student, also received some messages.

Tennessee Coach Jeremy Pruitt said he wasn't aware of the death threats made to Guarantano until hearing about his postgame comments.

"Obviously, that's something that anybody should take very seriously," Pruitt told reporters. "So we're doing whatever we need to do as a university to look into that and protect everybody that's involved in our program."

Guarantano said, "there's a fine line" when asked about the passion of Tennessee fans.

"I get a lot of love, and if there are some bad things, then I hear about it," he said. "But I'm really not too worried about that.

"I'm really just worried about how my teammates feel about me and how the coaches react and feel about me, as well."

"I can't say enough about what kind of grit, determination, character that he has to hang in here," Pruitt said. "He's helped us kind of turn this season around."

The Gamecocks (4-7), who can't go to a bowl game, hope to ruin Clemson's playoff hopes by ending a five-game losing streak in the series.

Clemson is undefeated, but given the lack of strength in the Atlantic Coast Conference, a loss to South Carolina could knock the Tigers out of the playoffs.

"Like Coach [Will] Muschamp said, we can right a lot of wrongs by beating Clemson," South Carolina sophomore cornerback Jaycee Horn said according to the The Athletic website.

Muschamp said on his weekly television show that Clemson is the most important game South Carolina plays considering the in-state rivalry.

• Kentucky is going for its first back-to-back victories over Louisville since the Wildcats won four in a row over the Cardinals from 2007-10.

• If Mississippi State beats Ole Miss, the Bulldogs will be bowl eligible for the 10th consecutive year.

No. 4 Georgia at Georgia Tech

Florida State at No. 11 Florida

6,172 School-record yards of total offense for LSU this season after the Tigers gained 612 against Arkansas. The previous record was 6,152 yards in 2007.

14 Seasons Alabama Coach Nick Saban’s teams have won at least 10 games, including 12 in a row at Alabama.

Print Headline: LSU's Coach Orgeron apologizes to Hogs; 'by no means was that to demean them,' he says of post-game comment