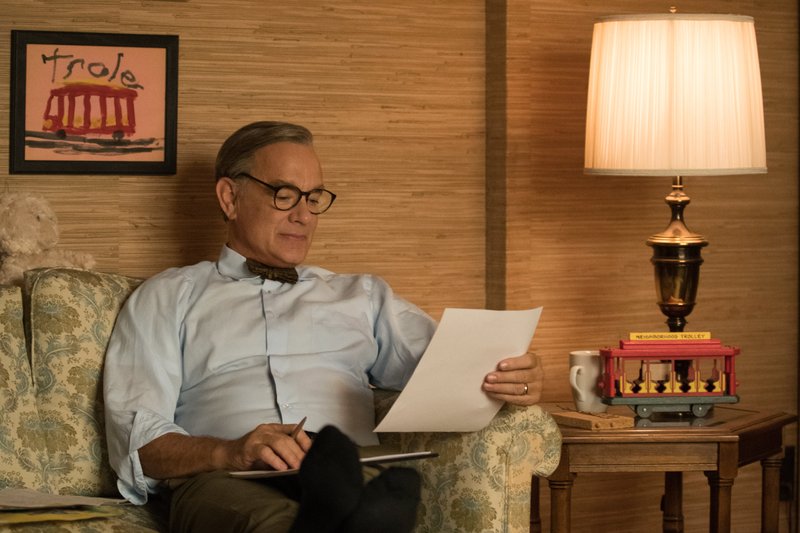 Fred Rogers, who died in 2003, is simply the gift that keeps on giving. He was the subject of one of the most unlikely box office phenomena of recent times when a documentary about him, Won't You Be My Neighbor?, became a theatrical smash with a $22 million gross in 2018, and now, he provides Tom Hanks with another trademark role in A Beautiful Day in the Neighborhood.

There's no question that Hanks is perfect in the part, as the actor's amiability and unquestionable sincerity make for an ideal match with the unique television personality. Marielle Heller's film itself, however, is a rather more modest achievement, sympathetic and yet entirely predictable in its dramatic trajectory of making a believer of an angry, cynical journalist.

A Beautiful Day in the Neighborhood

Rating: PG, for some strong thematic material, a brief fight, and some mild language

As everyone who had ever watched him knew, and as many others discovered to their surprise via the documentary, Rogers was the real thing, a genuine optimist who had a lot more to offer than simple homilies or can-do encouragement. He may have been an odd bird and seemed as folksy as the most extreme Jimmy Stewart character, but there were no life challenges that he would not confront.

The script by the team of Micah Fitzerman-Blue and Noah Harpster (Maleficent: Mistress of Evil) serves up very little that you can't guess after the first few minutes. Sullen Esquire writer Lloyd Vogel (The Americans' Matthew Rhys, who also played Daniel ­Ellsberg in The Post) can't believe he's being asked to go Pittsburgh to interview the TV phenomenon. Lloyd's grumpiness is exacerbated by his wife's demands after the arrival of their baby, and, boy, he looks like hell with his grungy little beard. But when he learns he only needs to write a 400-word piece, he grudgingly agrees.

It only takes a couple of minutes of watching Hanks go through the Rogers rituals on the familiar set of his show to know that you're in good hands -- that the actor will entirely deliver the Rogers persona physically, vocally and in attitude. In fact, it's easy to imagine that many people will relax into the movie so much that they'll forget they're watching an impersonation. The slow, easy, invariably honest and never condescending words that come out of his mouth, and the way Hanks invites you into Rogers' odd but convincing world provide the film's greatest pleasures. The actor persuades you to drop your guard and let the man's unique, if nonetheless a bit bizarre, means of communication take you by the hand and lead you to hitherto unexpected emotional and attitudinal places.

For a good while, however, Lloyd remains a doubting Thomas as well as a deeply troubled character. He's severely on the outs with his father Jerry (Chris Cooper), a roughhousing alcoholic and all-around S.O.B., and it becomes all too clear very early on that the goodness Lloyd will absorb from Rogers over time will lead to a reconciliation between the recalcitrant father and son.

Through the film's second half, there are pleasures that remain in further exposure to Rogers, and the brief time we get to see his wife make you wish there was more of her here (his two sons are seen not at all). But you want to press the fast-forward button well before everything gets tidied up with Lloyd and his relations, as there's nothing surprising or even interesting lurking in the final act, so rote are the proceedings.

Given that the journalist Vogel is based upon, Tom Junod, ultimately wound up writing a 4,000-word piece about Rogers that Esquire printed in full and won some big awards, one wishes the film had gotten around to looking at some of the other things they talked about, however briefly, just to expand its focus somewhat. The feel-good togetherness of the journalist's family at the end feels undeserved.

It's ultimately pretty much Hanks' show, and Hanks' show alone. One has long since taken the actor's gifts for granted and as soon as this film was announced, it was nearly a given that he would be perfect in the role. Well, he is, but it would have been great to see him in a few more varied situations.

After her fantastic first two features, The Diary of a Teenage Girl and Can You Ever Forgive Me?, it's a bit disappointing to see Heller taking on material with no edge at all. But the prospect of working with Hanks was understandably too great an opportunity to pass up, and she has done a perfectly reasonable job under the circumstances. Visually, however, the film could have been sharper, with more color and luster.