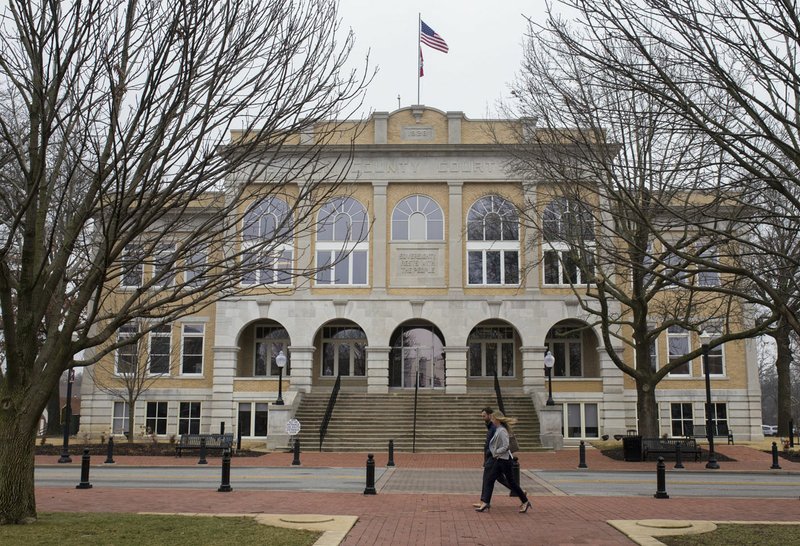 NWA Democrat-Gazette/CHARLIE KAIJO Benton County's special election to vote on building a new court facility begins March 12. If the proposed tax increase passes, the county would spend another $5 million to update the downtown Bentonville courthouse, including the courtroom on the third floor.

Nkiruka Azuka Omeronye's sentence Tuesday for contempt of court brought criticism from media and journalism organizations who called jail time too harsh and over reaching for recording in a courtroom.

Sgt. Shannon Jenkins, a spokeswoman for the Benton County Sheriff's Office, said Omeronye was released from custody at 5 p.m. Wednesday after Karren called the jail and gave her time served.

Karren wasn't available for comment Thursday morning and he wasno't in his office later that day.

Dorothy Tucker, the president of the National Association of Black Journalist, reported Wednesday on Twitter that Omeronye had been released from custody.

Karren sentenced Omeronye to 10 days in jail, but suspended seven of the days. She was to be released for work each day.

Omeronye, a reporter for KNWA/KFTA, admitted making an audio recording during an Oct. 7 hearing in Mauricio Torres' capital murder case.

She testified at her contempt hearing Tuesday she recorded only for note-taking purposes to ensure accuracy and she never intended to broadcast it. She apologized for her actions.

Karren found Omeronye deliberately recorded the proceedings and was in criminal contempt of court. Karren also placed her on six months of probation.

Omeronye was ordered to pay $250 in court costs.

The Arkansas Pro Chapter of the Society of Professional Journalists and the organization's Region 12 coordinator issued a news release Tuesday requesting Karren withdraw the jail sentence imposed on Omeronye.

"On behalf of KNWA/FOX24, we regret the incident regarding reporter, Nkiruka Omeronye, who goes by Nkiruka Azuka on air. Nikiruka has offered a sincere apology to the judge, to her colleagues, and to the station. As we do with all our journalists, we have counseled her on obeying all courtroom rules, as well as Arkansas Judicial Guidelines."