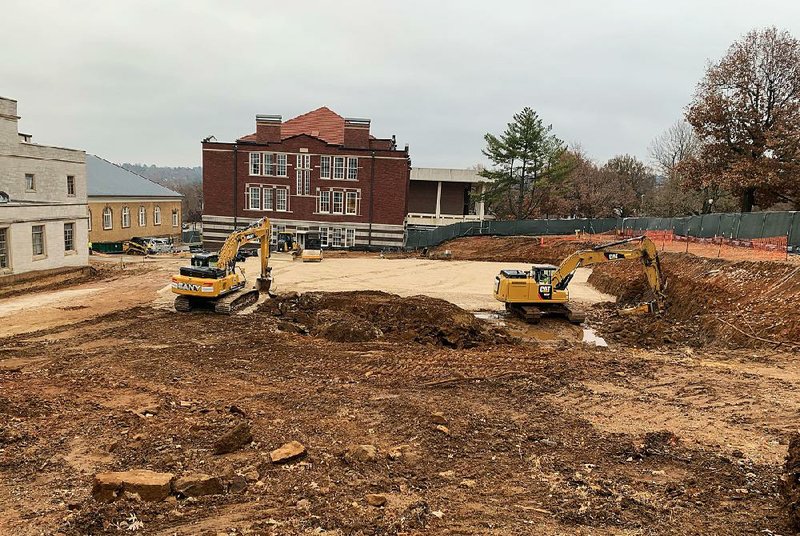 Work continues Thursday at the site of the planned student success center just north of Old Main on the University of Arkansas campus in Fayetteville.

FAYETTEVILLE -- A $5 million gift from the Walmart Foundation announced Thursday will help pay for a new 71,000-square-foot student success center at the University of Arkansas, Fayetteville.

The building, expected to open in early 2022, has an estimated cost of $45 million, according to UA officials. It will be near Old Main in what's considered the heart of the UA campus.

Once built, the center will house academic support services and other programs.

"We are appreciative of the foundation's continued support of our students and recognize that investments like this will help students who have unmet financial, academic and social needs achieve academic success," Chancellor Joe Steinmetz said in a statement.

UA spokesman Mark Rushing said the project cost will be paid for with a mix of general obligation bonds, central administration reserves and money paid to the university from its dining contract with Chartwells. The center's second floor will be named the Walmart Foundation Academic Excellence Hub.

"There is a movement within higher education to create one-stop student success centers so that students don't have to go to multiple different offices across campus to get certain related services," said Kevin McClure, an associate professor of higher education at the University of North Carolina Wilmington.

In 2018, the University of Arkansas at Monticello opened a two-story, 35,300-square-foot student success center with an outdoor dining area at a cost of $8.5 million, according to the school.

The four-level UA project aims to fit in with nearby "distinctive, historic, stone-clad collegiate buildings," according to a university video that shows images of how the building will look once completed. The building is being designed by HBRA Architects of Chicago and Core Architects of Rogers.

Flourishes include a central skylight and a terrace room with tall windows, according to the video, which also refers to the building having a Starbucks and a "concept dining concession." An outdoor courtyard with seating will be "an amenity for the center as well as the broader campus," the video states.

Francis, in an email, said the term "studio" is used for this and other planned programs "to emphasize to students the importance of co-creating ideas and plans during their time in the Student Success Center."

Francis said UA's 360 Advising Studio uses historical data on grades, retention and graduation, plus "data derived from scholarship records and financial aid applications." The idea is that advisers, by using the data along with a student's early progress grades, "can effectively intervene in response to early indicators of student struggle."

Rushing said construction company VCC is the general contractor for the project. The company has offices in Fayetteville and Little Rock and other cities.