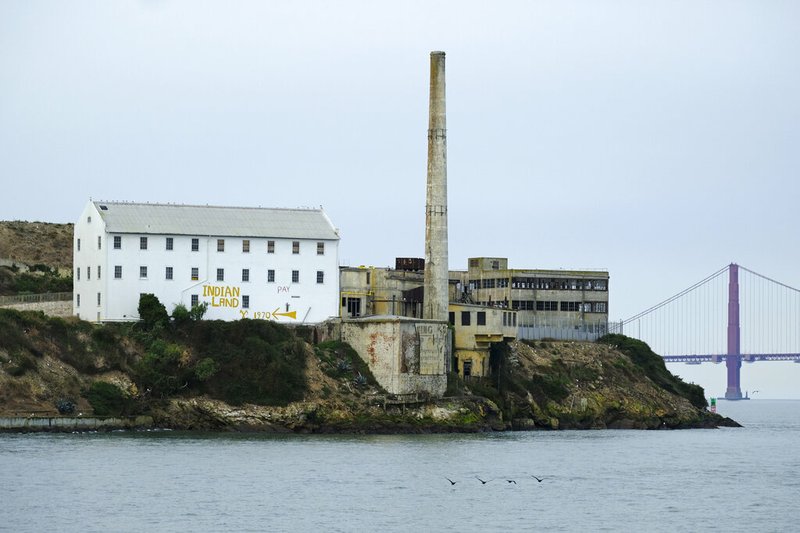 In this photo taken Friday, Nov. 15, 2019, the words "Indian Land" are painted on a building on Alcatraz Island with the Golden Gate Bridge in the background in San Francisco. The week of Nov. 18, 2019, marks 50 years since the beginning of a months-long Native American occupation at Alcatraz Island in the San Francisco Bay. The demonstration by dozens of tribal members had lasting effects for tribes, raising awareness of life on and off reservations, galvanizing activists and spurring a shift in federal policy toward self-determination. (AP Photo/Eric Risberg)

FLAGSTAFF, Ariz. — On a chilly November night 50 years ago, a 7-year-old Peter Bratt, his four siblings and their single mother left their San Francisco home for the pier. From there, they joined a group of indigenous activists on a small boat, bobbing in fog and rolling over what felt like tidal waves.

They eventually landed at their destination — Alcatraz Island. At first, all the young boy could see was a vast, "magical" playground. He and other children roamed the beaches, literally blazing their own trails. They explored buildings that once housed prisoners, including Native Americans incarcerated there nearly a century earlier.

Despite his age, Bratt quickly comprehended that the adventure was the start of a movement. The adults banded together to take back a body of land that they felt didn't belong to the U.S. government to begin with.

"I remember seeing these young Indian people from all over the country shouting to the world, 'Red Power! You're on Indian land,'" said Bratt, 57, the older brother of actor Benjamin Bratt. "Whoa, that was a game changer. I felt like I was finally home."

The 19-month occupation of Alcatraz, which started Nov. 20, 1969, is widely seen as a seminal event that reinvigorated tribes to organize in the face of a U.S. government steamrolling over their land, their rights and their identities. Many Native American activists today say they are still struggling to have their voices not only heard but respected. They point to recent examples like their ongoing fight against a proposed oil pipeline near the Standing Rock Indian Reservation in North Dakota that they argued would contaminate water. President Donald Trump's administration approved a final permit for it early in his term.

Alcatraz was the beginning of something, according to Bratt. His mother, who is indigenous to Peru, was among those keeping the momentum going. Their San Francisco home became a haven for Native American activists who were fighting for issues including sovereignty and treaty recognition. It also provided heroes for younger Natives beyond figures in history books.

"I think movements and events like Alcatraz and the Wounded Knee standoff, I think they gave us new role models and new warriors to look up to," said Bratt, who visited Alcatraz earlier this month.

The 21-acre rock in the middle of San Francisco Bay was a military prison before it served as a maximum-security federal penitentiary. Some of its earlier prisoners included 19 Hopi men incarcerated in 1895 after resisting cultural assimilation, according to the National Park Service website.

Occupiers argued they had a right to Alcatraz under an 1868 treaty the U.S. government signed with the Sioux that said abandoned government land would be returned to indigenous people. After the federal prison there closed in 1963, it was declared surplus property, a necessary step in selling it or transferring ownership.

Donations came in from around the world, and the occupiers set up a clinic, a live broadcast and a school system for children on the island.

But the coalition of tribes knew it likely wouldn't get what it wanted: the deed to Alcatraz, a museum, cultural center and university built there, sustained federal funding and a seat at the table in administering national parks. 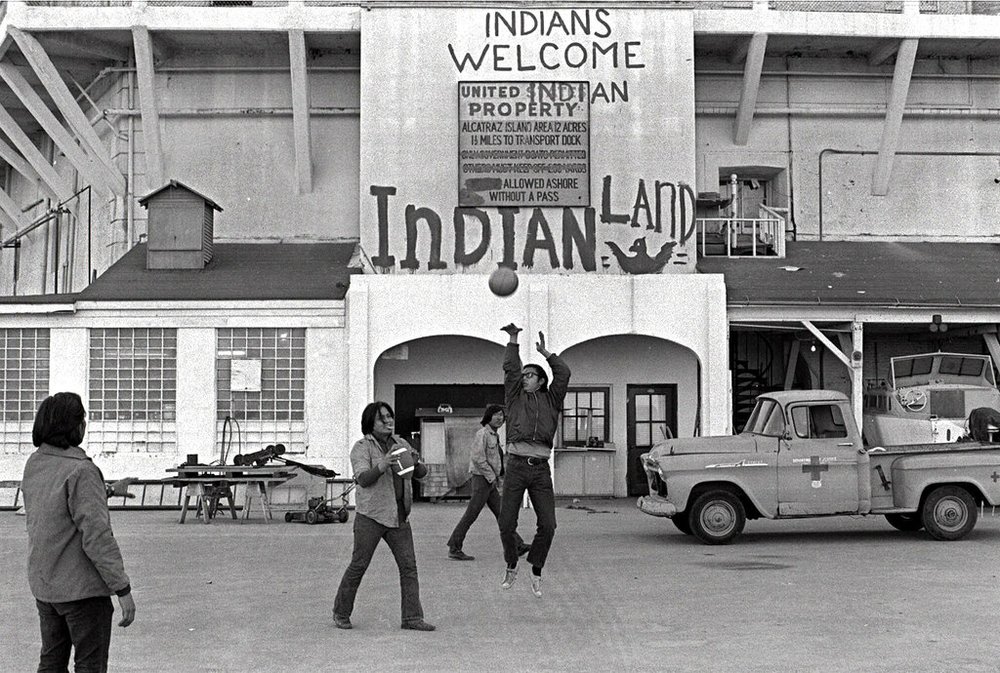 In this Nov. 26, 1969, file photo, Native Americans play ball games at the main dock area on Alcatraz in San Francisco during their occupation of the island. The week of Nov. 18, 2019, marks 50 years since the beginning of a months-long Native American occupation at Alcatraz Island in the San Francisco Bay. The demonstration by dozens of tribal members had lasting effects for tribes, raising awareness of life on and off reservations, galvanizing activists and spurring a shift in federal policy toward self-determination. (AP Photo/File)

Over time, the occupiers dwindled. Students returned to college. One of the main organizers, the late Richard Oakes, left after a few weeks when his daughter was killed in an accidental fall from a stairwell. Infighting among demonstrators created factions, and Alcatraz eventually became more of a place for transients looking for food and shelter. Armed federal officials removed the last of the occupiers in June 1971.

"It really kind of showed what the focus of Native American people was and, basically, our rights as sovereign nations," he said. "Treaty rights as opposed to civil rights, equal rights that the other minorities were pushing."

It was to be a continuous push that exists today through protests and court battles centered on treaty rights. Under a list of things to do while on Alcatraz, the occupiers wrote: "Set stage for next action! (Win one battle first ... then move again!!)"

After the occupation, American Indian Movement members asserted treaty rights in the takeover of a U.S. Bureau of Indian Affairs building in the nation's capital, at the site of an 1890 massacre on a South Dakota reservation, and on the road as hundreds of tribes caravanned across the U.S. in what was called the "Trail of Broken Treaties."

The Alcatraz occupation also helped spur a shift in federal policy toward self-determination, allowing tribes to take over federal programs on their land — and a shift away from policies that sought to rid them of their culture, language and traditions.

Although then-President Richard Nixon increased the budget for the U.S. Bureau of Indian Affairs, it's underfunded today. The agency that oversees schools, police forces and road maintenance on reservations can't meet the needs of the more than 2 million Native Americans across the country. Its funding also isn't shielded during government shutdowns, and neither is the Indian Health Service, responsible for primary health care for Native Americans.

Those services are supposed to be guaranteed through various treaties, tribes say. 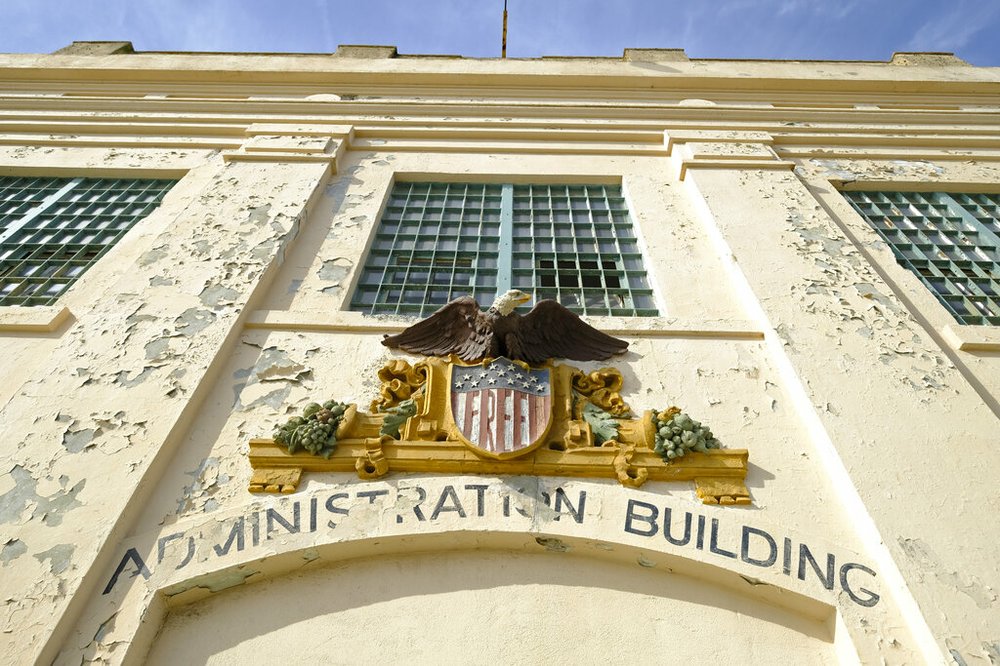 In this photo taken Tuesday, Nov. 12, 2019, the word "Free" is painted below an eagle figure that hangs on the entryway to the main cell house on Alcatraz Island in San Francisco. The words were added during the Native American occupation of the island. The week of Nov. 18, 2019, marks 50 years since the beginning of a months-long Native American occupation at Alcatraz Island in the San Francisco Bay. The demonstration by dozens of tribal members had lasting effects for tribes, raising awareness of life on and off reservations, galvanizing activists and spurring a shift in federal policy toward self-determination. (AP Photo/Eric Risberg)

LaNada War Jack, a member of the Shoshone-Bannock Tribes, was in her 20s when she helped plan the Alcatraz takeover. She points to recent decisions by the federal government to relax environmental laws and policies that don't fully allow Native Americans to oversee public safety on their reservations as signs these battles are ongoing, and much work remains to be done.

"We're really digressing rapidly, and we need to speak up and say something again and try to get some unity and some support and wake up the people in America," she said.

Robert Free also participated in the occupation, leading the raising of a teepee that became a demonstrators' meeting spot. He revisited the island over Veterans Day weekend.

Just like 50 years ago, Peter Bratt helped Free put up a teepee with the help of several Native teens. It will remain there until early January. But Free wants it to be a permanent monument to the beacon it became for subsequent protests.

"The Alcatraz occupation drew people from across the country and inspired people across the north continent and south continent and central America," said Free, now 70. "All these people came and gave us lost souls direction. We were rediscovering ourselves."

Tang reported from Phoenix. Fonseca and Tang are members of The Associated Press' race and ethnicity team. 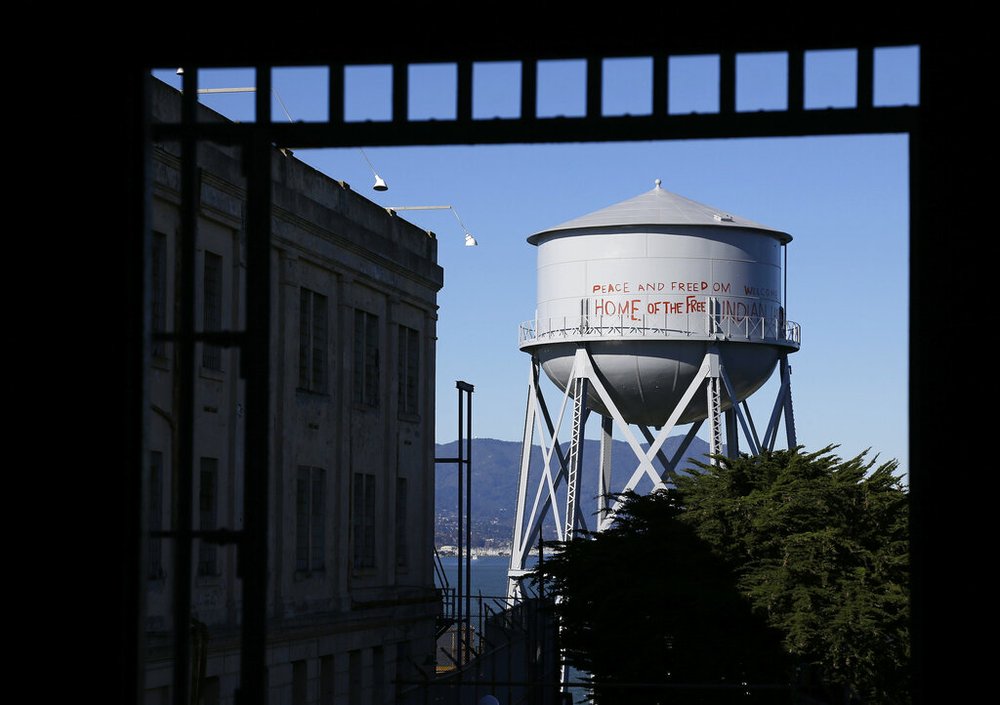 This Jan. 14, 2013, file photo, shows a restored water tower with words that read "Peace and Freedom Welcome Home of the Free Indian Land" seen through an entryway to the main cell house on Alcatraz Island in San Francisco. The words were first written on the water tower during the Native American occupation. The week of Nov. 18, 2019, marks 50 years since the beginning of a months-long Native American occupation at Alcatraz Island in the San Francisco Bay. (AP Photo/Eric Risberg, File)
ADVERTISEMENT