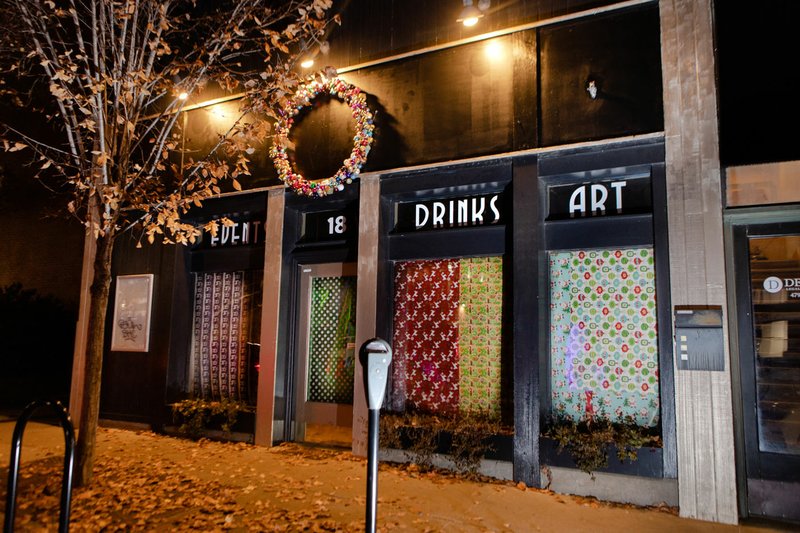 Photo courtesy Anna Hutchinson Photography "We love a good collaboration, whether it's with musicians at Maxine's who have never played together or local farmers providing food at Leverett Lounge -- whatever we can do to highlight all of the cool things in our area," says Holidaze co-creator Hannah Withers. "That's what we live for."

The duo behind some of Northwest Arkansas' most popular dining and beverage establishments have announced an exciting holiday event. Hannah Withers and Ben Gitchel -- owners of Leverett Lounge, founder and former owners of Little Bread Company and co-operators of Maxine's -- have revealed that they'll be opening a "charitable holiday pop-up cocktail lounge" Nov. 21-Dec. 31 to coincide with Fayetteville's Lights of the Ozarks.

"We've been to other cities where there has been this sort of thing," says Withers of the origination of the concept. She says they were focused on making Holidaze "local-centric" and benefiting "all of these organizations that have causes we really believe in and who have been so supportive of what we've been doing."

WHERE — 18 E. Center St. in Fayetteville

The lounge will donate 25% of each night's bar profits to three organizations: KUAF 91.3, NWA Equality and Magdalene Serenity House. Each of the organizations will have two special event nights through the holiday season: NWA Equality will host Out and About Happy Hour on Dec. 5 and a Holidazzle Diva Drag show on Dec. 27; Magdalene Serenity House will host an egg nog competition on Dec. 19 and a women's musical showcase on Dec. 28; and KUAF will host All Drinks Considered, a cocktail competition between KUAF operations manager Pete Hartman and KUAF "Ozarks at Large" host and creator Kyle Kellams on November 24 and Friendsgiving Vinyl Night on Nov. 29.

"We'll come up with some cocktails, and people will be able to vote for them," says Kellams of the competition KUAF has planned. "I know I can create something. But it reminds me of years ago, when I was invited to create a piece of art for a charity event, and it turned out horribly. You won't get a lot of cocky boasting out of me. But I'm going to have fun trying."

At 18 E. Center St. -- the former Stage 18 space -- Holidaze will be ideally located for those visiting the Fayetteville square for Lights of the Ozarks. Food will be provided by Michael Robertshaw and Meredith Butler's Persephone on Wheels, a popular food truck that describes its menu as "fresh takes on Mediterranean street food." The decor, true to its name, will be aggressively Christmas-themed.

"We reached out to everyone we could think of to collect Christmas things," says Withers, who is no slouch when it comes to theming: Maxine's -- a Fayetteville tradition that landed on both the USA Today and Esquire magazine's list of Best Bars in America in 2019 -- was decked out in a Beetlejuice theme for Halloween. "We've got a lot of brightly colored Christmas trees, a ton of the Christmas blow molds. I really think it's going to be fun."

Withers is quick to point out that a venture like this one takes a lot of teamwork, from the employees who will work throughout the holidays to Lynn Wade, the building owner, who Withers says "has been really gracious about allowing us to transform his space."

"We love a good collaboration, whether it's with musicians at Maxine's who have never played together or local farmers providing food at Leverett Lounge -- whatever we can do to highlight all of the cool things in our area. That's what we live for."