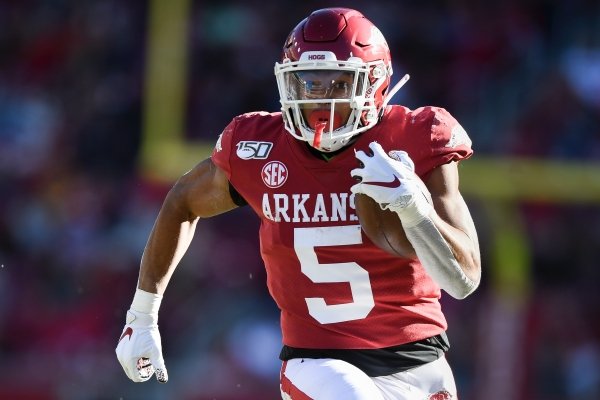 Arkansas running back Rakeem Boyd (5) carries the ball for a 52-yard touchdown during a game against Mississippi State on Saturday, Nov. 2, 2019, in Fayetteville.

FAYETTEVILLE -- The change at the top of the University of Arkansas football program has seemingly led to a wide-open quarterback battle for the Razorbacks the final two games.

Interim Coach Barry Lunney Jr. said Wednesday that the coaching staff wanted the four quarterbacks who have played this season -- senior Ben Hicks, junior Nick Starkel and freshmen John Stephen Jones and KJ Jefferson -- to have a chance to "re-establish" themselves.

While uncertainty attends the quarterback position, there's one sure-fire definite for the Razorbacks with three weeks remaining in what has turned into a dreary season.

Rakeem Boyd is the man.

The junior tailback surpassed the 1,000-yard mark last week, making him the first Arkansas tailback to hit that milestone since Rawleigh Williams III in 2016.

In one of the best showings at home by an Arkansas tailback since Darren McFadden helped christen Frank Broyles Field with an SEC record-tying 321 rushing yards in a 48-36 victory over South Carolina on Nov. 3, 2007, Boyd ripped through Western Kentucky for 185 yards on just eight carries.

The 6-foot, 213-pounder had touchdown runs of 76 and 86 yards to account for two of the Razorbacks' three touchdowns.

"Rakeem's been a really steady force for us," Lunney said. "He's competed really hard each game. He's battled through some bumps and bruises, which you have to in this league as a running back."

Boyd's eight rushing touchdowns are tied for eighth in the SEC.

"I think he's really taken his approach to the game to a new level, just from a professional standpoint," Lunney said. "Jeff Traylor, our running backs coach, who does a fantastic job with all of our backs, has really done a great job of improving I think Rakeem's mental side of how he approaches the game, and I think that's showed up on the field."

Jefferson took the first reps with the top offense Wednesday and again Thursday during the start of the fourth period when the media left the Walker Pavilion.

Since halftime of the Razorbacks' 54-24 home loss to Mississippi State on Nov. 2, Jefferson and Jones have split all the quarterback reps as part of a youth movement at the position. Starkel and Hicks had five and four starts, respectively, through the first nine games.

Arkansas quarterbacks have combined for 51.1% completions, ahead of only Kentucky (50%) in the SEC. They have thrown a league-high 15 interceptions, five more than Tennessee, which has the second-most.

The quarterbacks rank 10th with 204.8 passing yards per game and 11th with 11 touchdowns, but their efficiency rating of 102.39, which takes into account touchdowns, interceptions and yards per pass, is 13th, ahead of only Vanderbilt (100.7).

The passing game has stalled out in recent games. The Razorbacks have not passed for 200 yards in a game since Starkel and Hicks combined for 297 yards in a 24-20 loss to Texas A&M.

In the first five games, the Razorbacks averaged 289.8 passing yards per game. In the last five, the average is 119.8 per game. Arkansas' 87 passing yards against Western Kentucky in Saturday's 45-19 loss marked the first time the team had not thrown for 100 yards in a game since a 49-28 win at Texas Tech in 2014. The Razorbacks ran for 438 yards and passed for 61 in that game.

Lunney said Wednesday that the tight ends, now minus senior standout Cheyenne O'Grady, were doing an "admirable" job under the circumstances.

"Really, truthfully, we haven't really had a lot of opportunity to make a play," Lunney said. "Part of that is we haven't gotten into a rhythm offensively. We've had a lot of three and outs and a lot of our playmakers haven't had a chance to get involved.

"When you don't get momentum and you don't get some rhythm it's really hard to get into your game plan and get the ball distributed to the people that need it. Hopefully we can develop some kind of a rhythm here to where we can stay on our tracks and create those opportunities."