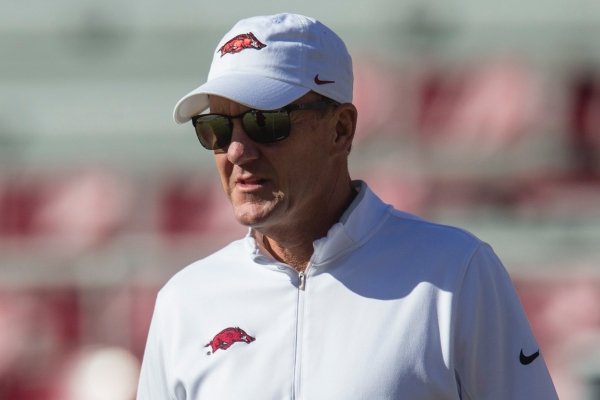 • This is a list of tweets compiled Sunday by Richard Davenport of the Arkansas Democrat-Gazette on the firing of Arkansas football Coach Chad Morris:

"Whoever we bring in I hope they can keep our home grown talent in state. If you look back the majority of the time when we've had successful teams the core group of guys are from Arkansas."

"And to the high school recruits coming out let's keep that talent in state and get our program back on track!!!"

"As a guy who played at 18 stop blaming the kids you have and start developing them. The recruiting blame game isn't the answer: coaching them up is. Today should be about the seniors either way."

"AMEN! This is NOT a player problem. 4 out of the 5 years I was at the UofA. I honestly felt like I improved my game in 1 or more areas. Year 5 that wasn't the case. These coaches are good guys just not sure if they know how to develops players and come up with game plans."

"These coaches talking like they have CTE. Only thing needed to be fix was that defense of scheme from 1857. How you do run the same defense year in and year out with no tweaks and you been in the same conference almost your whole coaching career."

"This is beyond me. I'm speaking out Cause these people had me playing 3Tech on most calls last year. That should explain the coaching right there."

"There is without a doubt in my mind that @CoachSamPittman is the perfect fit for @RazorbackFB. The best recruiter in the country and the best coach in the country. #WPS"

"I never wish anybody any pain, but God sees everything and He will humble you if you aren't living right no matter who you are!"

"I remember the first meeting him telling us if y'all was doing things right I wouldn't be here .. lol well have the tables turned"

"Intensity, culture, effort-habit, finish, attention to detail....i wanna hear and see this from our next coach."

"Thank You Coach Morris [heart emoji] Forever grateful for the opportunity you gave me to continue to play the game I love."

Print Headline: What they said: Tweets on Morris firing