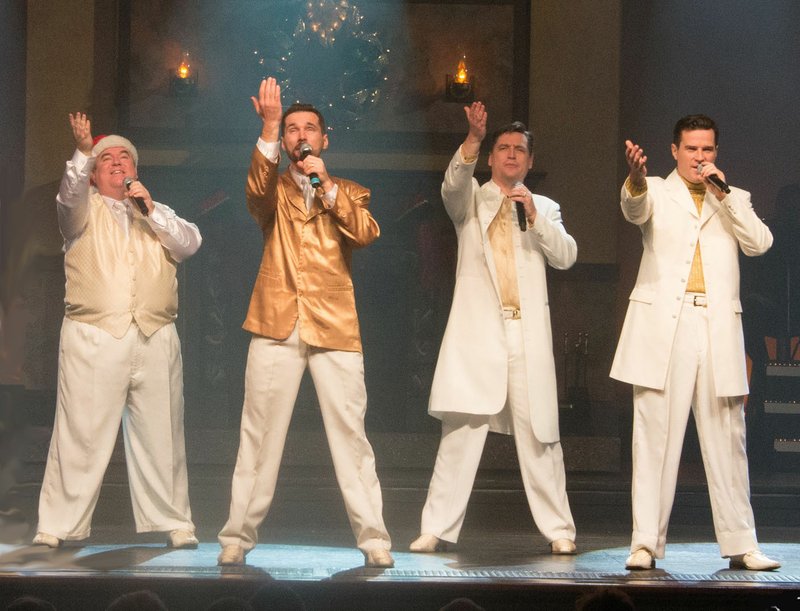 Courtesy Photo After 25 years, Marty, Ryan, Jason and Andy Hughes (left to right) continue to make music in Branson with the help of their 36 children. Brother Adam, one of the original performers in the show, is in California right now handling family obligations, Jason Hughes says, but they all hope he'll be back someday.

Jason Hughes says fans ask him what a family reunion is like at his house. "It's just like any other day," he says with a shrug and a chuckle. As one of the music-making Hughes Brothers, Jason spends all his working hours with members of his family -- which has grown way beyond the five siblings who came to try out their talent in Branson 25 years ago.

Nowadays, the show -- at their own theater on "the strip" -- includes oldest brother Marty's 15 children; nine of Jason's 10 -- one is on her mission for the Church of Jesus Christ of Latter-day Saints, but Jason's wife is expecting, so it evens out; their next brother has seven children; and the next four. So that's 36, he enumerates, ranging in age from 26 to 4 months old.

Fans who just did the math realize one brother is missing: Adam is currently living in California with his family, taking care of his in-laws. "We hope he'll come back when he can," Jason Hughes says.

But the Christmas show must go on, and this year is no different.

"Initially, a lot of the ideas were my mother's," says Jason, "but also a lot of the things in the Christmas show are things my brothers and I had done even before we came to Branson. Christmastime was always one of busiest times when we still lived in Utah, because every business had a Christmas party."

At a lot of those corporate gigs, he says, people used to tell the brothers they'd be big hits in Branson -- and he remembers wondering, "Where?" But when the Osmond Brothers started a show there and got a lot of press, the description of "this enchanting place in the middle of the country in the Ozark Mountains where people from all around would come to hear music" began to capture their attention. And once they'd worked a week as special guests at Silver Dollar City, "we decided well, if we're ever going to be a performing group and do this full time for our profession, we might as well go for it." So they sold the family business -- a fence company -- in Utah and took "the big leap."

Now, he produces the Christmas show, and it's "a lot different today than that first year -- when it was just a matter of getting five brothers together," he says. "We could do that in a week. But now we've got 45 people on stage, and the production values are so much more complicated. We do have a lot of bells and whistles -- the latest lights and sound equipment and all of that stuff -- but the technical aspects are more enhancements than a feature."

Hughes says the first act is "all about the traditional Christmas of family getting together and all of the fun Christmas songs of the past -- lots of dancing, everything from polka to swing, tons of harmony and different groups of people who do numbers, including the kids, who do a real souped-up version of 'Santa Claus Is Coming to Town.'"

But Act II is his favorite, he admits, when Santa Claus "narrates the symbols of Christmas and how they point toward Christ."

"Red stands for the atonement of Christ paying for our sins, and that's one of my favorites, Mary Pulled the Shawl, a song from Mary's perspective how she felt about raising Jesus," he says by way of example. "It's a beautiful song, but also interpretive dance happens where the dancer represents Mary and has a red shawl that she uses as the baby and by the end it's placed over her head as she watches her son be crucified."

The show ends with "Joy to the World," and that's exactly how Jason Hughes would describe life with his brothers.

"There are times it's really difficult, but most of the time, it's just wonderful," he says. "We still are a family, we're not perfect, so we don't always agree. But it's awesome to know we all have the same values, the same goals, we're all striving for similar things. It just helps us be even closer."