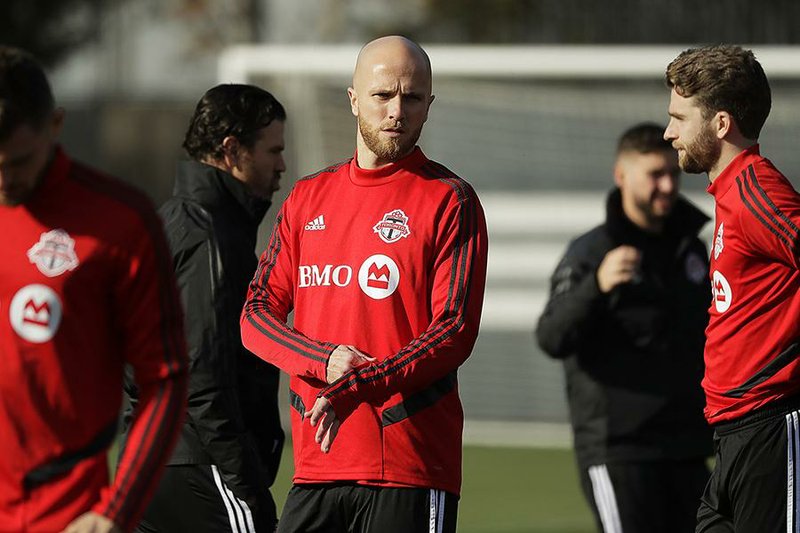 Questions over midfielder Michael Bradley’s future with Toronto FC loom as the team prepares for Sunday’s MLS Cup championship against the Seattle Sounders.

SEATTLE -- When Michael Bradley left Italy and returned to Major League Soccer to join Toronto FC, he was the secondary attraction. Most of the attention was on Toronto's simultaneous acquisition of striker Jermain Defoe.

Six seasons later, Defoe is long gone and Bradley is secondary to no one in Toronto. For the third time since making the move back to MLS in 2014, Bradley will captain Toronto in the MLS Cup final Sunday against the Seattle Sounders.

As much as Bradley has become synonymous with Toronto, there is a bit of lingering unknown about the 32-year-old midfielder. His contract with Toronto is thought to be expiring at the end of the season, although a report this summer indicated Bradley may not be going anywhere, especially if his underdog team can win a second championship trophy.

"We don't pay whole lot of attention to who the favorites are, who the underdogs are. We feel good about the group that we have," Bradley said. "We feel like we continue to improve even as the season gets toward the end. And if we can continue to do all the things that we've done over this last stretch, then we're going to walk on that field with confidence and a real feeling that we can be the team lifting the trophy at the end of the day."

The concern about Bradley's future may become a moot point if Toronto wins. The Athletic reported over the summer that Bradley's contract -- which paid him $6.5 million this season -- has an option for the 2020 season and will be automatically triggered if Toronto wins the title.

Both the player and the team have stayed quiet about Bradley's contract situation and the option seemed unlikely at the time of the report with Toronto loitering in the middle of the Eastern Conference standings for most of the season. Even when Toronto got hot in the second-half of the season and earned the No. 4 seed for the playoffs, it still didn't seem highly possible.

But after upsets of New York City FC and Atlanta United on the road, Toronto and Bradley are on the cusp of an unlikely championship run.

"When July came around and we finally felt like we had our group back together, everybody was back from the Gold Cup, we'd started to add a few new faces, that was more or less the halfway point," Bradley said. "And everybody looked at each other and understood that if we wanted to have a real chance at the end of the season that we had no time to waste. So we had to take every game and play it like it was a playoff game and our season was on the line because that was our reality at that point."

Bradley is right about the turnaround that started after players returned from the Gold Cup. Toronto is undefeated in its last 13 matches, regular season and playoffs (7-0-6) ,and has won four consecutive overall going back to the final day of the regular season. Toronto's last league loss was a 2-0 defeat Aug. 3 at the New York Red Bulls.

Toronto has been without Jozy Altidore for the last month because of a quad injury that has him as a major question for Sunday's final. Alejandro Pozuelo is the latest European star added to Toronto's lineup and was at his best in the playoff upset of NYCFC. But it's been the likes of Jonathan Osorio, Nick DeLeon and Nicolas Benezet scoring critical goals during the postseason to get Toronto into the final.

But the midfield drives Toronto's success and Bradley is the conductor of that group.

"With their three midfielders, with Osorio and Marky Delgado, they understand him completely," Seattle midfielder Cristian Roldan said. "They play the game that he wants them to play in that they cover a lot of ground and all the gaps that needs to be covered. The fact that those three have been so solid in the midfield for the playoffs is what is making their team so much better."