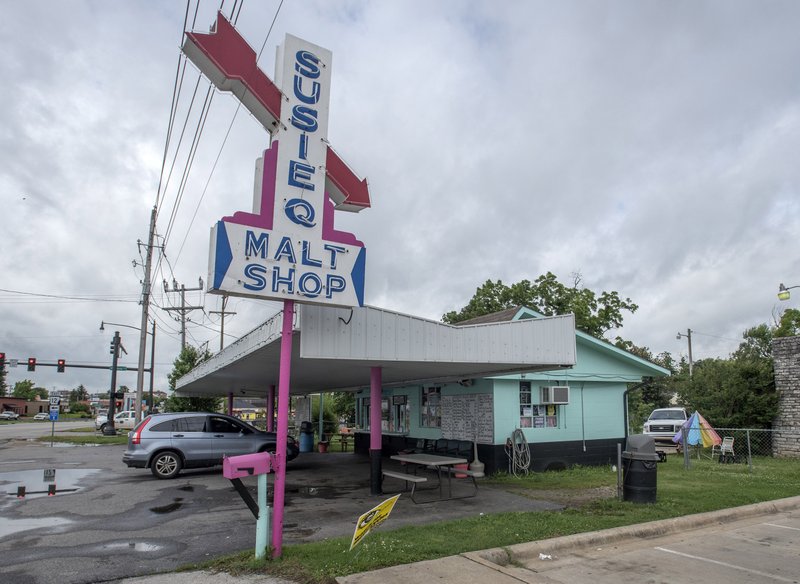 Suzie Q Malt Shop in Rogers will celebrate 55 years in business Saturday June 20, 2015. The business has changed little since opening in 1960. - Photo by J.T. Wampler

One subject often comes up in the barber shop and places where people who love Rogers history congregate: What are the oldest continuously owned family businesses still operating? 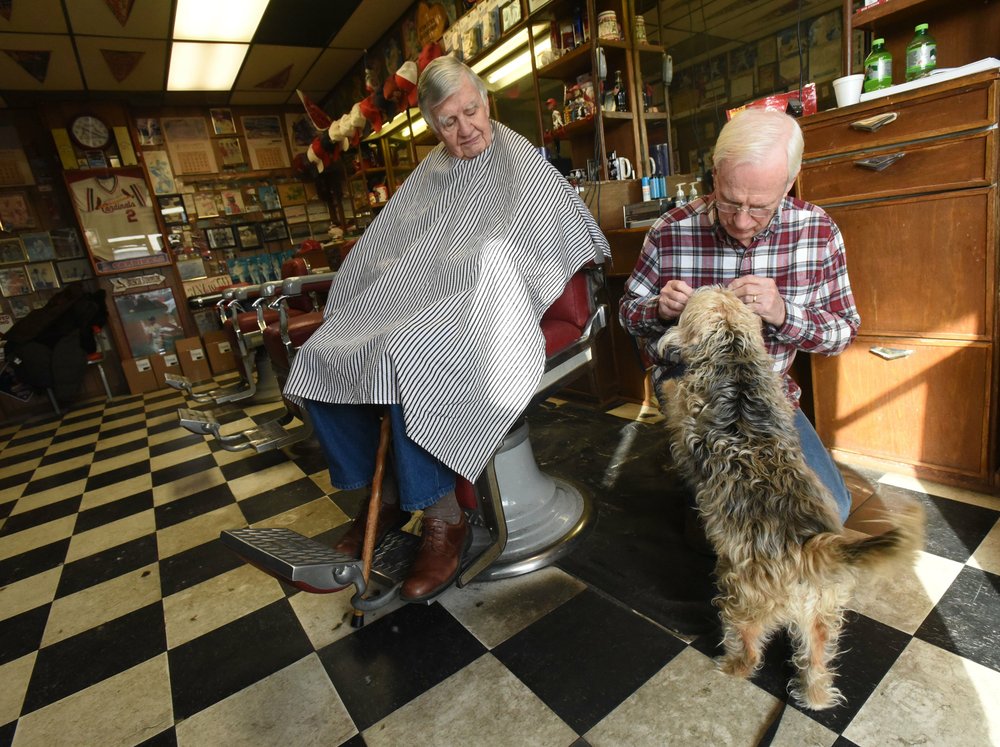 Gary Townzen feeds a doggie treat to Tootie on Thursday Dec. 20 2018 at his barbershop in downtown Rogers.

The Townzen business began with local barber and city alderman Gary Townzen's grandfather, Arthur Townzen. Arthur started cutting hair at the age of 12 in 1915 in the back of a gas station in Missouri. At the time, there were no licenses or regulations for barbers. Young Arthur had to stand on a box to cut hair and charged 10 cents per haircut. The family moved to Rogers about 1924, and Arthur cut hair in the Rogers House Hotel on Arkansas Street near Ben Moore's Old Time Auto Body Shop. Haircuts and shaves were still 10 cents each, and Arthur provided 85 shaves on his best day -- making $8.50, which was big money. However, on most days he would average about a dollar a day. About 1927, Arthur moved to the Palace Barber Shop at 101 N. First St. and bought the shop from Charley Brogan.

Arthur Townzen served in World War II and came home and continued to cut hair. In 1948, Arthur's son and Gary's dad, Herschel Townzen, joined the shop, and they both cut hair in the Palace until 1959. The Townzens approached Fred Hunt, the owner of Hunt's Department Store at the southwest corner of First and Walnut streets, and asked to rent some space. Fred stepped off an area in the back of Hunt's and walled off the present shop at 104 S. First St.

Gary Townzen never had any doubt about his chosen profession. He related the story: "In 1956, when I was about 6 years old in the first grade at Northside, Mr. Reddick, the janitor, asked me what I was going to be. I said a barber without hesitation."

Grandfather Arthur and Paul Burr continued to work with Gary until about 1975. Arthur died in 1985 at the age of 82. Paul Burr worked all of his adult life with the Townzens from 1956 till 1992.

Gary Townzen has always been a fanatical Cardinals baseball fan, and through the years he acquired a huge amount of Cardinal memorabilia, making the shop an authentic Cardinal museum.

Gary continued to cut hair and entertain his customers until last year, when the shop was temporarily displaced for renovations. Owner John Mack is currently renovating and restoring the entire Opera Block corner from 104 S. First St. to 106 W. Walnut St. Presently, Gary is working in Bobby Prince's Bob's Barber Shop at 122 S. Second St. while renovations are under way. Hopefully, soon Townzen's Barber Shop and Cardinal baseball museum will return to the well known location of First Street. 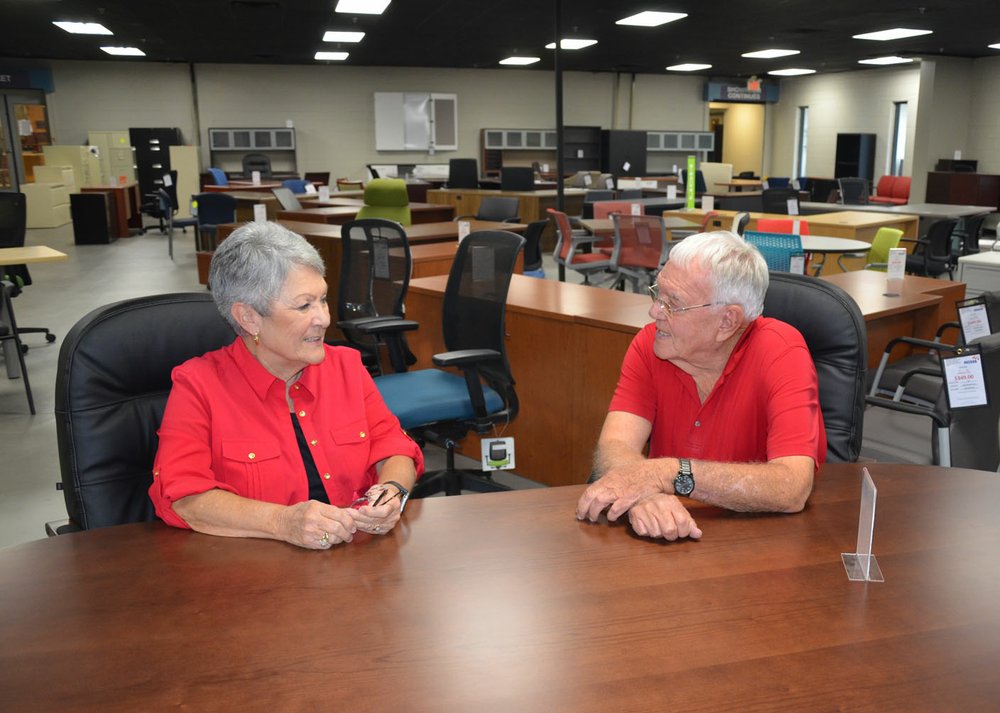 The second oldest continuous family business is Moser Manufacturing at 601 N. 13th St. I recently met with owners Harley Moser Jr. (Butch) and his wife and partner, Lynda, for a tour of their huge 100,000-square-foot facility. I was amazed that this company that started in 1950 as a two-man cabinet shop has continued to expand for 69 years and is continuing to thrive and grow.

The story of Moser Corporation began when Harley Moser Sr. married Phyllis Simpson. He got a job as an apprentice in a cabinet shop in St. Petersburg, Fla. During World War II, he served in India, Burma and China. While he was serving, his wife, Phyllis, moved with her parents to Rogers. When asked why he chose Rogers as his permanent home, he replied, "I have been all over the United States and many countries over the world, but Rogers was the best looking thing that I ever saw." Harley worked as a cabinet maker and carpenter for his father-in-law, O.S. Simpson, for about two years. Simpson was the job superintendent on many historic structures in Rogers including Kirksey Gym and Southside Elementary School.

Harley Moser Sr. began a two-man cabinet shop at 1215 W. Walnut St. in 1950 with Lee Williams as partner. That partnership dissolved, but Moser acquired a contract to build comb display cases for Ace Comb Co. of Booneville. This contract in addition to his regular business caused him to outgrow the building on Walnut, so he built a new 8,420-square-foot building on North Thirteenth Street. His next major contract was to make wood stocks for Daisy BB guns. They made thousands of gun stocks over a three year period.

In the mid-1950s, Greer Lingle, Rogers School superintendent, asked Moser to build some tables for the schools and make some desks for the teachers. That started a tradition that exists to this day -- manufacturing furniture for schools. Moser Corporation for many years has specialized in producing a complete line of school classroom cabinets and mobiles, library furniture, science furniture, office furniture and custom architectural millwork. The company still makes furniture and millwork for many schools, hospitals and office buildings using ultra-modern machines programmed on a computer along with traditional methods. Today, custom manufacturing comprises about 25% of their business.

Through the years, the company evolved into a second division for retailing and wholesaling over 200 different lines of furniture not made by Moser. This division has the largest office furniture store in Northwest Arkansas and accounts for about 75% of their business today.

In 1987, Moser began its third division, selling retail office and school supplies in a huge showroom in their facility. For many years it was the premier school supply store in the region. They also serviced many of the larger corporations with their office supply needs. However, that part of the business was dropped recently when customers began buying supplies online.

The Moser Corporation is one of the best success stories in Rogers' history. Butch and Lynda Moser and general manager, Bucky Hults, are optimistic that the company will continue to expand and prosper into the future. 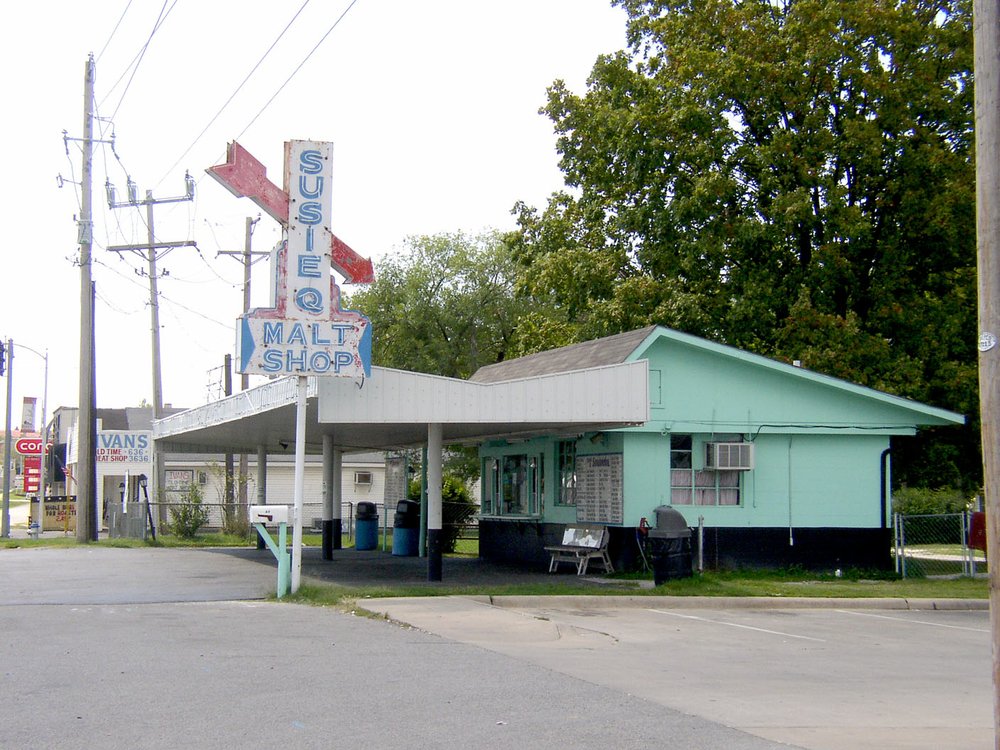 Photo courtesy James Hales Susie Q Drive In is pictured in 2006 in this photo. It is the only 1960s era drive-in left in Rogers. The historic neon sign was destroyed in an accident in the ice storm in January 2019.

According to my records, the third oldest family business is the Susie Q Drive In at 612 N. Second St. In June 1960, Mildred Head opened the Susie Q Malt Shop downtown, with her niece, Patsy Head Simmons, as her only employee. Patsy was in charge of drinks and ice cream, and Mildred operated the grill. Tamra Potter-Mott shared her memory of the Susie Q on the Friends of the Rogers Historical Museum Facebook site: "Going to the Susie Q was a treat for us. We loved their cherry Cokes and curly fries."

The drive-in at the corner of North Second and Locust streets is the only surviving drive-in restaurant from the "happy days" of the 1960s, and has continued in Rogers for 59 years. The menu has essentially stayed the same through the years except for the prices. "When we opened, our hamburgers were 25 cents," said Patsy. "The prices have increased some since then."

The drive-in has stayed the same inside and out except the distinctive canopy was added in the mid-1960s. The metal cover collapsed with the heavy snow in the winter of 1989 but was restored. Miraculously, owner J.B. Head had just walked out from under the canopy when it collapsed.

The distinctive Susie Q neon sign out front was added in 1963 when Mildred finally saved enough money for it. The historic sign was a familiar landmark in Rogers for 56 years until last January, when a pickup destroyed it during the ice storm. The drivers left the scene and are unknown. Patsy Simmons still wants to replace the sign but so far, the cost has been prohibitive.

Not only has the Susie Q stayed the same since 1960, but the ownership has stayed in the Head family. Mildred Head handed over the reins to her son, J.B. Head, in 1972, but continued to work in the restaurant until 1999, when she was 87 years old. J.B. Head sold the business to his childhood friend and cousin, Patsy Head Simmons, in 2004, and she still owns it today. For the past few years, the still-popular spot has been leased and managed by Sheila "Goldie" Williams.