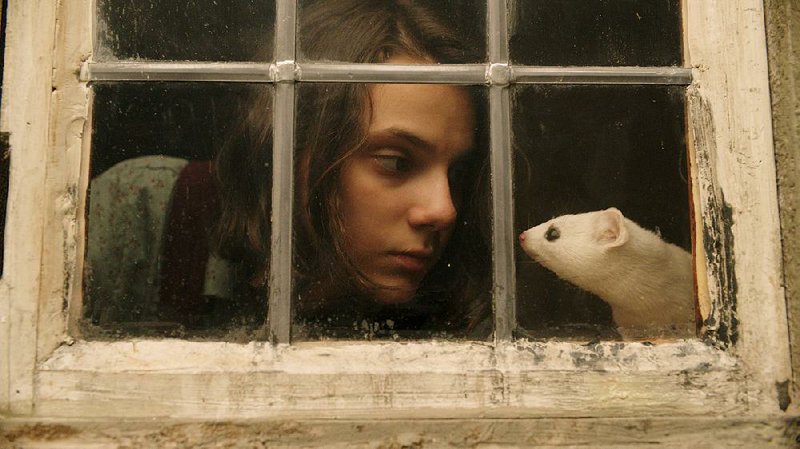 Dafne Keen stars as Lyra in HBO’s His Dark Materials. The series is based on Philip Pullman’s science fantasy story for young people.

In 2007, The Golden Compass, the first volume of His Dark Materials, Philip Pullman's alternate-world, cosmological science fantasy for young people, became a movie. It had a starry cast that included Nicole Kidman and Daniel Craig, with a Kate Bush song over the closing credits, and wasn't very good at all. It underperformed at the U.S. box office, and plans to adapt the remainder of the trilogy evaporated.

Now HBO, in partnership with the BBC, has begun a new, three-season, 24-hour translation of all three books. It debuted Monday on HBO. (Only the first four episodes have been made available for review; they cover the first half of The Golden Compass.) Even with modern blockbuster-on-a-budget technology, one should not expect this to happen again soon, if ever, and fans of the books will be glad to know that care has been taken to get it right this time. From what I've seen so far, nothing of consequence has been left out. Changes should alarm only nitpickers, and additions, mostly in the spirit of the text, are to the good — fleshing out characters and character relationships, converting description to action, and making a workable motion picture out of words on a page.

As kids' books go, His Dark Materials is grown-up stuff, an adventure story influenced by free-thinking poet-printmaker William Blake, with a title and epigraph borrowed from Milton's Paradise Lost, whose lapsarian argument it inverts. (It has also often been seen as a riposte to C.S. Lewis' Christological Chronicles of Narnia, which Pullman, an atheist, has characterized as misogynist, racist, anti-life and fat-shaming, among other things.) But it has talking animals, too, and balloon rides.

As is not uncommon in fantasy fiction, it is set in a world like — yet unlike — our own. Visually, the TV series recalls post-war Great Britain; technologically, it is newer and older: There are metal zeppelins and mechanical "spy flies," but I don't remember anyone talking on a telephone. Quantum theory is in there somewhere, and mathematics that imply other worlds and dimensions. ("Dark materials" has a nice incidental resonance with "dark matter.") Politically, it is dominated by the Magesterium, a militarized church-state with fascist tastes in building and branding. (Series writer Jack Thorne adds what I took to be a timely — if vague — reference to pedophile priests.)

Lyra, our heroine (the excellent Dafne Keen), is a brave and clever child, "half-wild, half-civilized," living as a kind of ward of a college at her world's version of Oxford University — a "scholastic sanctuary." Unlike her near-peer Harry Potter, who entered the world two years after The Golden Compass was published, her prophesied specialness is unknown to her and to most every other character here. She is not burdened by messianic celebrity but only trying to find her missing best friend and work out why so many of the adults in her life are so screwy.

These include Lord Azriel (James McAvoy), whom she regards as her uncle, mostly away exploring and experimenting in "the north." (Lyra would like him to take her along when he goes.) And there is Mrs. Couler (Ruth Wilson), a beautiful woman of means — also familiar with the Arctic — who takes Lyra under her wing with plans to convert her from half to wholly civilized and groom her for power. Both McAvoy (Professor X in a mess of X-Men movies) and Wilson (Idris Elba's psycho gal pal in Luther) are well cast as obsessive sorts driving the plot from different ends toward a reckoning.

There are witches and polar bear warriors, a clockwork gizmo that will answer any question if you have the rare ability to read it, something called Dust that comes from space, and what looks like a city in the sky beyond the aurora borealis. Pullman's most vivid invention is the daemon, a sort of externalized soul in animal form that accompanies every human. It's as if, say, Jiminy Cricket were not distinct from Pinocchio but an actual part of him. Children's daemons are changeable — Lyra's, whose name is Pan (Kit Connor) and serves as helpmate, playmate and skeptical interlocuter, is most often an ermine — but settle into permanent form with the onset of adulthood, reflecting their person's basic nature. (Puberty is central to the mythology.)

Many elements of His Dark Materials were already familiar when Pullman wrote it, and more so since: the orphan child with a special destiny, adult treachery, threatening institutions, science gone too far, the journey into unknown lands with helpful new friends also in need of help. Lyra's fellow travelers include the Gyptians, water-borne nomads; Lee Scoresby, a Texan "aeronaut," played by Lin-Manuel Miranda as a kind of American cousin to his lamplighter in Mary Poppins Returns; and Iorek Byrnison (Joe Tandberg), a polar bear down on his luck.

Though there are some large set pieces coming later in the season, the special effects budget early on has primarily been spent on making the CGI animals look good, and they do. More generally, the series has not been made to thrill you with marvels. Wide-eyed delight is not what its makers are after. The story takes place in an only slightly altered version of our ordinary world, and everything in the production is tailored to serve that story — the story is not, as can often be the case in big-budget fantasy films, cooked up just to serve the production.

And it is often quite terrifying. There are passages in the book that are difficult to read even for a relatively thick-skinned grown-up, horrible not in the gory or spooky sense, but as violations of wholeness and identity. You don't need to live in Lyra's world to know what it's like to be intimately connected to an animal, to feel the physical ache when a pet disappears even for an hour. For the reader and viewer, this arrangement only amplifies the tension: You worry for Lyra for Pan's sake and for Pan for Lyra's sake.

I didn't say this would be easy. Or fun. But it's worth your while.