Westerman’s proposals would give judges discretion in juvenile cases by Frank E. Lockwood | March 29, 2019 at 2:04 a.m. 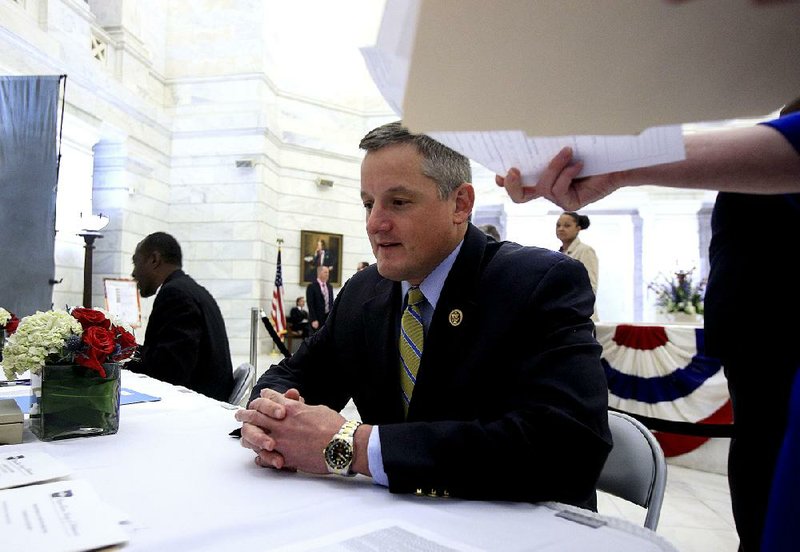 WASHINGTON -- Victims of child sex abuse and trafficking who kill or wound their abusers would be eligible for reduced sentences under legislation sponsored by U.S. Rep. Bruce Westerman, R-Ark.

If approved, federal judges would have broad discretion when sentencing juveniles who commit this kind of crime.

The bill, one of three introduced by Westerman on Thursday, is called "Sara's Law," after Sara Kruzan, a California sex trafficking victim who killed her abuser when she was 16 years old.

The lawmaker from Hot Springs said he likes the bill's chances.

"I can't imagine anybody not having empathy for a juvenile who's been trafficked or sexually abused and [is] ... resorting to violence to get out of the situation," he said.

The bill would allow judges to consider "the effect of trauma" the juvenile experienced at the hands of the abuser, if the abuse occurred within a year of violent crime. In such cases, judges would be authorized to "suspend any portion of an imposed sentence."

However, "Sara's Law," if approved, would cover only federal offenses; Kruzan's conviction was in state court.

George Gilbert Howard began sexually abusing Kruzan when she was 11 and forced her into prostitution by the time she was 13, her attorneys said. Three years later, Kruzan shot Howard, 36, in a Riverside, Calif., motel room, walking away with $1,500 and the keys to his Jaguar, according to news reports.

Sentenced to life in prison without the possibility of parole, her sentence was reduced by then-Gov. Arnold Schwarzenegger. In 2013 -- 19 years after the killing -- she was finally paroled.

James Dold, who leads a Washington child advocacy group called Human Rights for Kids, said the system has failed Kruzan and others like her.

"Children who commit crimes against people who have previously sex trafficked or sexually abused them do not deserve prison time. We need to treat them differently in the criminal justice system," he said. "Congressman Westerman's bill really, in our judgment, is a very modest attempt to try to bring some fairness and justice to these sort of situations."

The legislation would only cover crimes against predators committed by their juvenile victims.

Along with "Sara's Law," Westerman also introduced two other bills allowing shorter sentences for minors who are tried as adults.

One would eliminate mandatory life sentences without the possibility of parole for juvenile offenders. This type of penalty, when applied to minors, amounts to "cruel and unusual punishment," the U.S. Supreme Court declared in 2012. Minors sentenced to life in prison would be entitled to a parole hearing after serving 20 years if the bill becomes law.

The other would allow judges to impose sentences on minors that are 35 percent below existing mandatory minimums. When leveling punishments, judges could factor in the offender's age and his prospects for rehabilitation.

The goal of the legislation, Westerman said, is "to focus on rehabilitation" and to give youthful offenders "some hope that if they change their life and do better, that they're not going to be locked away forever in prison."

Westerman, a father of four, is a former Fountain Lake School Board president.

Over the years, he's seen "good kids, if you will, make bad decisions," he said. "We were all that age at one time."

"When kids are growing and maturing, and their bodies are changing and different things are happening around them, a lot of times they're more subject to peer pressure and the environments they're living in," he said.

"There's even research that shows that their brains aren't fully developed," he said. "That should be taken into account during the sentencing."

Dold supports all three bills, predicting they will have a "profound impact on the way that children are treated in the justice system."

Josh Rovner of the Sentencing Project said punishments for minors are unusually severe in the United States.

Judges need leeway when they decide a child's fate, he said.

"Teenagers are more prone to rash decision-making, very bad at weighing the consequences of their actions. They are impulsive. And those are all things that are going to lead to bad decisions, especially in times of stress or in the presence of their peers," he said. "Fortunately, adolescence is not a permanent condition. People change. People mature."

It's important for the law and the courts to reflect that reality, he added.