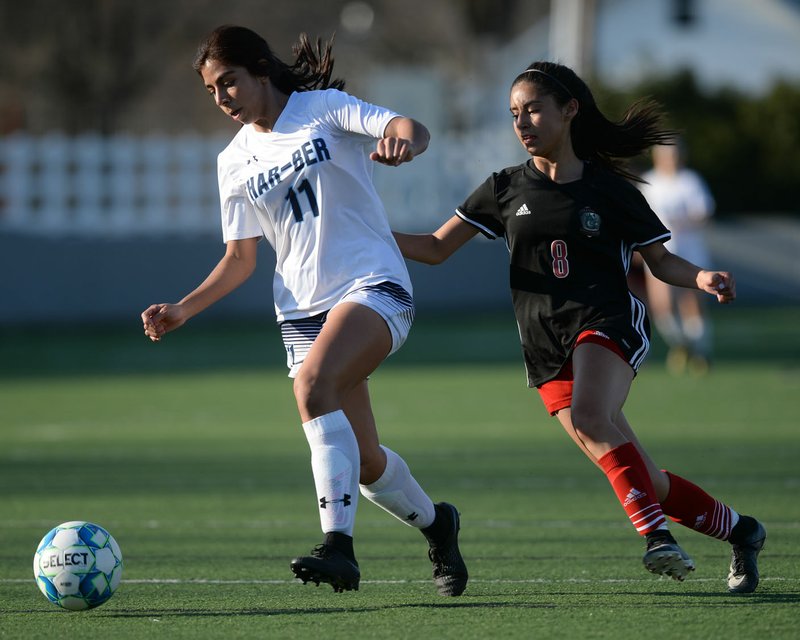 SPRINGDALE -- In her first match back from injury in close to a month, Springdale Har-Ber freshman Natalia Bartlett did not seem to miss a beat.

Bartlett scored the only goal of the match as Har-Ber claimed a 1-0 win against crosstown rival Springdale High at Jarrell Williams Bulldog Stadium on Tuesday in 6A-West girls soccer action.

Har-Ber's win broke a three-match losing streak for the Wildcats (5-5-1, 1-3) and earned them their first conference win of the season.

"That's what we needed," Har-Ber coach Fabrizio Campagnola said. "We talked about it. We said there were some things we needed to improve, but we needed a big confidence boost. That's what this game will do for us."

After a scoreless first half, Har-Ber broke the stalemate nine minutes into the second half after the Wildcats pressed down the field and scored off a pass from junior forward Faith Snow.

Snow's cross took a bounce over the head of Springdale goalkeeper Noelia Romero who seemed to lose the ball in the late afternoon sun. A scrum in the keeper's box ensued with both Har-Ber and Springdale players vying for the ball before Bartlett knocked it in for the goal.

"It was a good cross," Campagnola said. "The cross is what got the keeper in trouble, and Bartlett was good in going for it and following it and working to finish it."

The goal was the lone mishap for a Springdale team that had been on the defensive for most of the night.

"It just turned into a scramble in there," Springdale coach D.J. Beeler said.

For the Lady Bulldogs (4-6-1, 0-3), the loss marks the third straight game they have failed to score in regulation. The team had two opportunities with a minute left in the game to spark some offense off a corner and free kick but overshot the ball both times.

"It's a matter of taking our chances," Beeler said. "(Springdale) did a good job tonight of limiting our chances, but we have produced some quality opportunities in our games. It's just a matter of having the right attitude in front of goal, the composure. Taking the chances when they're there has been a big coaching point for us."

Campagnola was frustrated that his team gave up those chances so late in the game, especially up only one goal, but thinks his team did well keeping the ball on Springdale's side of the field for a majority of the night.

Grace Stahr had a hat trick to help the Lady Mounties cruise past the Lady Wolverines in 6A-West Conference action.

Rogers (10-1, 3-0 6A-West) led 5-0 at halftime. Haley Arrick and Jourdan Badely had a goal and an assist each for the Lady Mounties to support Stahr's three goals.

Bentonville endured a scoreless first half, then picked up the offense for a 6A-West Conference win over Heritage at the Tiger Athletic Complex.

Abby Stolt had two goals for the Lady Tigers (10-1, 3-0), while Angelina Diaz accounted for the other score.

Tom Shultz broke a scoreless tie with a free kick just before halftime, and West went on to post a 6A-West Conference victory over Rogers at Wolverine Stadium.

Shultz drilled his free kick past the line of defenders and into the right side of the goal from 23 yards out with 1:20 before halftime. Blake McDoulett gave the Wolverines (6-2, 2-1) an insurance goal with a short kick after an assist from Austin Pettigrew with 30:44 remaining.

Blake Williamson made that lead stand with a solid effort at goalkeeper as West shut out Rogers (5-2-2, 2-1).

Four different Bentonville players accounted for goals as the Tigers knocked off Heritage at the Tiger Athletic Complex.

Rodrigo Mouron, Johnny Merlos, Bryce Mills scored their goals in the first half and gave Bentonville (5-2, 2-1) a 3-0 halftime cushion. Elliott Nimrod provided the Tigers with their only second-half goal.

Jose Vega scored both goals for the Bulldogs (4-2, 3-0) in a close match against crosstown rival Har-Ber.