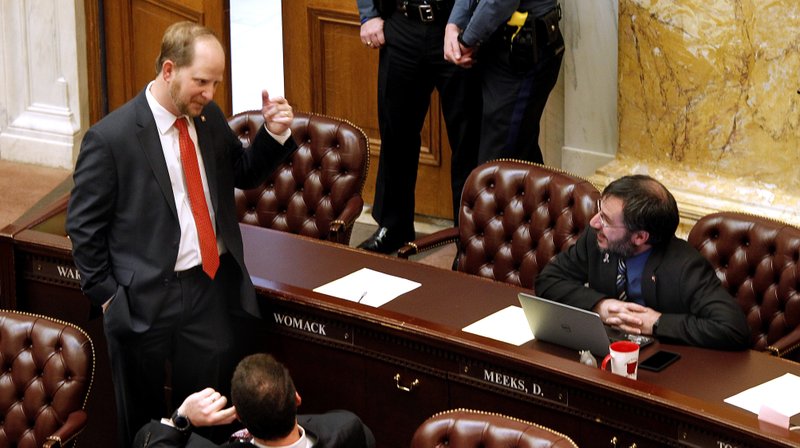 With four votes to spare, the Arkansas Senate on Tuesday approved a bill that would use funds raised from new tobacco and existing medical-marijuana taxes to help the University of Arkansas for Medical Sciences in its attempt to get a National Cancer Institute designation.

The 35-member Senate voted 22-10 for House Bill 1565 by Rep. Andy Davis, R-Little Rock. The bill goes back to the House to consider a Senate-approved amendment.

On Monday, a parliamentary move used by opponents caused the bill to fall one vote short of approval.

The Senate on Monday initially voted 20-12 on the bill before Sen. Terry Rice, R-Waldron, and several others called for "sounding the ballot." Under that procedure, a Senate official calls the name of each senator recorded as voting for the bill. Votes are struck when a senator's name is called and the senator is not seated. The affirmative votes of Linda Chesterfield, D-Little Rock, Joyce Elliott, D-Little Rock, and Mark Johnson, R-Little Rock, were struck Monday.

Sen. Jonathan Dismang, R-Searcy, told senators Tuesday that he tried "the best I can" to go around the Senate and clear up his colleagues' concerns.

"If you supported the bill, go ahead and take your seat," he said.

But Rice told senators that he opposes the bill because it increases the minimum age from 18 to 21 by 2021 for the purchase of tobacco products.

There are young people in rural Arkansas who are beyond high school and working, including people who work for him, and may get married and have children and smoke, said Rice, who is a furniture store owner.

In addition to picking up the yeas of Elliott, Chesterfield and Johnson on Tuesday, the bill picked up two others because Sen. Breanne Davis, R-Russellville, voted for it on Tuesday, after voting against it on Monday, and Sen. Jane English, R-North Little Rock, said yes on Tuesday, after not voting the day before, according to the General Assembly's website.

HB1565 would dedicate receipts from the sales and special-privilege taxes on medical marijuana, which is soon to go on sale; increase the required business markup on cigarettes from 7.5 percent to 9.5 percent; raise the tax on packs of about 32 cigarette papers by 50 cents to 75 cents; and eliminate the current border zone tax rate for cigarettes.

The bill would become effective Sept. 1, the state Department of Finance and Administration said in a legislative-impact statement.

Dismang said in an interview that the bill if passed is projected to raise $5.4 million in state tax revenue for the UAMS National Cancer Institute-designation in fiscal 2020, which starts July 1. That estimate rises to $8.5 million in fiscal 2021, which starts July 1, 2020. The revenue would come from the increased tax on cigarette papers and the receipts on sales and special-privilege taxes on medical marijuana, he said.

During negotiations on the Revenue Stabilization Act, the governor and legislative leaders will determine how that can provide additional funds, so UAMS would get $10.5 million in state funds each fiscal year, he said.

The Revenue Stabilization Act distributes general revenue to state-supported programs such as the public schools, Medicaid program, colleges and universities and prisons each fiscal year.

Dismang said the increase in the minimum age for buying tobacco products also is projected to reduce revenue by about $5 million a year.

UAMS' Winthrop P. Rockefeller Cancer Institute hopes to obtain National Cancer Institute recognition. There's been a bipartisan push in the General Assembly to pursue the recognition, and lawmakers established a trust fund under Act 181 to hold private and public dollars raised for the effort. The goal is to raise about $30 million.

UAMS spokesman Leslie Taylor said in an email to the Arkansas Democrat-Gazette that "we estimate [obtaining the designation] will take 4-7 years."

There are 70 National Cancer Institute-designated facilities in 36 states, but none in Arkansas.

Public-health advocates say that having such a facility in Arkansas would expand cancer-treatment options, but several advocacy organizations have opposed the bill because they see several provisions as handouts to the tobacco industry.

Arkansas is one of 18 states that don't prevent cities and counties from further regulating tobacco, according to the U.S. Centers for Disease Control. Davis has said that disparate regulations on the local and state levels make it more difficult for state tobacco regulators to enforce the law.

Public-health advocacy groups also oppose phasing in the higher tobacco-buying age, instead backing a bill that passed the House committee that would raise the age immediately. Both bills would allow military members who are at least 18 to purchase tobacco. 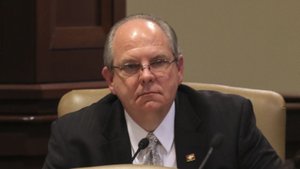 Photo by Staton Breidenthal
Sen. Terry Rice, R-Waldron, is shown in this photo.