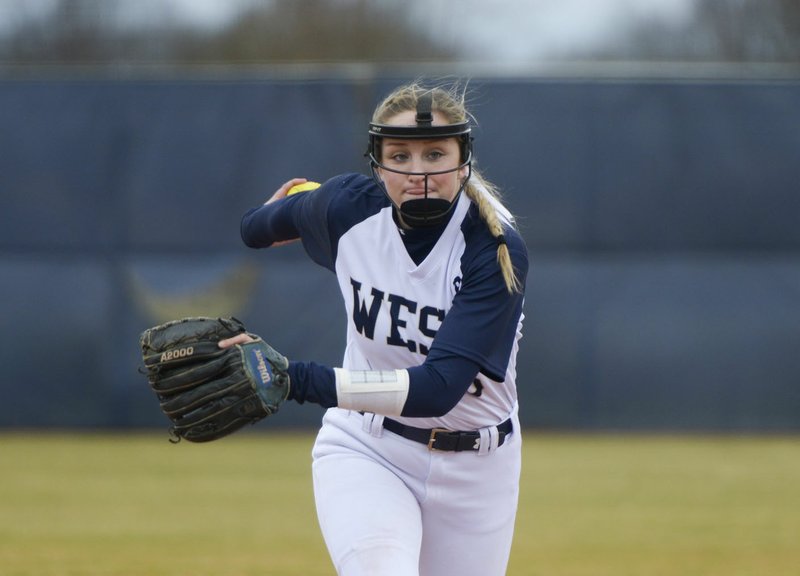 CENTERTON -- Elise Sokolsky's first varsity game in the circle for Bentonville West was a special one Thursday afternoon.

The sophomore pitched three perfect innings, striking out all nine batters she faced in the Lady Wolverines' 16-0 6A-West Conference win over Springdale High in three innings.

West (3-0, 2-0 6A-West) gave Sokolsky plenty of support and got going quickly in the bottom of the first. Hallie Wacaser led off with a double, stole third and scored when the catcher's throw went into left field. That was only the beginning of the parade around the base paths as the Lady Wolverines finished with 12 hits.

"She pitched in a JV game the other night against Gravette and did well," Cantrell said. "She did what she needed to do today. She works hard and she's around the plate a lot.

"She's going to be able to pitch for us some this year. She's a true pitch kid. Her riseball is a true riseball and her screwball is a true screwball. She's developing her change-up a little bit. She's getting better."

Springdale (0-4, 0-2) didn't manage to put a ball in play against Sokolsky and was also hurt by five errors.

Cassie Gonzalez went 4-for-4 with a triple, drove in a run and also scored one to help the Lady Mounties earn the run-rule win.

Madison Heinle picked up the win, allowing a run on two hits over five innings. She struck out six, but walked five.

The Wildcats built a 6-0 lead and held off Heritage late for a home win Thursday.

Heritage out-hit Har-Ber 10-8, but the Wildcats belted three extra-base hits including home runs from Sophie Wood and Emily Bartlett. Wood was 2-for-2 with a double 2 RBIs, and Bartlett was 2-for-4 with 4 RBIs for Har-Ber. Jacey Ewert also had two hits for the Wildcats.

Kayla Paulo homered for Heritage and drove in three runs.