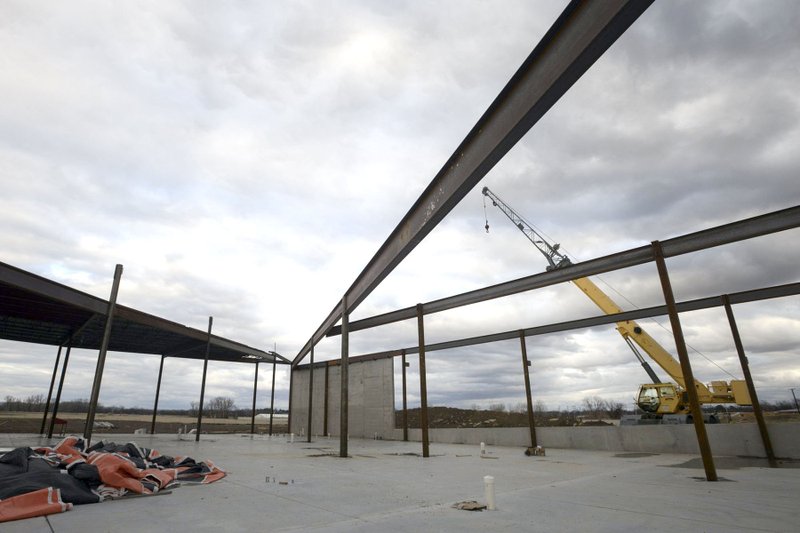 The site of the new Marshals Museum, December 27, 2018 in Fort Smith. The building is expected to be completed by fall of 2019.

FORT SMITH -- Voters rejected Tuesday a proposal to levy a temporary 1 percent sales tax to pay for completion of the U.S. Marshals Service's national museum on the banks of the Arkansas River.

Complete but unofficial results were:

"We are disappointed that tonight's outcome was not favorable," museum Foundation President Jim Dunn said in a statement. "We are heartened by the many expressions of support by even those who opposed our effort. We have overcome many obstacles to get this far and we ask that all the citizens of Fort Smith unite and help complete the museum as soon as possible."

Fort Smith attorney Joey McCutchen, a leader among opponents of the tax, also said Fort Smith residents should unite to help complete the museum. McCutchen said the people of Fort Smith and Arkansas have done their part to donate money for the museum and that it is up to the museum to do its part and raise the money through donations.

"I think the people of Fort Smith have sent a loud and clear message that we need to focus on our priorities," he said. "We support the museum, but we do not support it being paid for with public funds."

Museum officials have said they would continue raising the $15.3 million needed to design and build the exhibit experience in the museum along with the startup cost and working capital. The museum raised about $35 million in donations and in-kind donations over nearly 10 years.

Construction is underway on the $19.1 million, 50,000-square-foot museum building.

City directors set Tuesday's election by ordinance in December when museum officials requested a nonrenewable 1 percent sales tax for nine months that would raise $15.5 million to $16 million. They asked for the tax because a large donation last summer that was a matching challenge had fallen through.

The tax met resistance from the start. Director George Catsavis voted against the museum tax ordinances, saying he did not like the idea of a special election. He argued that typically low turnout in special elections favored those who support the issue. The election should have been held during the Nov. 6 general election when more voters go to the polls, he said.

Catsavis and other opponents said Fort Smith residents are overtaxed. He said residents bear a high sales tax rate of 9.75 percent and have endured three consecutive years of sewer rate increases to pay for system improvements mandated by a federal consent decree.

Many opponents of the tax said it is unfair to use public tax money for a private museum, one that some speculated would have trouble keeping its doors open without a future infusion of public tax money.

Included in the directors' ordinances was the formation of a public facilities board, which Arkansas law allows municipalities to establish. It would have purchased and owned the facility and grounds and leased them to U.S. Marshals Museum Inc., which would operate the museum. The public facilities board's ownership of the property was necessary so public tax money could be used by a private nonprofit corporation for a public purpose.

Opponents said the public facilities board was an end run around the Arkansas Constitution that allowed Fort Smith directors to attempt to provide public tax money for the private museum. They questioned what the responsibility of the board would be if the museum closed, who would serve on the board, and how board members would be chosen.

The museum will feature five galleries for the 1,000 items in its collection: Defining Marshals; Campfire Stories Under the Stars; Frontier Marshals; A Changing Nation; and Modern Marshals. It will also include the Samuel M. Sicard Hall of Honor for marshals killed in the line of duty, and a National Learning Center.

Museum officials and supporters said the tax money would have been well spent. They estimate the museum will draw more than 125,000 visitors to Fort Smith annually and will have an annual $13 million to $22 million impact on the local economy.