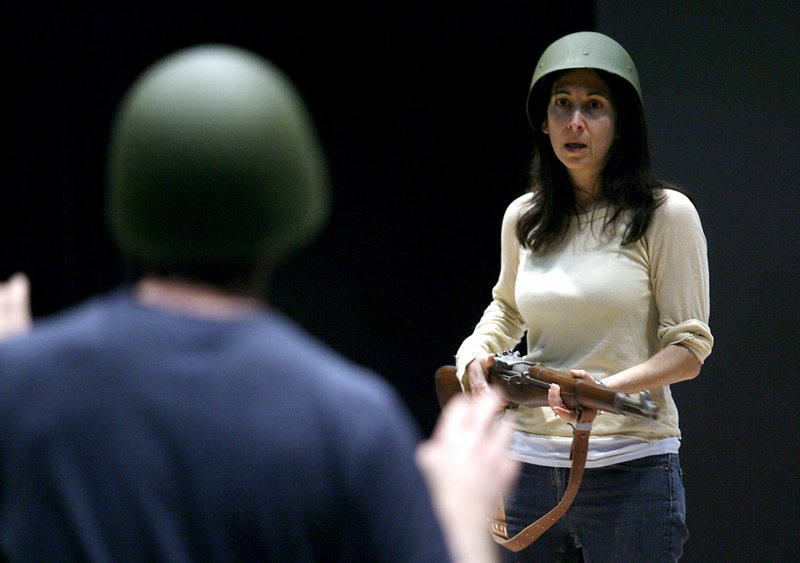 File Photo/JASON IVESTER Amy Herzberg rehearses a scene in the original production of “My Father’s War,” written by Robert Ford and first produced by T2 in 2008. The play, based on a true story about Herzberg’s father, Art Herzberg, returns to the T2 stage in 2020.

TheatreSquared has been making season programming announcements for 14 years now, and there's always been an air of excitement around that event. But there's no doubt that this year is particularly momentous. That's because the award-winning regional theater's 14th season will be the first in its new, state-of-the-art, 50,000-square-foot facility.

In its current incarnation in the Walton Arts Center's Nadine Baum Studios, T2 has only one theater space and no dedicated rehearsal space. The addition of a second theater space -- the Spring Theatre is the new building's black box space, in addition to the mainstage West Theatre -- and a 1,700-square-foot rehearsal hall means that T2 can add a seventh show to its season offerings.

"The progress on our building construction is proceeding on schedule," added T2 artistic director Robert Ford. "There are literally hundreds of workers there on any given day. The 'Our Next Stage' campaign is [at] over 80 percent of its goal and entering its crucial last phase. Everything is pointing in the right direction for professional theater in Northwest Arkansas."

T2 will kick off the "Grand Opening Season" with "Shakespeare in Love" by Tom Stoppard, Lee Hall and Marc Norman. The 2014 play premiered at the Noel Coward Theatre in London's West End, where the Daily Telegraph called it "funny, often genuinely moving" and a play that "generates a glow you could warm your hands by."

"The first show in the new facility had a high bar to clear," noted Ford to the crowd gathered to hear the announcement. "We wanted it to be something beautifully written that would make our audience share a sense of joy; we wanted it to give us an opportunity to invite back some of our favorite artistic professionals; and we wanted it to be an open love letter to theater -- because in a way, that's what this building is."

Next up is "Native Gardens" by acclaimed playwright Karen Zacarías. The incisive social commentary-comedy has been a hit at venues like the Guthrie Theater in Minneapolis and Arena Stage in Washington, D.C.

"We know everyone here loves a comedy," said Miller. "This one is brand new and up-to-the-minute and brings back playwright Karen Zacarías, who joined us for our New Play Festival just a few years ago. Putting a new spin on the old adage, 'Good fences make good neighbors,' 'Native Gardens' introduces us to Tania, a very pregnant Ph.D. candidate, and Pablo, her rising star attorney husband, who move next door to Virginia and Frank, a deep-rooted couple with an impeccably trimmed backyard. But when a questionable fence line puts Frank's prize-worthy garden in jeopardy, what starts as a friendly question soon escalates hilariously into an all-out border dispute."

T2 will celebrate the holidays by re-imagining an old favorite: Charles Dickens' "A Christmas Carol."

"For the holiday season, we wanted to show the many folks who will be discovering us for the first time next year how TheatreSquared can put a defining spin on a true classic," said Ford. "A Christmas Carol brings together audiences of all ages in regions across the world each year during the holidays -- and that's a pretty neat trick, considering it's the darkly painted world of Charles Dickens' Victorian London, populated with ghosts who wake up an unlikable protagonist and threaten his soul. But the joy and redemption of this timeless story -- and the challenge of doing it fresh, uniquely, and really, really well -- brought us back to create a brand new stage version, directed and adapted by the wonderful Amy Herzberg."

The new year will bring "The Royale" by Marco Ramirez, a New York Times' Critic's Pick when it was performed at the Lincoln Center in 2016.

"Told in a boxing ring over six rounds, 'The Royale' is an electrifying adrenaline rush that shows us the human cost of making history," said Miller. "From playwright Marco Ramirez, the showrunner of 'Orange Is the New Black' and 'Daredevil,' comes a story inspired by the real-world boxer Jack Johnson who -- as an African-American man at the height of the Jim Crow era -- became the Heavyweight Champion of the World."

In the mid-spring slot, T2 hopes to repeat the success of this year's "Every Brilliant Thing" with another one-person show.

"How many of you remember Texas governor Ann Richards?" asked Ford of the assembled T2 patrons. "She's hard to forget, right? For the next production in our Grand Opening Season, we are thrilled to feature the play that the New York Times called 'Funny, fiery, salty and brash'. 'Ann' is the inspiring and hilarious story of that captivating woman, who was even bigger than the state from which she hailed. This acclaimed, one-woman tour-de-force will bring the charismatic and storied former governor of Texas into TheatreSquared's most intimate new space."

For the penultimate show of the 2019-20 season, T2 is bringing back a fan favorite that is very personal to two of the theater's co-founders -- Ford, who wrote "My Father's War," and Associate Artistic Director Amy Herzberg, whose father's war experiences serve as the basis for the story.

"A decade ago, TheatreSquared staged a world premiere that remains one of the most commented-on crowd favorites of anything we've ever mounted," said Miller. "Now, we are bringing it back in a limited engagement to commemorate the 75th anniversary of the end of World War II: 'My Father's War' by Robert Ford.

"As she dons her father's old combat helmet, Amy is plunged into a world at war," Miller continued. "This T2 original is the funny, harrowing and deeply moving story of a Jewish kid from Chicago's North Side who landed at Normandy on D-Day and fought through to the Battle of the Bulge. As Pvt. Herzberg survives one near-death experience after another through luck, chutzpah, and sheer comic timing, his daughter chases down the one story that still haunts him."

The final selection of the season promises to be a show stopper: T2 will produce the winner of five Tony Awards, "Matilda: the Musical," based on the novel by Roald Dahl.

"'Matilda: The Musical' is the story of an extraordinary girl who, armed with a vivid imagination and a sharp mind, dares to take a stand and change her own destiny," said Ford. "It's a wonderful, mischievous, smartly written new musical that has thrilled adults just as much as it's inspired kids. It's the perfect show to close out the grand opening season.

"It's going to be an exciting season."

“The Royale” — Told in a boxing ring over six rounds,” The Royale” is inspired by the real-world boxer Jack Johnson who — as a black man at the height of the Jim Crow era – became the Heavyweight Champion of the World. Performances Jan. 22-Feb. 16, 2020.

“Ann” — “Funny, fiery, salty & brash,” (The New York Times), “Ann” is the inspiring and hilarious story of a captivating woman who was even bigger than the state from which she hailed. Performances Feb. 19-March 22, 2020.

“My Father’s War” — Donning her father’s old helmet, Amy Herzberg once again tells Bob Ford’s funny, harrowing, and deeply moving story of Art Herzberg, a Jewish kid from Chicago’s North Side who landed at Normandy on D-Day and fought through to the Battle of the Bulge. Performances March 25-April 25, 2020.

“Matilda: The Musical” — TheatreSquared reimagines for Northwest Arkansas the story of an extraordinary girl who, armed with a vivid imagination and a sharp mind, dares to take a stand and change her own destiny. Performances May 20-June 21, 2020.