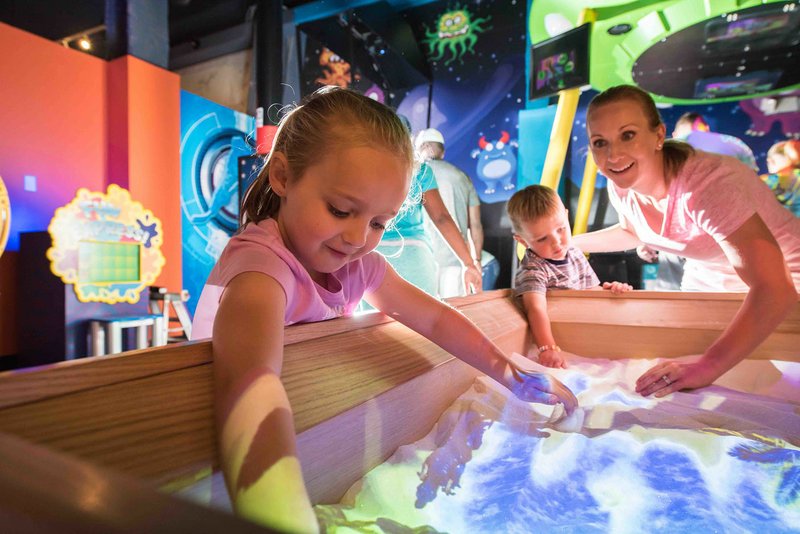 Photo courtesy Janine Vaccarello Among the exhibits planned for WonderWorks in Branson is the Interactive Sandbox, where each hand motion and sand movement will produce unique environments for guests to explore.

It's no surprise when a company spokeswoman sings the praises of a new Branson attraction.

"We always say 'fun for all ages' because it's true," says Orlando-based Janine Vaccarello, chief operating officer for WonderWorks. "Whether you are 5 or 50, you can have a great time. There really is something for everyone.

WHERE — The old Baldknobbers Theater at 2835 W. 76 Country Blvd. in Branson

"This is not a place just for kids: It's interactive, educational, fun -- everyone will smile!"

But Vaccarello isn't just whistling in the wind. WonderWorks, scheduled to open in mid-August in the old Baldknobbers Theater at 2835 W. 76 Country Blvd., has been successful in five other cities -- Orlando and Panama City Beach, Fla.; Pigeon Forge, Tenn.; Myrtle Beach, S.C.; and Syracuse, N.Y. And the reviews online agree with her assessment:

"It feels like a mix between a science museum and an arcade with lots of different activities to do," a German visitor to the Orlando location wrote.

"My husband and I took our 14-, 13-, and 10-year-old," a mom wrote about the Pigeon Forge location. "We thought it would be a little over an hour worth of things to do, but ... we didn't even do everything after three hours."

"You could spend an hour or a day and still be enjoying when you left," wrote another Pigeon Forge visitor. "We had a family group of nine ranging in ages 13 to 65, and every one of us had a blast."

Founded in 1998 in Orlando, WonderWorks is the brainchild of John Morgan, who worked at Disney through college, Vaccarello says. "He has a very creative imagination, and attractions blood runs through his veins!"

Morgan envisioned "an indoor amusement park for the mind" that is uniquely recognizable outdoors. WonderWorks is in fact known for its iconic look -- a grandiose house flipped upside-down.

"The unique facade is part of WonderWorks' background story," Vaccarello says in a press release. "According to legend, it was once a top-secret laboratory that was lifted and flipped on its roof by an experiment gone awry."

Inside, state-of-the-art experiences in Branson will include:

The Interactive Sandbox -- Explorers will experience land, sea and safari in this futuristic exhibit. Using light projections, each hand motion and sand movement will produce unique environments for guests to explore.

Illusion Art Gallery -- A plethora of optical illusion pieces make a space between exhibits for guests to stop and challenge their minds and vision.

Xtreme 360 Bikes -- The movement of the bike depends on how fast and hard guests pedal. Participants will try to generate enough power to make complete 360-degree revolution.

Professor Wonder's Adventure -- An interactive way to learn how WonderWorks came to be, this spatial augmented reality adventure will give guests a 3-D experience that transforms the area they stand in into an "unreal" experience.

Bubble Room -- Create bubbles the size of basketballs, blow bubbles through a bubble sheet, or make a bubble big enough for a creator to fit inside.

"WonderWorks will offer guests over 100 hands-on activities focused on science, technology, engineering, art and mathematics," Vaccarello promises, "with interactive exhibits about natural disasters, light, sound, space, imagination and more. The attraction will also feature a physical challenge area and, exclusive to the Branson's location, an interactive military experience and an exhibit that gives a nod to Branson's rich history."

Vaccarello says the goal at WonderWorks is to bring both tourists and locals back to the attraction many times.

"We have many repeat visitors each year at all our locations," she says. "We've looked at Branson for a long time; it's a market similar to Pigeon Forge; and we found the location we liked -- so it was a fit!" 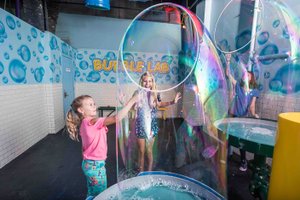 Photo courtesy Janine Vaccarello Among the exhibits planned for WonderWorks in Branson is a Bubble Room, where kids of all ages can create bubbles the size of basketballs, blow bubbles through a bubble sheet, or make a bubble big enough for them to fit inside.