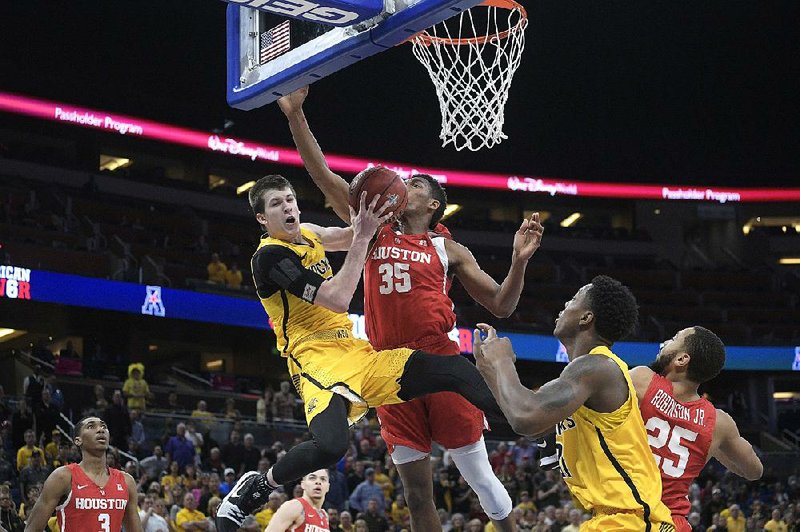 In this Saturday, March 10, 2018, file photo, Wichita State guard Austin Reaves (12) is fouled by Houston forward Fabian White Jr. (35) while going up for a shot during the second half of an NCAA college basketball game in the semifinals at the American Athletic Conference tournament in Orlando, Fla. Reaves is preparing for a big role with Oklahoma after transferring from Wichita State and sitting out last season.

NORMAN, Okla. -- Folks who haven't seen Oklahoma guard Austin Reaves in a while might do a double take when they see him again.

The transfer from Wichita State, who played his high school basketball at Cedar Ridge, has put on 20 pounds of muscle in the past year while sitting out because of transfer rules and has learned quickly how to take advantage of his 200-pound frame.

As a result, the 6-5 junior has proven to be much more than a sharpshooter during summer workouts.

"He's been able to get in the lane a lot and finish tough plays," Oklahoma guard Jamal Bieniemy said.

But he still has the range.

"He shoots that thing," freshman guard De'Vion Harmon said. "He's gotten me a few times in practice. And I've got him a few times. His range is unbelievable.

"I'd give him the rock every time. And that's going to rack up a lot of assists for me and a lot of buckets for him."

Reaves played two years at Wichita State before transferring. As a freshman, he averaged 4.1 points per game on a Wichita State team that went 31-5 and reached the NCAA Tournament. In 2017-18, he started 11 games and averaged 8.1 ppg while shooting 42.5% on three-pointers for another NCAA Tournament-qualifying team.

The Oklahoma coaching staff helped him stay focused from the bench last season by allowing him to offer his teammates tips as he watched the action.

"I just tried to be engaged at all times," he said. "Sitting out was a struggle."

Reaves got an up-close look last season at Bieniemy's emergence. Bieniemy averaged 4.9 ppg last season as a freshman and led the team with 3.5 assists and 1.4 steals per contest. He stepped in as a starter at midseason and helped the Sooners reach the second round of the NCAA Tournament.

"He was very, very consistent from when he got here," Reaves said "He did the things he had to do. Stayed on the court and really built a lot of trust through the coaching staff."

"We're actually going to be a fairly young group," Reaves said. "Just be a leader, be vocal and try to help the young guys go through the things that I've already been through."

Harmon thinks the guard trio of himself, Reaves and Bieniemy could be deadly. Harmon is a highly touted recruit from Denton, Texas, who has been a part of the USA Basketball program.

"When we're on the same team, it's really there," Harmon said. "I think it looks better than people thought it would be, just for the first month we've been here. But we're really clicking, so I can only imagine what happens when September, October, November hits and so forth. When me, him and Jamal are together -- I'll bet on us every single night. And that's how it's supposed to be."

Reaves starred at Cedar Ridge High School, leading the Timberwolves to the Class 3A state basketball championship in 2016 as a senior. He scored 43 points, grabbed 6 rebounds and handed out 5 assists in a 75-60 victory over Charleston in the title game.

He crushed the Arkansas record for most points scored in a single state tournament with 173, breaking Joe Brasel's mark of 146 set in 1960. He also set a finals record for most free throws made in a title game with 21.