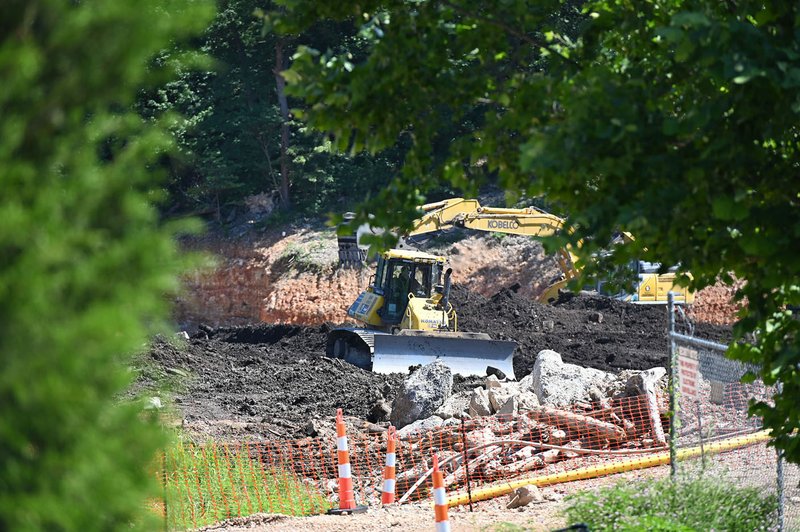 NWA Democrat-Gazette/SPENCER TIREY Workers use a bulldozer Thursday to smooth and fill the former stump dump after extinguishing a fire, while cleaning up in Bella Vista. Work is being done to stabilize the site now that the fire is out, according to the Property Owners Association.

BENTONVILLE -- The Bella Vista Property Owner's Association and its insurance carrier have filed lawsuits against each other related to the recently extinguished stump dump fire on Trafalgar Road.

The association operated the dump on leased land from December 2003 to Dec. 31, 2016, when it was covered with soil, according to Tom Judson, the association's chief operating officer. No one monitored the site the last few years it was open, but staff members would remove trash when possible, he said.

The property is owned by Brown's Tree Care.

City firefighters discovered the fire at the dump July 29. It was extinguished earlier this month.

The association took the job of extinguishing the fire and cleaning the site from the Arkansas Department of Environmental Quality on May 3. The department named the association as a possible responsible party.

Two lawsuits were filed against the association in connection with the fire. One was dismissed. The existing suit, filed by families living near the dump, claims hazardous smoke from the site hurt their families. The suit names the association and three other entities.

Attorneys for the association Monday added its insurance carrier -- Philadelphia Indemnity Insurance Carrier -- as a third party in the lawsuit. The case is filed in Benton County Circuit Court.

The firm told the association in June it rejected the requests.

The association claims in its lawsuit one of the amenities the association historically offered its residents and members was a stump dump. The suit claims the dump is an original feature of Bella Vista and was used when the developer, Cooper Communities, needed a place for itself and home builders to dispose of trees, according to court documents.

The lawsuit claims the association has spent at least $3.8 million to extinguish the fire and ensure it will not reignite and to stabilize the site.

The insurance firm filed a lawsuit Tuesday in U.S. District Court in Fayetteville against the association. The lawsuit says the association's policy has never covered the dump because the association hasn't listed it for coverage as it has other amenities.

The association never told the firm it operated the stump dump or any similar site, according to court documents. The lawsuit claims the company wouldn't have insured the site even if it had been aware of the operation.

The firm wants the court to rescind the company's commercial general liability with the association.

The association wants a judge to find the insurance carrier is in breach of its obligation to defend the association and pay damages up to the limits of its primary and excess liability coverage.