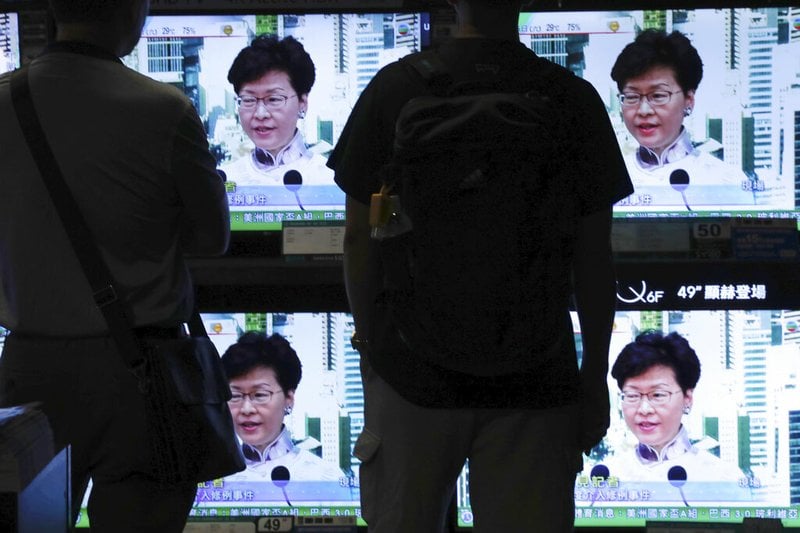 Residents watch a broadcast of Chief Executive Carrie Lam speaking at a press conference held in Hong Kong on Saturday, June 15, 2019. Lam said she will suspend a proposed extradition bill indefinitely in response to widespread public unhappiness over the measure, which would enable authorities to send some suspects to stand trial in mainland courts. (AP Photo/Vincent Yu)

Yet the ground has shifted considerably since she began her civil service career in the 1980s. On Saturday, she appeared to be fighting for her political life as she sought to explain her decision to push through unpopular legislation that would make it easier to extradite suspects to communist-ruled mainland China, which took control of the territory in a 1997 handover.

A key reason for Lam's vulnerability is that she was not directly elected by the territory's people, but rather ushered into office in 2017 by the vote of a 1,194-member committee dominated by pro-Beijing elites, despite being far less popular than her main rival.

She now finds herself caught between a public that never truly backed her, and leaders in Beijing who want her to push through unpopular measures seen to be eroding Western-style economic, social and cultural freedoms that Beijing promised to respect for at least 50 years after it took back control from Britain.

Lam, 62, has a reputation as an efficient and pragmatic administrator. But she was unpopular with Hong Kongers even before she took office because she was seen as a proxy for Beijing who was out of touch with ordinary people.

She said Saturday that she was shelving the extradition bill to avoid further social turmoil following a protest march that drew hundreds of thousands of people on June 9 and violent clashes on Wednesday where police used tear gas, rubber bullets and other tactics, angering the public further.

Lam's insistence that she had the full backing of China's central government in taking her decision likely rang as tone-deaf given skepticism over the communist leadership's motives, especially after a deadly crackdown on student-led pro-democracy demonstrations in Beijing's Tiananmen Square three decades ago.

"They understand, they have confidence in my judgment and they support me," Lam told reporters, while also saying the legislation was still needed.

Hours later, Bonny Leung, a leader with a pro-democracy alliance, accused Lam of "ignorance and arrogance." She and other activists urged Hong Kong citizens to turn out en-masse for a march Sunday to demand the full withdrawal of the extradition bill, an apology for the aggressive police tactics and Lam's resignation as chief executive.

Few anticipated that Lam would become embroiled in such friction when she took over from her predecessor Leung Chun-ying, a highly polarizing former policeman who stepped down as chief executive in 2017, citing family reasons.

Lam may eventually, after a face-saving interval, also end up stepping aside, analysts said. That would allow time for Beijing to decide upon a successor that the leadership considers both competent and politically reliable.

"They may not fire her immediately, but her chances for a second term are totally gone now and they may find a reason to let her go without losing much face because now she is hated by everybody in Hong Kong and her administration has become quite ungovernable," said Willy Lam, a veteran political observer.

Carrie Lam is Hong Kong's first female leader and its fourth since Britain ended its colonial rule in 1997. While the Chinese government in Beijing has condemned foreign criticism of the protests over the extradition bill as meddling in the country's internal affairs, they've largely remained aloof from the controversy in Hong Kong, preferring to let Lam take the heat or even make her a scapegoat, according to some analysts.

China's ambassador to Britain told the BBC the push to fast-track the extradition bill was entirely Lam's idea.

Unlike many in the top ranks of Hong Kong's leadership, Lam comes from a humble background. She grew up in the downtown Wanchai district, the fourth of five children. She attended a Catholic girls school, the University of Hong Kong and later Cambridge University.

She is married to a mathematician and has two sons. They are British citizens, but Lam is not.

Much of the unhappiness with Lam and her administration predates her appointment as chief executive. Protests in 2014 over rules Beijing imposed for choosing members of the election committee that helps select the chief executive paralyzed parts of the city for weeks.

The protests, dubbed the Umbrella Movement, highlighted Hong Kong aspirations for greater, rather than less democracy.

On taking office, Lam pledged to focus on issues such as housing, education and health care. In pushing for the extradition bill, she ignited public frustrations over increasing control by Beijing.

In speaking to reporters on Saturday, Lam insisted she only wants what's good for Hong Kong.

"We have not done a good enough job to convince the people of Hong Kong," she said.

"Give us another chance."