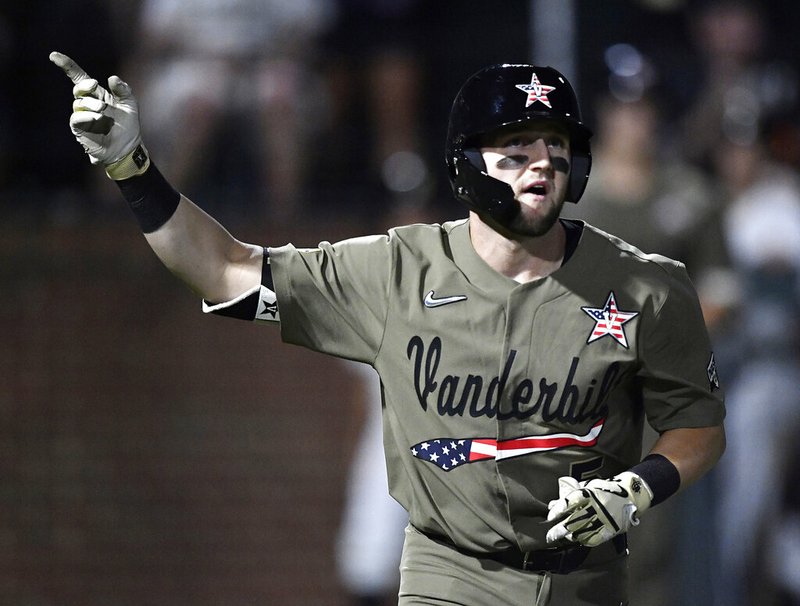 In this June 2, 2019, file photo, Vanderbilt's Philip Clarke (5) points to the sky after hitting a home run in the bottom of the fourth inning against Indiana State during an NCAA college baseball regional game in Nashville, Tenn. The College World Series has an even stronger Southeastern Conference flavor than usual. "The background on my phone is TD Ameritrade Park," said Vanderbilt catcher Philip Clarke, referring to the site of the College World Series. "That's definitely an expectation, to go there every year." (George Walker IV/The Tennessean via AP, File)

The College World Series has an even stronger Southeastern Conference flavor than usual.

This marks the 11th time in the last 12 seasons that the CWS includes multiple SEC teams. At least one SEC team has reached the CWS' best-of-3 championship round 10 of the last 11 years.

This CWS field this year also is notable for what's missing. For the first time since 1996, no West Coast schools reached Omaha.

UCLA was the NCAA Tournament's No. 1 overall seed but lost a best-of-3 super regional to Michigan.

"We lost one series all season -- and it was this weekend," UCLA coach John Savage said after losing to Michigan in the decisive third game. "It's a tough one to swallow."

By sending four teams to the College World Series, the SEC has tied a record. The SEC also had four CWS representatives in 1997, 2004 and 2015. The Atlantic Coast Conference sent four teams to Omaha in 2006.

Tennessee coach Tony Vitello, a former Arkansas assistant, says the depth of the lineups made the SEC particularly strong this year.

"I think the arms are always going to be there, but the hitting from top to bottom was pretty dang good, with lots of lineups with the 7, 8 and 9 hitters doing damage," Vitello said.

Perhaps it's no coincidence that three of the SEC's best lineups reached the College World Series.

Vanderbilt, Arkansas and Mississippi State are the SEC's top three teams in batting average, slugging percentage, on-base percentage and runs scored. Vanderbilt leads the league in each of those categories as well as homers.

Vanderbilt is the No. 2 national seed and tied an SEC record this year by having 13 players drafted. Vanderbilt first baseman and SEC player of the year JJ Bleday went fourth overall to the Miami Marlins.

"The background on my phone is TD Ameritrade Park," said Vanderbilt catcher Philip Clarke, referring to the site of the College World Series. "That's definitely an expectation, to go there every year."

Arkansas and Mississippi State bounced back from disappointing finishes to their 2018 CWS appearances.

Mississippi State was a game away from meeting Arkansas in last year's championship round before losing two straight times to Oregon State. Mississippi State is the No. 6 national seed this year under new coach Chris Lemonis.

"We definitely wanted to get back," Mississippi State pitcher and Milwaukee Brewers first-round pick Ethan Small said. "I think the experience of losing in Omaha last year helped us do that."

Arkansas was an out away from winning its first national championship last year when a ninth-inning foul pop fell between three of its fielders. Given new life, Oregon State rallied to win 5-3 and beat Arkansas again the following night to earn the title.

The Razorbacks return to Omaha as the No. 5 national seed.

"It left a little bit of a bitter taste in our mouth, but there's also guys on the team that have contributed to get us back to Omaha who weren't even part of that moment," Arkansas outfielder Heston Kjerstad said. "They didn't know what it felt like. It was kind of a little different for the guys who have been there and the guys who (haven't), but at the end of the day, we're just focusing on this season."

Auburn's presence in Omaha is more surprising. The Tigers upset No. 3 national seed Georgia Tech in a regional and No. 14 seed North Carolina in a super regional to clinch their first CWS appearance since 1997.