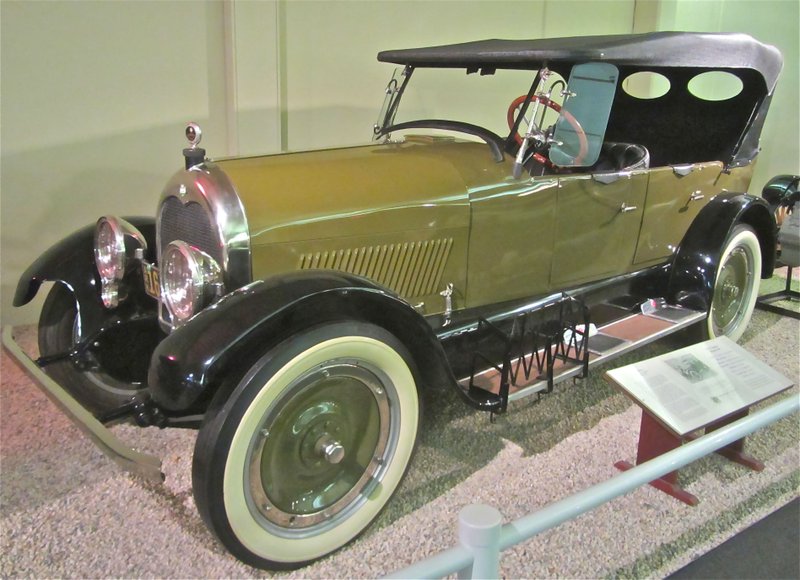 A rare 1923 Climber Phaeton Model 6-50, manufactured in Little Rock, is displayed at the Museum of Automobiles on Petit Jean Mountain. It was priced at $2,250, then a princely sum. - Photo by Special to the Democrat-Gazette / MARCIA SCHNEDLER

A Jewish cemetery in the Delta, a Catholic shrine in the Ozarks and the Museum of Automobiles on Petit Jean Mountain are among 15 Arkansas properties that were recently added to the National Register of Historic Places.

"These properties are all important to Arkansas' past and represent the value of historic preservation to our state," said Stacy Hurst, Department of Arkansas Heritage director and state historic preservation officer. "I encourage all towns and cities to work together to save the places of the past that matter to the people who live in your community."

Temple Beth El Cemetery, established in 1875, is the second cemetery of Helena's Jewish community, according to the draft nomination.

Helena and West Helena merged in the fall of 2005 to form Helena-West Helena.

At the end of 2016, the 2.5-acre cemetery contained 390 gravestones and memorials. The earliest known burial was in 1862, and the burials continue to the present day, with only a small proportion of modern-day burials, according to the cemetery's draft nomination.

In the Boston Mountain section of the Ozarks, Catholics had little access to church services in the mid-20th century.

After an effort by some women to organize a parish, the Diocese of Little Rock formed Our Lady of the Ozarks, and parishioners established a small mission near Winslow in Crawford County, according to the draft nomination.

"In 1944, the parish began building the current native stone church and established a Marian statue on the front lawn," according to the nomination. "Over a two-year period, the parish added more statues to the grounds and finished the original plans for the church."

"Since its inception as the first Marian shrine in Arkansas, Our Lady of the Ozarks has remained a prominent shrine and has served as an annual destination for Catholic pilgrims in Arkansas," according to the nomination.

The Museum of Automobiles is a 1964 building designed by noted Arkansas architects Dietrich Neyland and Robert Millett, according to the draft nomination.

The building was constructed by Winthrop Rockefeller, who was Arkansas' governor from 1967 to 1971.

"The beginning of the automobile collection that would be housed in the Museum of Automobiles began in 1961 when Rockefeller purchased a collection of automobiles from the James Melton Autorama in Hypoluxo, Fla., a museum that Melton had opened in 1953," according to the nomination.

The Petit Jean building, which is owned by the Arkansas Department of Parks and Tourism, is about 9 miles southwest of Morrilton and 3 miles southeast of Winrock Farms.

Other Arkansas properties that made the National Register are:

• Arkansas Territorial Restoration Historic District in Little Rock, a district significant as an early historic preservation project in the state.

• Empire Life Insurance Co. of America Building in Little Rock, a notable example of the international style designed by Wittenberg, Delony and Davidson, and built in 1959-1960.

• Norwood House in Russellville, a 1917 house with Prairie and Craftsman-style characteristics.

• Former U.S. post office and federal courthouse in Jonesboro, a 1913 building designed in the Renaissance style.

• Yadkin Church near Ravenden Springs in Randolph County, a one-room church built around 1894 that is one of the last vestiges of the Yadkin community.

• Muxen Building near Winslow, a 1940s building built to serve as a craft school for residents.

• Ellis Building in Fayetteville, a circa-1923 automobile sales and service building.