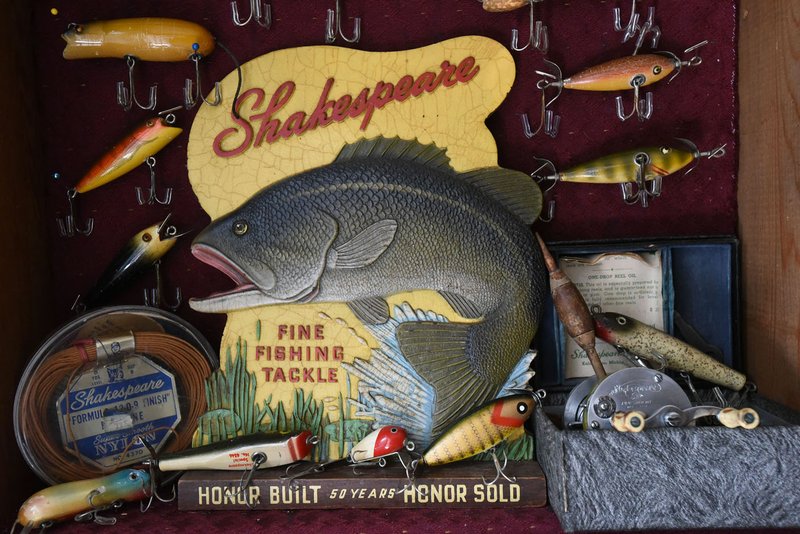 NWA Democrat-Gazette/FLIP PUTTHOFF Hundreds of lures and an array of fishing memorabilia are part of a collection that Tom Diepenbrock of Bella Vista has put together over the years.

If fish could jump a country mile, they might make a flying leap out of Lake Windsor and land in Tom Diepenbrock's rec room. They'd be missiles with gills drawn by his vast collection of fishing lures.

There on the walls, surrounding the red felt of a billiards table, are hundreds and hundreds of lures all attractively displayed in wood-framed glass cases at the angler's lakeside home in Bella Vista. All are in new condition.

Diepenbrock has created meticulous arrangements of fishing lures gathered during years of serious collecting. The cases protect them, but the glass doors can be opened so Diepenbrock can take out a particular lure to show visitors.

The collection is like a museum of fishing. One can be mesmerized by the lures from companies that have been household names among anglers for decades. Heddon, South Bend, Fred Arbogast and other giants of the fishing world are well represented in the displays.

Diepenbrock has arranged them by the manufacturer, the lures' often quirky names and some by color. One case contains nothing but Jitterbugs from the Fred Arbogast company. Most anglers of a certain age have caught hard-fighting bass on one or a dozen Jitterbugs.

Another display showcases only black Heddon top-water lures with a herring-bone pattern on their sides.

It's more than a hobby. Acquiring lures is serious stuff, sometimes expensive, for Diepenbrock. He travels hundreds of miles to attend tackle shows looking for that pot of gold with hooks. He's been a member of the National Fishing Lure Collectors Club for years.

His oldest lure was made in 1889. Age isn't the main factor that makes a lure collectible.

"Condition and color is everything," Diepenbrock said. "If you have the original box and the paperwork that goes with it, it practically doubles the value."

During a show-and-tell tour of his collection, the fisherman pointed out that a lot of the older lures are red and white.

On the water, Diepenbrock likes to catch bass on top-water lures -- new ones, not old collectibles. A splashing surface strike from Mr. Big red-lines the heartbeat of any angler. Top-water lures are well represented in his rec room.

Take the display of Jitterbugs. They're top-water lures that wiggle and splash on the surface, until a big bass nails it. Wing-like attachments of steel or plastic on the front of the lure make those movements when retrieved.

Diepenbrock picked out a couple with plastic wings. "These with the plastic were all made during World War II because steel was in top demand for the war effort," Diepenbrock noted.

A collector can pay a dollar for a lure or $100,000, he said. When he's inspecting one to buy or trade, Diepenbrock checks for paint that is intact. It's no problem if the lure is a tad dirty. Over the years he's perfected techniques to clean dirty lures.

What he can't fix are "worm burns." These occur when a plastic worm comes in contact with a hard-body lure. Over time, it eats away at the paint and can cause fissures in the lure's body.

They're still good for fishing. Some anglers buy them, repaint them and compete with them in "old lure" fishing tournaments held around the country.

There's a can of Texaco outboard motor oil on a shelf that's vintage 1950s. It's never been opened and is full of the original oil. A sign in mint condition advertising Shakespeare fishing tackle is a piece Diepenbrock particularly likes.

Touring the collection is more than looking at lures. It's a walk through history, history that's being preserved.

The club is a nonprofit international organization founded in 1976. The objectives of the National Fishing Lure Collectors Club are to foster awareness of fishing tackle collecting as a hobby and to assist members in the location, identification and trading of vintage fishing-related equipment.