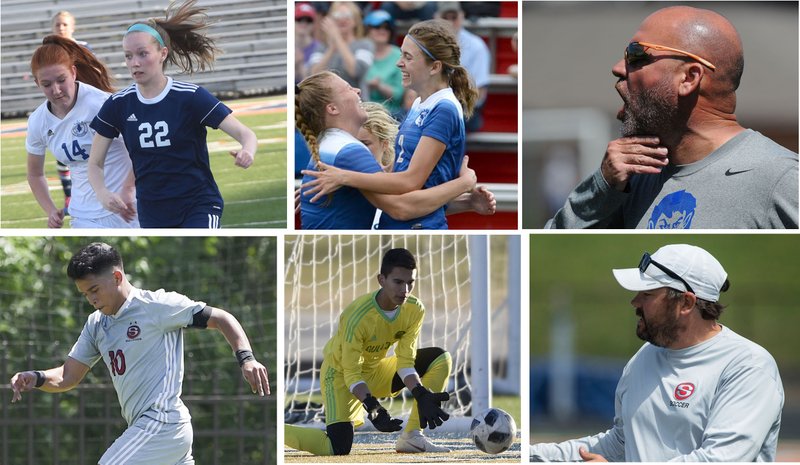 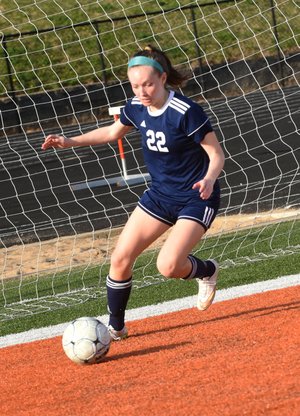 NWA Democrat-Gazette/FLIP PUTTHOFF Rogers Heritage's Pam Seiler has been named the All-NWADG Girls' Soccer Player of the Year. She finished with a 6A-West Conference high 19 goals to go with seven assists.

THE SCOOP Seiler battled through an injury-plagued basketball season and still earned all-conference honors despite dealing with an ankle injury and then a broken nose. ... As a sophomore, Seiler posted a 6A-West Conference-leading 19 goals to go with seven assists to help the Lady War Eagles advance to the state quarterfinals. ... She was named 6A-West Conference Player of the Year this season, after putting up even better stats as a junior with 22 goals and 11 assists.

QUOTABLE "I was proud of how I played and got over the hump of all my injuries and not thinking about them. I felt like I gained confidence this year. I wasn't as hesitant playing. I knew what I wanted to do and how to do it.

I was so proud of my team and how we did this year. We did two things that we as a group had never done before this year. We had never beaten Rogers, and we had never won at state. We were so happy. I'm looking forward to my last year of high school soccer. I know college will be a lot different. I have to take it all in and appreciate it."

THE SCOOP Pratt guided the Lady Goblins to their seventh state soccer title and third in four seasons. ... Harrison finished the season 25-3-1, outscoring four state tournament opponents by a combined total of 17-3 and finished off an impressive run, which saw the team win 24 out of its last 25 matches and 13 in a row to close the season. ... The lone blemish was a 1-1 tie against Ozark, Mo., in the Springfield (Mo.) Kickapoo tournament. That's also 13 total state soccer titles for Pratt (seven coaching girls and six coaching boys).

DID YOU KNOW Pratt coached soccer at the collegiate level before coming to Harrison. He served as the head women's coach at Arkansas-Little Rock for five years and the assistant for two years from 1994-2000. He has also served as Harrison's athletic director for the past five years, as well as boys' and girls' soccer coach for 19 years.

QUOTABLE "We had 10 seniors in basketball; that's our 1-3 start. They were still competing in the state basketball tournament.

"We got everybody and got them jelled together pretty quickly. That senior class has been together probably the last eight to 10 years. I think they're just good people. We had some quality leadership. The mix of the seniors we had and the underclassmen, they liked to win and embraced the competition inside of practice." 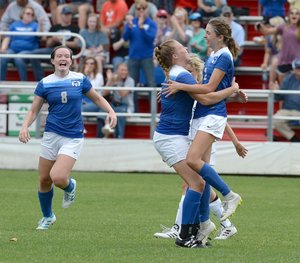 NWA Democrat-Gazette/ANDY SHUPE Harrison's Olivia Pall (right) has been named the All-NWADG Girls Soccer Newcomer of the Year. The freshman scored a goal in the Lady Goblins' state finals win and finished with 18 goals on the season.

THE SCOOP Pall provided a spark off the bench most of the season for the Class 4A state champions. ... She finished with 18 goals and seven assists, including a goal in the state finals. ... The freshman started playing soccer at age 3 in Kansas, but she and her family moved to Harrison eight years ago and she began playing for a team her father coached.

DID YOU KNOW Pall was also part of the Lady Goblins' Class 4A state championship cross country team. She was the fourth Lady Goblin to cross the finish line but finished ninth overall with a time of 22 minutes, 10 seconds.

QUOTABLE "The beginning of the season started off kinda bumpy for me. The seniors just helped me get confidence in myself. I feel like our connection as a team helped. Coach (Chris) Pratt was really helpful to let me know what I needed to do. If I made a mistake, he helped me through it.

"I didn't know where I fit in at the beginning of the year, but it all worked out. It was a little rough because I really wanted to play, but he (Pratt) told me I needed to be the sub to come in with fresh legs and turn things around for us. It showed me I don't have to start to make a difference playing."

Finished with 75 saves and six shutouts for the 6A-West co-champions.

Scored 24 goals to go with 16 assists for the Lady Goblins.

Scored 25 goals along with five assists for the Class 4A champions.

Scored 12 goals to go with eight assists and spent time on defense.

Scored 14 goals and added five assists for the Lady Wildcats.

Scored 10 goals along with 11 assists to help team get back to the state tournament.

Anchored defense for 6A-West co-champs title and earned Defensive Player of the Year.

Key part of defense to help Rogers claim a share of the 6A-West title.

Scored 12 goals to go with 13 assists for the Lady Purple'Dogs.

ALL NWADG TRACK AND FIELD ATHLETES

PLAYER OF THE YEAR 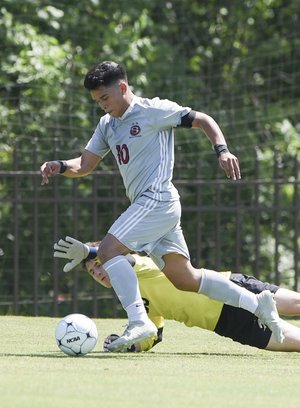 NWA Democrat-Gazette/CHARLIE KAIJO Jose Vega of Springdale has been named the All-NWADG Boys' Soccer Player of the Year. Vega had 24 goals and six assists for the Class 6A state champions.

DID YOU KNOW Vega played four years of varsity soccer at Springdale and participated in the state championship game as a freshman against Bentonville.

QUOTABLE "We came in very focused to get the job done after losing to (Fort Smith) Northside in the semifinals last year. It feels amazing to win a state championship my senior year, especially after getting so close when I was a freshman."

COACH OF THE YEAR 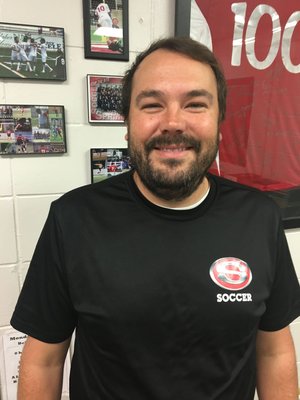 NWA Arkansas Democrat-Gazette/RICK FIRES DJ Beeler of Springdale has been named the ALL-NWADG Boys' Soccer Coach of the Year. Beeler led Springdale to the Class 6A state championship with an 18-2 record.

DID YOU KNOW Springdale has finished no less than the top two in conference play in 10 of the 12 years Beeler has coached the Bulldogs.

QUOTABLE "I was really looking forward to this season just because of the personalities on the team. Coaching high school kids, there are other things sometimes you have to deal with. But I knew the focus with these kids was going to be on soccer and getting better every day. They were such a joy to coach." 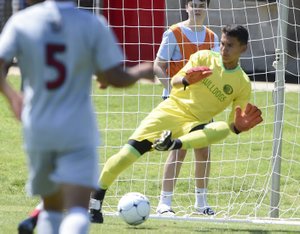 NWA Arkansas Democrat-Gazette/CHARLIE KAIJO Abram Cordero has been named the ALL-NWADG's Boys' Soccer Newcomer of the Year. Cordero posted nine shutouts for the state champions in Class 6A.

DID YOU KNOW Cordero hopes to travel to Europe to watch premier league soccer matches.

QUOTABLE "I was so excited, and it was a relief when I was named (starting) goalie. I just gave it my all. I wanted to do well for my family, friends and supporters."

Former keeper had nine goals and five assists as a first-year forward.

Had 26 goals and two assists for a team that finished 15-6 on the season.

The senior captain had 15 goals and two assists for a team that finished 15-6 on the season.

Had 16 goals and 15 assists. Signed with Crowder College (Mo.) after scoring 44 career goals.

Scored nine goals for the Wolverines.

Had seven goals and two assists for Class 6A state champions.

MVP of Class 6A state title game. Had six goals and five assists on the season.

Had four goals and 15 assists for Bentonville, which finished 14-7 overall and third in the 6A-West.

Scored five goals and added 13 assists for the Tigers.

Had 40 goals and two assists for a team that finished 12-10 overall.

Had 11 goals and one assist for Class 6A state champions.