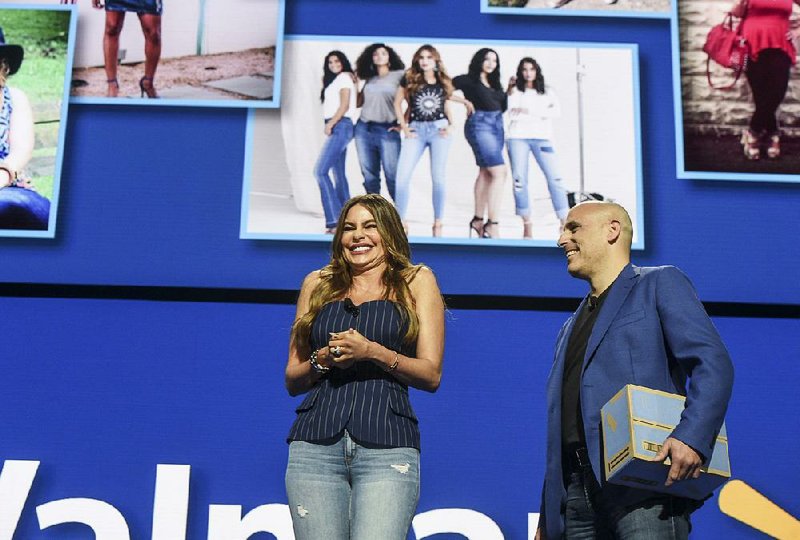 Sofia Vergara of the Modern Family television series and Marc Lore, chief executive of Walmart e-commerce in the United States, show off the line of jeans Vergara designed for the company at the Walmart celebration Friday in Bud Walton Arena in Fayetteville. - Photo by Charlie Kaijo

FAYETTEVILLE -- Walmart Inc. employees and shareholders crowded into Bud Walton Arena on Friday for the retailer's annual star-studded celebration. The event capped a week of tours, concerts and other activities designed to introduce visiting employees to Northwest Arkansas and Walmart's Bentonville headquarters.

Actress Jennifer Garner served as emcee for the three-hour event, and Modern Family star Sofia Vergara dropped by to chat on stage with Marc Lore, chief executive of Walmart e-commerce in the U.S., about the line of jeans she designed for the company. Musical guests Lady Antebellum, Neon Trees, Bebe Rexha and Maren Morris entertained, with the band One Republic closing out the festivities.

Walmart founder Sam Walton's surviving children -- Rob, Jim and Alice Walton -- were present, along with other members of the extended Walton clan. One son, John, died in the crash of his home-built ultralight aircraft in 2005.

Between performances, Walmart executives highlighted the company's growth and achievements over the past year, especially in e-commerce and technological innovations. Each stressed the part that employees play, both individually and as a whole, in the retailer's success.

Walmart board of directors Chairman Greg Penner, after describing Walmart's "incredible" year of strong sales, rapid growth in new areas and rising stock prices, said the Friday celebration "is always a reminder of just how right Sam [Walton] was about the most important part of our company. It's why I chose to wear this pin today. It's the one that Sam always wore out in the stores: 'Our people make the difference.'"

Greg Foran, president and chief executive officer of Walmart's U.S. division, thanked the division employees for "a fantastic performance" in the past year, particularly with the success of online grocery pickup and implementing new technology in stores.

Citing the relationships he has seen in his travels around the country between Walmart and the communities in which its employees live and work, Foran said he believes success in most areas of life depends on personal relationships.

"I think personal relationships are the basis for how we, as Walmart, or anyone else for that matter, can uphold many of the values which bring out the best of humanity," Foran said. "If each of us builds those kinds of relationships reasonably well, we can help make a meaningful difference in people's lives, and in the neighborhoods where they live and work."

Themes of change, innovation and problem solving came up frequently, fitting for a week in which Walmart said it will start offering in-home grocery delivery, directly to refrigerators, later this year. Doug McMillon, the retailer's president and chief executive officer, elaborated on the new service that was announced Thursday.

All deliveries will be made by employees who have been with the company at least one year, McMillon said. Customers, who set the date and time of the delivery, will be notified when employees arrive at their homes. Customers also can watch live online as the delivery is made or can watch a recording of it later.

McMillon also described another new service, one that will be available starting in July to members of Sam's Club, Walmart's members-only warehouse division. A mobile app called Sam's Garage, which grew out of McMillon's frustration with a wait last year to buy a new tire at a Bentonville Sam's Club, will greatly speed up the tire-buying experience, he said.

Referring to how Sam Walton built the company by solving problems for customers, McMillon said its future depends on that same strategy.

"Walmart creates opportunity," he said. "We don't shy away from problems. They actually are opportunities. We embrace them. We grow and change. We adapt. 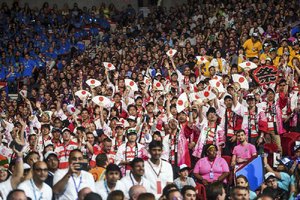 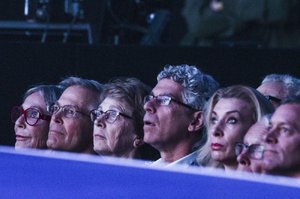 Photo by Charlie Kaijo
Members of the Walton family take in Friday’s celebration at Bud Walton Arena in Fayetteville. 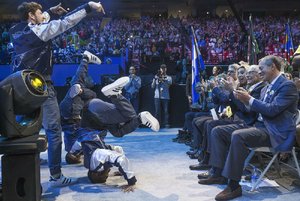 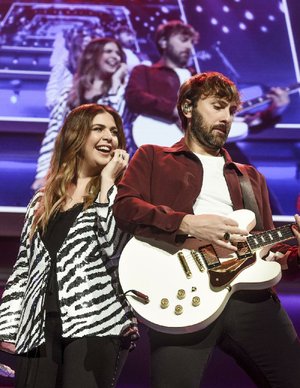 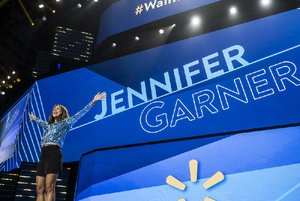