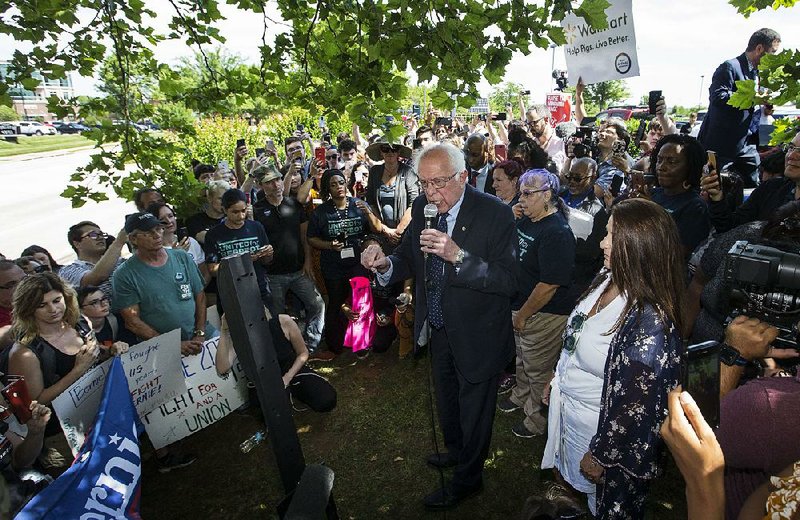 ROGERS -- Presidential candidate U.S. Sen. Bernie Sanders made a brief appearance at Walmart Inc.'s annual shareholders business meeting Wednesday. Speaking for less than three minutes, he presented a proposal asking the company to give hourly workers a seat on the board.

Sanders, an independent from Vermont who is running as a Democrat, was invited to the meeting by Walmart employee Carolyn Davis, who submitted the proposal. Only shareholders or their proxies and invited guests of the company were admitted to the meeting, which was held at the John Q. Hammons Center in Rogers.

Presenters were allotted three minutes in which to speak. Sanders, who spoke second, finished in two minutes and 51 seconds.

As a senator and a presidential hopeful, Sanders has challenged large companies like Walmart and Amazon.com to raise their minimum wages to $15 an hour. He took the opportunity Wednesday to do so again, saying the Bentonville retailer is owned by the nation's richest family, collectively worth about $175 billion, yet pays its employees what he termed "starvation wages" that force them to turn to government aid to survive.

"The American people are sick and tired of subsidizing the greed of some of the largest and most profitable corporations in this country," Sanders said. "They are also outraged by the grotesque level of income and wealth inequality in America, as demonstrated by the CEO of Walmart making a thousand times more than the average Walmart employee."

McMillon's pay ratio was down 9.4% from the previous fiscal year, however, and median employee pay rose 14.5%. Walmart raised its base pay to $11 an hour in February 2018.

Sanders' remarks drew a smattering of applause from a small group of people accompanying him and left the meeting room after the presentation. A cheer could be heard from about 120 supporters waiting outside on the sidewalk of the Embassy Suites.

"I want to thank all of you who are here today and all the Walmart workers across the country who are fighting for justice," Sanders said to the crowd.

The country faces an economic crisis of millions of people "working paycheck to paycheck while the wealthiest three families in the country have more wealth than half of America," Sanders said. The Walton family can afford to pay people more than $11 an hour, he said, a rate of pay that leaves workers dependent on taxpayer assistance for basic needs, he said.

Sanders visited with supporters for about 10 minutes and took questions from reporters.

United for Respect started out as an affiliation of Walmart employees but later expanded into a workers-rights group with employees from other companies. Besides wages, the group advocates for better hours for workers and more notice of changes to them.

The Republican Party of Arkansas issued a statement after Sanders' appearance. "Thousands of Arkansans and millions of Americans are employed by Walmart, the largest private-sector employer in our nation," the statement said. "Sen. Sanders is effectively threatening their livelihoods by demanding Walmart to bow to Big Labor."

In an address at the start of the meeting, Walmart's McMillon said the retailer has increased starting pay by 50% over the past four years. In addition, he said, "we continue to adjust on a market-by-market basis to recruit and retain the talent we need to run a good business."

McMillon also said Wednesday that it's "time for Congress to put a thoughtful plan in place" to increase the $7.25 federal minimum wage.

However, they rejected the proposal Sanders presented, as well as proposals seeking to strengthen the prevention of workplace sexual harassment and to adopt a cumulative voting standard in the election of directors. The board had recommended that shareholders reject the proposals.

Official voting results will appear in a report to be filed next week with the U.S. Securities and Exchange Commission.

Unlike the celebration for employees and shareholders scheduled for Friday, Wednesday's meeting was all business, with no entertainment or celebrity appearances.

Friday's partylike event will be held at Bud Walton Arena in Fayetteville. About 16,000 Walmart and Sam's Club employees from around the world, along with retirees and shareholders, are expected to attend.

Information for this article was contributed by Doug Thompson of the NWA Democrat-Gazette. 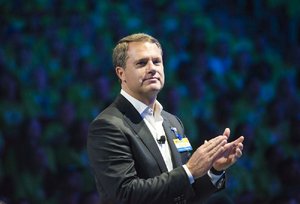 Print Headline: U.S. Sen. Bernie Sanders speaks to Walmart brass, urges them to give workers seat on board, higher pay