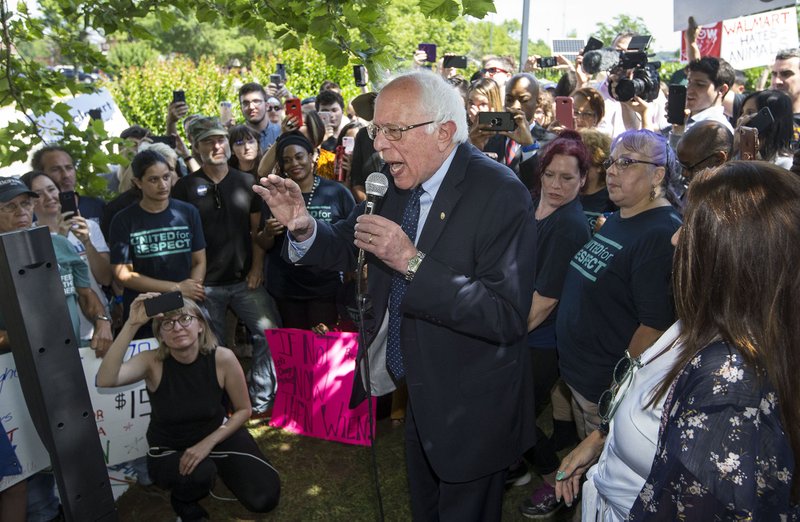 Bernie Sanders took his presidential campaign to the shareholder meeting of the nation's largest employer, demanding that directors of Walmart Inc. give a seat on their board to an hourly worker.

The self-described democratic socialist on Wednesday also called on the company to "do the right thing" and end "grotesque" greed and income inequality by boosting minimum pay for its workers to $15 an hour, although that measure wasn't the formal proposal put before the board.

The senator spoke for only a few minutes and then the Walmart board rejected the plan. He said the Waltons, who own the giant retailer, are 'the wealthiest family in the world' but pay 'starvation wages' to workers.

The appearance before the board gathered in Rogers gave Sanders a platform to take on President Donald Trump over the state of the economy. The Vermont senator argues that the growth the president boasts about still leaves behind rural and Rust Belt voters whose disillusion over job losses and low wages helped power the Republican into the White House three years ago.

The intervention could also give Sanders some traction when the two dozen Democratic contenders begin to compete for coveted endorsements of the nation's biggest labor unions. Hillary Clinton reaped the lion's share when she and Sanders vied for the 2016 party nod, but this time unions could split as they weigh a group of mostly progressive candidates who are embracing their agenda, analysts said.

Sanders, with his frequent attacks on Walmart, Amazon and other major employers, has been contrasting himself with former Vice President Joe Biden, the more moderate front-runner in the race for the Democratic nomination. Sanders also has been pulling some of the other contenders to the left on labor policy, said Democratic strategist Steve Rosenthal, who was political director of the AFL-CIO from 1996 to 2002.

"What Sanders has done is really raised the bar on the other candidates," Rosenthal said, adding that there is a "sea change" among Democratic candidates who are embracing employee rights and promoting unions as a way to boost worker income.

After the meeting, Sanders spoke to a crowd of supporters, reprising some of the themes he brought up earlier. He contrasted the challenges facing Walmart workers paid $11 an hour and 'living paycheck to paycheck" to what he said was the $175 billion fortune amassed by the Waltons.

"All we are saying to Walmart and the Walton family is to pay your workers a living wage.' he said, 'and that living wage is $15 an hour.'

Both Sanders and Senator Elizabeth Warren of Massachusetts in particular have put taking on individual companies and their executives at the center of their campaigns.

"Part of the audition during the Democratic primary is about figuring out who can really prosecute the case well on Trump being a fraud when it comes to standing up for the little guy economically," said Brian Fallon, who was Hillary Clinton's national press secretary in 2016 and isn't affiliated with any of the current campaigns. "To do that, you have to be able to speak in very stark terms and identify villains by name," which "both Sanders and Warren are very good at."

Among other things, Sanders is campaigning for a $15-an-hour minimum wage across the nation, equal pay for women, and guaranteed paid vacations and family leave. He has also sponsored legislation that would make it easier for workers to form unions at their companies.

At the shareholder meeting, Walmart's chairman of the board welcomed Sanders. Chief Executive Officer Doug McMillon thanked Sanders and others in attendance and made an expected presentation on the business that defended its pay and benefit policies.

He said the company increased starting wages by 50 percent over the last four years. He added that Walmart and other companies were raising wages but those actions weren't sufficient. He called on Congress to boost the minimum wage, but didn't mention any specific level, and didn't endorse the $15 an hour demanded by Sanders.

Walmart is a frequent topic for Sanders when he's out in early primary states greeting voters. At an ice cream social last week in Laconia, New Hampshire, Sanders said the mammoth retailer embodies what he calls the "rigged economy," pointing out that the Walton family is worth about $175 billion, making them the wealthiest family in the U.S.

Sanders's call for Walmart to add employee representatives to its board comes as the retailer's corporate governance practices face scrutiny.

Sanders has had some success in his broader quest, scoring a victory last fall when Amazon.com Inc. CEO Jeff Bezos announced that he would offer $15 an hour to more than 250,000 current employees and 100,000 seasonal workers. That move came after Sanders heaped criticism on the wealthy CEO and his profitable company, even introducing legislation that would tax Amazon, Walmart and other big companies whose workers draw on public assistance.

Sanders congratulated Bezos for doing the "right thing," but has continued to pressure Amazon in other ways. That includes teaming up with Warren to press Bezos on whether the company was illegally interfering in the right of Whole Foods workers to organize.