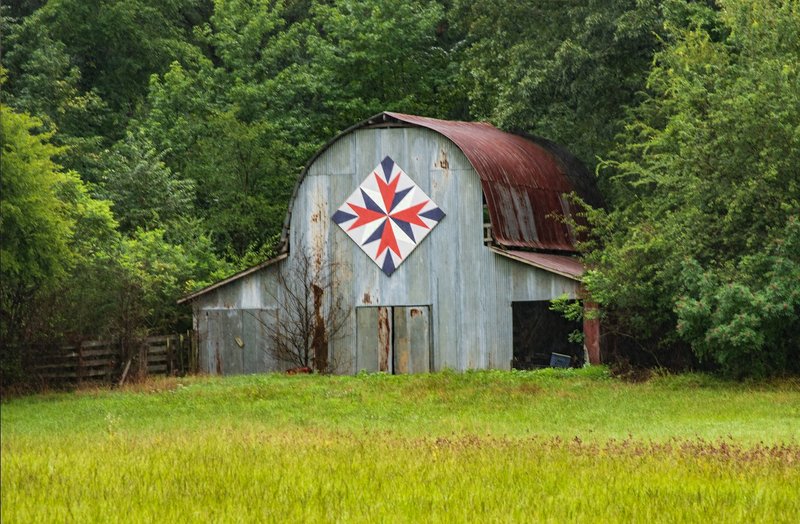 There's a red barn that sits in a field just off Arkansas 9 near the line separating Stone and Van Buren counties.

Located in the Rushing community, it's owned by Rodney and Angalee Rushing and was built in the 1940s by Clarence and Winnie (Rushing) Hinesley. It looks like a typical barn, sturdy and well kept for its age, maybe a little lonely all by itself next to the road.

But there are a couple of things hanging on it that make this barn different.

They are block quilts, wooden panels painted with textile-inspired quilt patterns. One hangs on the south end of the barn and another on the north.

These are two of the 20 block quilts that make up the Stone County Quilt Trail, the original leg of the nonprofit Arkansas Quilt Trail that currently includes Searcy, Van Buren, Perry and Baxter counties.

There are more than 90 colorful, folksy, handmade quilt blocks — sometimes called barn quilts — on the Arkansas trail. And they're not just affixed to barns. Some hang on houses and businesses, and there's even one painted on a silo near Perryville.

The wooden quilts are like colorful icons dotting structures alongside rural roads and in small towns, bright flashes that encourage a passerby to slow down and maybe even stop to examine more closely. And, as with their needle-and-thread cousins, their designs are often symbolic.

Stone County native Renee Carr is one of the trail's organizers. Rodney Rushing, owner of the Rushing barn, is her dad.

"I live within sight of that barn," she says. "The trail began in Stone County and that barn sits right inside the county line."

The idea for a quilt trail came after Carr, a certified public accountant, attended a conference in North Carolina about 10 years ago. Areas of that state were looking for something to help kickstart a moribund economy and "they developed a lot of tourist-based trails. One of them was a quilt trail," Carr says.

The idea of using block quilts to attract visitors originated in early 2001 in Adams County, Ohio, which now features a driving trail of 20 barn quilts.

The 58-year-old Carr thought it would be a perfect fit for Arkansas and, in 2014, she and her friend Glenda Osten began painting quilt blocks for the inaugural Stone County Quilt Trail.

But they weren't the first in the area to hang panels painted with quilt patterns.

Don and Carol Adams first installed quilt blocks on their property at 6957 Luber Road in Mountain View about 10 years ago. They have four.

Bear Tracks — blue, yellow, green and red track-like images on white background — was their first and is on the side of a weathered barn. Another is titled Windmill and is mounted on the same barn; Basket in a Basket and Turkey Tracks are the latest additions.

Photos of these and every other quilt on the trail, along with maps and directions, are at arkansasquilttrails.com, the official website maintained by Carr. It's a goldmine for planning a quilt-viewing road trip and learning the stories behind the quilts, like the one that inspired the pair on the Rushing barn.

Carr's great-great-grandfathers, who settled in the area separately in the 1870s, fought on opposite sides of the Civil War. In honor of them, the panel on the south side of the barn, painted by Carr's husband, Phillip, shows a Confederate star. The north-facing panel is of a Union star painted by Osten.

"We want the stories behind the quilt blocks — whether it's about the place, or the community, or the pattern itself — to be the central focus of the quilt trail," Carr says. "We want to preserve those stories and the local history. We focus on that and we put those stories and details on the website."

It wasn't long after the Stone County Trail got established that their neighbors in Searcy County to the west were like, "Hey, that's a good idea."

Darryl Treat is president of the all-volunteer Greater Searcy County Chamber of Commerce.

"We started in our first year and had six quilt blocks," he says. "We really picked up momentum the next year."

They certainly did. The county already has 22 quilt blocks, ranging from the Canine block at the Searcy County Fairgrounds in Marshall to the Crossed Canoes at 9826 U.S. 65 South in Saint Joe, and the happy, whimsical Bicycle Dresden Plate quilt block painted by Cynthia Garmoe on the Witts Springs School building, 196 Arkansas 16 West, Witts Springs.

The block that hangs on the Berry Shed at 200 W. Fair St. in Marshall is a nod to the area's past and present.

"Searcy County used to be known as the Strawberry Capital of the World," Treat says. "We wanted to preserve that history with a quilt block."

The shed was used by strawberry and, later, tomato farmers. Today it's home to the Searcy County Farmers Market, and the quilt that adorns it pays homage to all of its incarnations.

"That's part of our history and part of my family's history," says Treat, who designed the quilt with local artist Kathy Bergeron, who painted it.

Another unique Searcy County block is the Mariner's Compass, painted by Bergeron and Jack Benefiel, that wraps around a corner at the Gilbert General Store, 100 Frost St., in Gilbert.

The chamber of commerce voted to pay for materials for the blocks and artists volunteered their time, which helped get the program going, Treat says. Cost for materials, depending on the size, is around $150, says Treat, who owns the Elk and Eagle Trading Post in Leslie.

Nowadays, the chamber kicks in $50 each for up to five new blocks per year, Treat says.

The hope is that residents and visitors will get out and use the trail to explore Searcy County.

"We would love for people to say, 'Let's go see the quilt blocks' and they stop in at stores or at a restaurant," Treat says. "It helps the county out economically as tourists drive around and spend a little money."

Owners sign an agreement with the state trails group, Carr says, that gives the organization permission to publicize their location and patterns have to be approved by the group.

"We let them know that there will be traffic stopping by," she says.

Blocks are often painted on treated plywood and range in size from 4-feet-by-4-feet up to 8-feet-by-8-feet.

Patterns come from a "wide variety of sources," Carr says. "Quilt guilds are good about coming up with patterns. The Internet is also a good source."

Sometimes a painted quilt block is inspired by an actual quilt.

"A good example of that is near the entrance of Fairfield Bay," Carr says, referring to The Swenson Double Wedding Ring block at 14085 Arkansas 16 at Fairfield Bay. Painted by Anna Massery, it was inspired by a wedding ring quilt given to her by her grandmother as a wedding gift.

"She painted it with the same details, if you can imagine, as the fabric," Carr says. "It's a re-creation of a special quilt."

Businesses are also a ideal block quilt spots. Remember Me Quilt Shop at 201 N. College St. in Mountain Home has a pair of blocks on its facade, and the Fairfield Bay Marina on Greers Ferry Lake has one painted by Patti Rye with fish around a red and white Diver Down symbol.

Eight of the 21 block quilts on the Perry County Trail were made by Debbie Park and can be found at the Double D Lazy T Ranch and Bed and Breakfast, 3109 Arkansas 60, that she owns with her husband, Tommy.

She caught quilt block fever after reading a story in Country magazine about the Ohio quilt trail and made her first one in 2012.

"My husband and I figured out how to do them by trial and error and I haven't stopped since," says Park, the former owner of a gift shop in Heber Springs. "My passion is antiquing, and this just seemed to accentuate that, the quilt patterns and the novelty of it. I think they're pretty, and they have created quite a bit of interest from people who stay at our bed and breakfast."

They may be made of wood and paint, but the panels are attention magnets.

"We've had a lot of people drive by and slow down, and even come down our driveway to look," Park says, adding that the visitors don't bother her. "If it helps tourism in Perry County, that's wonderful."

To create her blocks, Park says she starts with a pattern on a grid on a sheet of paper.

"I'll play with colors and sometimes will get my grandchildren's crayons out and experiment with how I want the colors to look," she says. "It's a process on paper long before you ever get to paint. It's not real simple."

The hardest to do, she says, was the Patriotic Pinwheel that she painted directly onto a silo.

"I had to do a lot of free handing on that. It was the most labor-intensive, and I think it's my favorite. I really like the way it looks."

The state trail group got some help early from the Rural Community Alliance, Carr says, but is now a stand-alone organization run by volunteers and assisted by a few sponsorships.

It takes a minimum of 12 blocks to constitute a trail and get posted on the website, and Carr says she is contacted almost weekly by people interested in starting a trail in their county. One of the first steps, she says, is finding a volunteer to be the county's trail coordinator.

"It's growing very organically. People see them and get excited and go back home and talk to their friends about them. I'm getting calls from all over the state."

A new brochure, with pictures of all the Arkansas quilts, descriptions and a map, will be available at the state's welcome centers, Carr says.

It's just another step in the quilt trail's march across the state.

"I'm really happy with the growth," Carr says. "There's some excitement, and it's developed into something really nice."