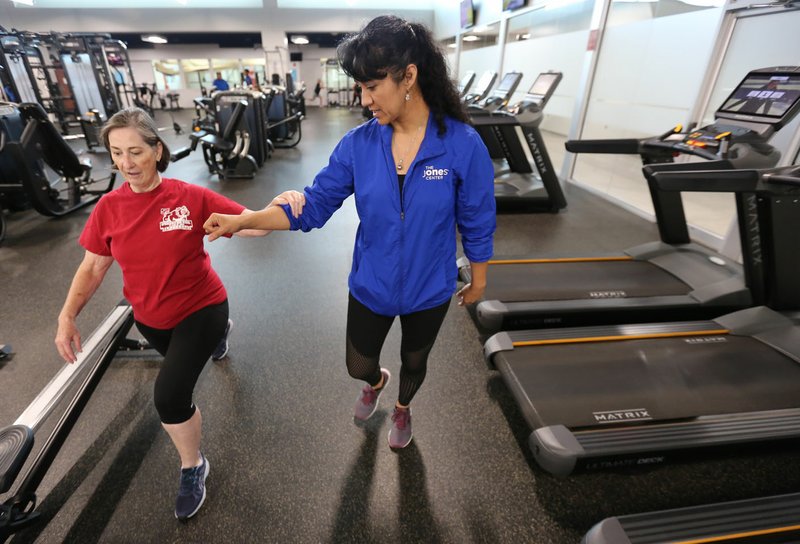 NWA Democrat-Gazette/DAVID GOTTSCHALK Luisa Espinoza (right), a personal trainer, guides Kathryn Birkhead through a set of lunges July 8 at the Jones Center in Springdale. Espinoza immigrated from Mexico and teaches her classes in both English and Spanish.

Aguilar regularly teaches dance and Zumba classes, which can include salsa and bachata, at the Jones Center in Springdale and at Tyson plants on employees’ lunch breaks. She occasionally leads classes at the University of Arkansas and Crystal Bridges Museum of American Art.

Angela Garza, 33, takes Aguilar’s Zumba class twice a week. Garza had a gym membership, but let it expire because the classes are more fun, she said.

Luisa Espinoza is a personal trainer at the Jones Center and regularly speaks to her clients in Spanish, she said. Espinoza, who is also from Mexico, said some of her clients have a difficult time understanding other instructors or knowing how to ask questions in English.

Local health leaders say Aguilar and Espinoza are part of a regional effort to close the cultural and language gaps contributing to health issues among racial and ethnic minorities.

The commission works to make sure all racial and ethnic minorities have access to health care; to find ways to educate the state’s minority residents; and to address, treat and prevent diseases and conditions prevalent among minority populations.

Love gave an example of a patient whose doctor told him not to eat red meat. He thought he was following doctor’s orders by always cooking steak until it was well done.

Dr. Jordan Powers, a University of Arkansas for Medical Sciences internal medicine resident, said Marshallese patients would sometimes nod in agreement than say they don’t understand something or ask questions.

The clinic averaged about 119 patient visits a month from September to June, according to data from UAMS Northwest.

The clinic staff focuses on education such as explaining foods such as rice or ramen, both common in a traditional Marshallese diet, aren’t helpful in preventing or managing diabetes. Between 40 and 50 percent of Marshallese adults in Northwest Arkansas has diabetes or are on the verge of developing diabetes, Bonnie Faitak of UAMS Northwest said.

The Northwest campus is also home to the Center for Pacific Islander Health, a research program designed to decrease health disparities and develop culturally sensitive approaches to education and treatment.

Community Clinic, a nonprofit group, has also targeted Marshallese patients. Community Clinic has 13 clinics, including six clinics based at schools, in Northwest Arkansas and sees patients regardless of their ability to pay.

The clinic sees 37,500 patients a year, and more than half speak a language other than English, said Kathy Grisham, executive director of Community Clinic. Fifty-three percent of patients are Hispanic, 8% are Marshallese and 1% are black. The clinics have some providers and several staff members who are bilingual and can help interpret, said Amanda Echegoyen, chief operating officer at Community Clinic.

“We hire from the community that we serve,” she said.

Areas where racial and ethnic minorities live, work and play also tend to have fewer safe places to walk outside and fewer grocery stores, Love said.

“They may have access to health insurance, but if they don’t have a vehicle to drive, then having insurance doesn’t benefit them,” she said.

While 92-93% of non-Hispanic white people in the state had health insurance, 74% of Hispanic people did, according to the Minority Health Commission study.

Likewise, Echegoyen said some people without transportation or not enough money for nutritious food are more likely to walk to a nearby convenience store and buy junk food.

Grisham and Echegoyen said minority patients have higher rates of diabetes and hypertension because of a lack of access to healthy food and sometimes a lack of knowledge of good nutrition.

A traditional Hispanic diet, for example, includes lots of carbohydrates and meat. Echegoyen said the clinic once saw a patient who was told to cut tortillas out of her diet to manage her diabetes. Her health hadn’t improved after a few follow-up visits. The doctor found she replaced tortillas with rice, another carbohydrate.

People in the Marshall Islands don’t have access to a large supply of fresh vegetables. A traditional Marshallese diet isn’t heavy in vegetables, so a doctor telling a Marshallese patient to eat more vegetables isn’t enough, Echegoyen said. Medical professionals have to be careful to teach patients what to replace unhealthy options with and how to prepare healthy foods. Community Clinic has nutritionists on staff.

Taylor Kelamis, a nurse practitioner, recently stood in front of an iPad inside Mercy’s Springdale clinic. Within a minute of selecting “Spanish,” a woman appeared on the screen and said she would be her interpreter that day.

Mercy can access interpreters for 200 languages through this service, LanguageLine Solutions, so patients who don’t speak English can speak to their doctor or nurse. Kelamis also speaks Spanish, and the clinic has three native Spanish speakers.

One of those speakers, Larixa Gonzalez is originally from El Salvador and is a certified medical assistant. She said she finds herself interpreting for Spanish-speaking patients almost every day. Patients’ Spanish can vary depending on where they’re from and can differ from textbook Spanish. An interpreter can help patients effectively communicate their symptoms to their doctors and fully understand what their doctors are telling them, Gonzalez said.

Northwest Health offers interpreters for patients who don’t speak English and has community outreach programs to target minority groups, said Beth Wright, spokeswoman. For example, the hospital has sponsored free diabetes screenings during November, Diabetes Awareness Month, and targeted black and Hispanic communities because they are at higher risk for diabetes.

“Most recent initiatives have included discussion about a Marshallese-focused job fair as well as incorporating Marshallese culture education into new staff orientation and the annual orientation with current staff,” Wright said.

“We are planning to focus more efforts on the recruitment of minority/bilingual staff to better meet the needs of our minority patients,” she wrote.

The University of Arkansas for Medical Sciences has a Center for Diversity Affairs, which focuses on recruiting racial and ethnic minority students, among other tasks. Brian Gittens, vice chancellor for diversity, equity and inclusion, said UAMS wants to help create that diverse workforce.

The school recruits from historically black colleges in the state, such as Shorter College, the University of Arkansas at Pine Bluff, Philander Smith College and Arkansas Baptist College, Gittens said.

The school also has several programs intended to get kids interested in health care targeting girls and underrepresented racial minority groups. The junior science, technology, engineering and mathematics academy is a two-week program for students in kindergarten through sixth-grade at the main UAMS campus in Little Rock. About 90% of applicants in 2018 were black.

Each program may choose to give extra points on students’ applications to admit more students of underrepresented groups, which can include race and gender, said Mark Wallenmeyer, dean of health professions.

The University of Arkansas’ College of Education and Health Professions doesn’t specifically try to recruit minority students, but the college is included in the university’s overall effort to do so, said Shannon Magsam, spokeswoman for the college.

Suzanne McCray,, vice provost for enrollment and dean of admissions, said minority recruitment is a priority for the university.

“We are energetically investing in this area. In admissions, we have created a team to recruit in the Delta and to focus on diverse communities throughout Arkansas,” she wrote in an email.

• 2% of white respondents’ regular health care clinic had no staff members of their race, compared to 35% of Hispanic and 22% of black respondents.

• 5-8% of white respondents said they had been victims of discrimination while getting health care, compared to 18-19% of black respondents and 19% of Hispanic respondents.

• 85-88% of white and black respondents said it was very or somewhat easy for them to understand written health care information, compared to 76% of Hispanic respondents.

About 80% of UAMS students are white, according to the school. About 10% are Asian, 5% are black, 3% are Hispanic and 1.5% are American Indian. The data includes 693 students in their second, third and fourth years of medical school, but not incoming freshmen.

About 82% of the 1,608 nursing students at the university’s Eleanor Mann School of Nursing are white, according to UA data. About 7% are Hispanic, 3% are black, 2% are Asian and less than 1% are Hawaiian or Pacific Islander.