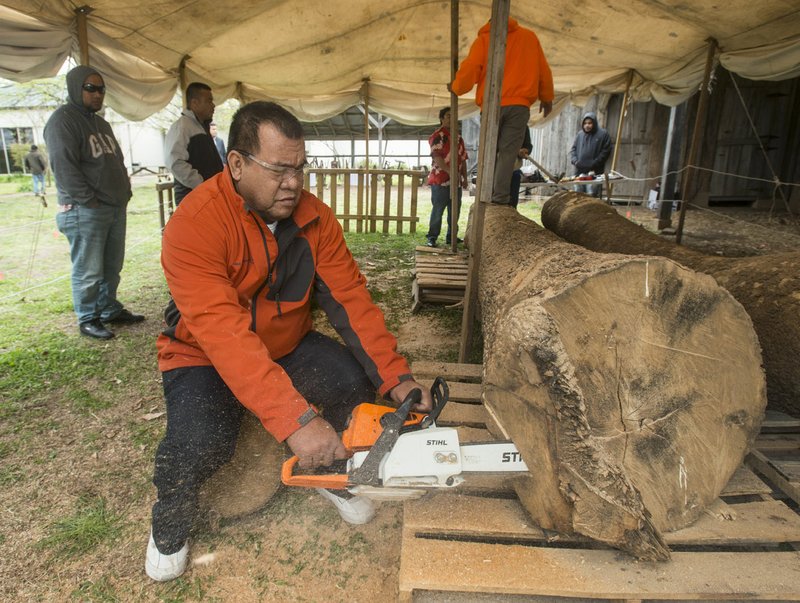 File Photo/NWA Democrat-Gazette/BEN GOFF &#8226; @NWABENGOFF Liton Beasa, master canoe builder, begins shaping a log in April 2018, during a ceremony to launch a project to build a Marshallese KorKor, a type of outrigger canoe, at the Shiloh Museum of Ozark History in Springdale.

Christian Balos, 30, is a man about town. He works for the Arkansas Support Network and volunteers as a youth leader and speaks about climate change for the Marshallese Education Initiative.

He also takes advantage of the area's arts and cultural institutions.

"It's interesting because the Marshallese language really doesn't have a word for 'art,'" he said.

Balos and his 73-year-old grandmother just wandered the hall together the last time he visited Crystal Bridges Museum of American Art in Bentonville. They stopped for a closer look when something caught their eye and shared what they saw and experienced.

"The mission of the museum is to welcome all celebrations of the American spirit," said Rod Bigelow, the executive director and chief diversity and inclusion officer at Crystal Bridges. "It's important to create that for absolutely everyone, especially our new citizens," he continued. "It's important to share their perspectives, their dreams, their lives, their work, their experiences."

"History isn't just white," said Allyn Lord, executive director of the Shiloh Museum of Ozark History in Springdale, which covers six counties in the Ozarks. "It's everyone who's ever lived here -- Native Americans, African Americans, Latinos, Marshallese, Asian," she said.

"We don't want to tell just the white history. We want to tell the history of everyone. But we can not do that without building relationships among the entire community."

Area arts organizations have adapted to entice nontraditional audiences into their venues. They've found success presenting artists and art from diverse cultures and traditions, they said, but challenges remain.

"We still have work to do," said Lourdes "Lulu" Peredo, the welcoming coordinator for the city of Springdale. "We need to build more bridges.

Local artists from non-Anglo cultures also noted some of the challenges they face.

Some of the best artists in Northwest Arkansas who are immersed in Latin culture aren't fluent English speakers, said Araceli Lopez, director of the Latin Art Organization of Arkansas, which is based in Springdale. The language barrier makes it hard for those artists to attract either sponsorships or commissions, she said.

"They don't have enough money for marketing," she said. Therefore, they cannot hire English-speaking representatives to promote their work, according to Lopez.

Balos said his grandmother doesn't like visual art. "Me, I'm a big fan."

The key to attracting Balos' grandmother and other people from the area's diverse population is to plan programs with links to their cultures, said April Brown, president of the Marshallese Education Initiative. The organization is a nonprofit group in Springdale working to preserve and promote Marshallese culture.

"It's always good to see a representation of yourself," Balos said, affirming Brown's philosophy works.

"We've had the most success when our audiences self-identify with what's on stage," said Scott Galbraith, the vice president of programming at the Walton Arts Center in Fayetteville. "Everyone wants to see themselves reflected in stories and performances."

The arts center offered Kealoha, poet laureate of Hawaii, in 2018. The Pacific Islander shared The Story of Everything, a creation story in epic poem format tracing man's origins from the big bang theory to the present using science, poetry, storytelling, movement, music, visual art and chanting, according to a news release at the time.

The center offers "Mirror, Mirror: The Prints of Alison Saar from the collection of Jordan D. Schnitzer and the Schnitzer Family Foundation" through October. The collection features lithographs, etchings and woodblock prints by the artist who has a racially mixed background. She uses her art to address issues of race, gender and spirituality.

"This is something they wanted to do, and they needed somewhere it could happen, and they thought of us," Lord said.

The museum staff has been telling the story of the Marshallese in Northwest Arkansas, including recording oral histories. The staff built relationships by attending various activities with the Marshallese.

"Once the project was over, we saw the Marshallese community come here," Lord said. "They'd bring their families. They felt they'd found ownership, but they'd always had it."

Perhaps a measure of a culture's influence comes when businesses begin to cater to the communities. For example, stores stocking the fish Pacific Islanders miss from their homelands or clothing stores carrying soccer jerseys of Mexico's favorite teams.

Local radio stations offer programming, news and even Razorback sports in various languages of the region, including Marshallese and Spanish.

Fans of rhythm and blues and hip hop music enticed the owners of radio station KISS to bring their style of urban music to Northwest Arkansas, said Marcus Caruthers, vice president and general manager of Perry Broadcasting of Arkansas.

Their presentation of "urban" music engages listeners on many musical genres -- from rhythm and blues to soul to hip hop to rap to jazz.

The music mix appeals to a younger audience, but Caruthers noted the station's largest audience demographic is white women from 18 to 40 years of age.

"It's music that speaks directly to the heart. It initiates action," Caruthers said. "It's an opportunity to engage and help people. We want to be open and welcoming to all of Northwest Arkansas."

KDIV is a low-powered, noncommercial station. It's part of the nonprofit Voice of Diversity Organization and exists largely on grant money and donations, according to an article at the time of the launch. It cannot sell advertising because of Federal Communication Commission rules governing low-powered stations. The rules require it to offer community educational programming.

For Caruthers, all the shows are on his personal don't-miss list.

"Music is a medium that ties and unties people," he said. "The community as a whole is growing and culture is growing. It's really engaging all of us."

"Yes, it was worth it, and it's getting easier," Galbraith said. "There's such a focus of diversity around the world."

Today, some booking agents specialize in international artists, he noted.

"In every culture and in every space creating art was inherent," Bigelow said. "People have the drive to create art. But it was not collected, not celebrated, not saved and preserved. Much of it does not exist."

Instead he and the Crystal Bridges staff can see the art in the traditional mats, tools and beads made by various cultures. They also find importance in the way these skills, these arts were passed through generations.

"We need to shift the way in which we collect and share art," he said. "We need to be more broadly interpreting."

The museum staff also is upgrading its early American galleries with pieces from a broader demographic range.

"It will follow the same timeline, but present different issues," Bigelow said.

"American history is wonderful and amazing, challenging, difficult and tragic as seen through the eyes of the artist," he continued.

Area cultural institutions have updated their procedures to access all communities and welcome people of all cultures.

The first hurdle for people of various cultures might be the language issue, Peredo said. Her position as a welcoming coordinator was developed and is paid for by the Walton Family Foundation and Tyson Foods.

Peredo came to Arkansas about a year ago, after earning a bachelor's degree in political science and psychology at Centre College in Danville, Ky. In addition to the 20-something's position with the city, she helps her parents with their Springdale restaurant, Mi Mexico.

Peredo said most institutions have a done a good job at translating program announcements.

Balos said he receives notices of the arts centers' events on social media and that's how he shares them with family and friends.

"Even before my time here, back when Bob Besom was the director, he had a big sign on the door that said, 'Holas Amigos,'" Lord said. Besom was director of the museum from 1980 to his retirement in 2015. He continues to serve the museum as director emeritus.

Today, the Shiloh Museum displays the information in its exhibits in both English and Spanish -- the first museum to do this in Arkansas, said Lord. She said the museum is planning similar displays in Marshallese.

Sometimes, racial and ethnic minorities in the region aren't seeking something new.

Michelle Pedro, 37, the executive assistant of the Marshallese Education Initiative, said her culture's socialization and entertainment revolves around its churches, from a kemen -- a baby's first birthday party -- to funerals.

Hispanic members of the community also socialize close to home, Peredo said. People from the same country, region and state gather. People who come from the same regions have more in common, she said.

A family's economic situation might affect a family's participation in the arts, Peredo said.

Tickets range from $40 to $125 for the Aug. 20 show featuring the urban style music of Nelly, TLC and Flo-Rida at the Walmart AMP in Rogers. The annual Christmas concert of the Symphony of Northwest Arkansas in December comes with ticket prices from $33 to $55.

People can enjoy free access to both the Shiloh Museum and Crystal Bridges. The Walton Arts Center regularly offers admission to its performances for school groups. For Kealoha's performance, the arts center offered free tickets through the Marshallese Education Initiative. The arts center's 10x10 Series presents a variety of artists and performances for $10 a ticket.

A lack of money can cut both ways in growing cultural opportunities in the region, Lopez said of the Latin Art Organization.

"We're trying to build a bridge between the Anglo community and those artists, but we don't have the resources,"she said.

Her organization doesn't have the money to promote its own events despite a growing Hispanic community and an expanding economy, she said.

"Even advertising on Facebook takes resources we don't have," she said.

And then there's the language barrier in the events themselves, she said. English-speakers tend to not go to performing arts in Spanish and vice-versa.

Local institutions have discovered many ways to look at diversity.

"From the perspective of the audience, the staff, the board, the stakeholders and volunteers," Galbraith said. "We want to consider what are the barriers to participation," he continued. "Are they physical? Are they perception? We want to address those barriers.

Gailbraith, Bigelow and Lord feel their organizations need to add representatives of all Northwest Arkansas cultures to their boards and staff.

The Shiloh Museum board includes diversity in the areas of race, ethnicity and age, but the challenge is representation on the staff, as personnel turnover is low, Lord said.