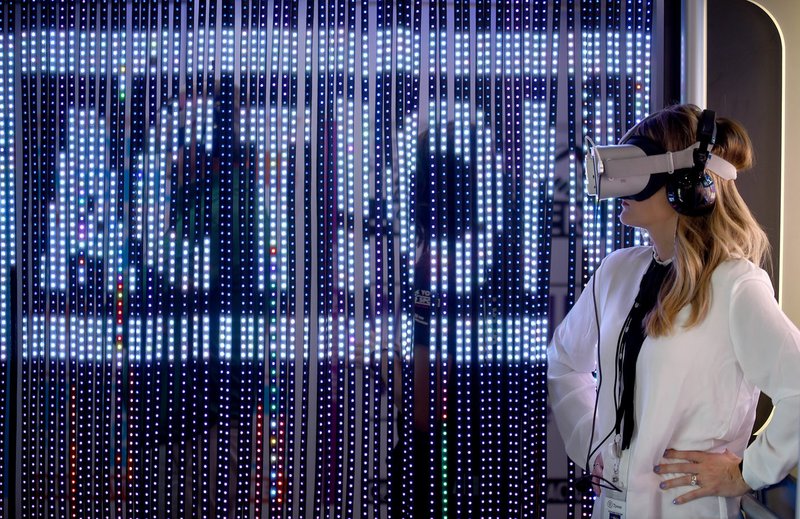 NWA Democrat-Gazette/DAVID GOTTSCHALK Kate Jordan with Tyson Foods looks through a virtual reality headset May 13 as she tours the CEO Action Check Your Blind Spots Unconscious Bias Tour bus at Tyson headquarters in Springdale. The tour is designed to give people the opportunity to learn about and explore ways to mitigate unconscious bias in their everyday lives.

Northwest Arkansas' businesses have made inroads with diversity, and will have to continue if they want to remain relevant to employees and customers, officials said.

"It will be huge in the next 10 to 20 years," said Yvette Murphy-Erby, vice chancellor for diversity and inclusion at the University of Arkansas. "Companies and institutions that don't get it will find themselves left behind in many ways. It used to be the right thing to do. Now, it's the necessary thing to do if you plan to survive."

A McKinsey & Company report from 2015 found:

• Companies in the top quartile for racial and ethnic diversity are 35% more likely to have financial returns above their respective national industry medians.

• Companies in the top quartile for gender diversity are 15% more likely to have financial returns above their respective national industry medians.

• Companies in the bottom quartile both for gender and for ethnicity and race are statistically less likely to achieve above-average financial returns than the average companies in the data set (that is, bottom-quartile companies are lagging rather than merely not leading).

Companies with more racially and ethnically diverse executive teams were 33% more likely to see better-than-average profit, according to a Forbes report. At the board of directors level, more ethnically and culturally diverse companies were 43% more likely to see above-average profit, showing a significant correlation between diversity and performance.

Another survey found for every 1% increase in a company's cultural diversity, there was a corresponding 9% increase in revenue, according to Forbes.

Diverse company a plus

Employees want to work for diverse and inclusive companies, said Deb Sinta, vice president of Talent and Culture with Tyson Foods. Companies also have to be diverse because their customers are, she said.

"We believe it's an absolute differentiator for us," she said. "People want to work for a company with an end game. We are competing for talent, all companies are."

Walmart's U.S. workforce of more than 1.5 million associates is 22% black, 14% Hispanic, 4% Asian, 1% Native Hawaiian or Pacific Islander and 1% American Indian or Alaskan Native, according to the company's 2018 culture, diversity and inclusion report.

"We must become more diverse and more inclusive to achieve our business potential. Diverse associates and diversity of thought drive creativity and innovation," said Doug McMillon, Walmart president and CEO, at the company's analyst meeting in October.

"Diversity lived dormant for awhile, but it's now much more acceptable," said Hill-Chandler, who is black.

Arvest is in the early stages of compiling diversity representation data across the company, she said. Hill-Chandler has worked to increase minority workplaces in her business career for more than 25 years. Along the way was a stop at Walmart before moving into her newly created role at Arvest in March.

Murphy-Erby, who is black, said the younger workforce is more diverse than it has been. They also want to work for employers that are diverse, she said. Companies will need to work to become more diverse to remain relevant, she said.

Diversity and inclusion is what the younger workforce has always known, Hill-Chandler said. Younger employees want to be a part of diverse settings because that's what they know, she said.

"You have to attract and retain good employees," she said. "If they don't see it, they won't do it."

Adrian Dominguez with the League of United Latin American Citizens' Northwest Arkansas chapter said there have been gains in diversity hiring in the area over the last five years, but he sees room for improvement.

"Diversity has to be a part of management's game plan," he said. "You can bring in talent that is diverse, but then you have to maintain it. Some don't find their niche, and they move on."

Many minority workers who leave the area mainly cite the lack of a big city nightlife as their reason, Dominguez said.

Jasmine Hudson is a merchandise planner for Walmart and a local blogger. She said the biggest challenge companies here have in recruiting minorities is blacks such as her, for example, make up only 2% of the population -- and that figure is comprised largely of university students, not fellow young professionals who have the same interests and social life.

"When companies here try to recruit a minority, there is a lot of apprehension: Who am I going to associate with? Where am I going to worship? Who can do my hair?" Hudson said.

There is a great deal of turnover even among the small minority community present, she said. Hudson and friend J'Aaron Merchant started their JazzyJaeNWA blog and other social media accounts and about 60 people joined in, she said. Of those 60 originals, few are left, she said.

"We have to start over every year," Hudson said.

The reasons for the turnover aren't just professional.

"My parents want me to come back to Cincinnati," Hudson said. "You can't help but notice when more than 90 percent of the population does not look like you, too. And on top of that, the whole city in those other places don't close up at 9 p.m."

So why does she stay?

"For me, it is because I want to be part of the change I want to see," Hudson said.

Sinta said companies have worked to become more diverse and inclusive for the more than a decade. Some companies made more diverse hires, "because it was the right thing to do," she said. Others are motivated because they've learned a more diverse workforce makes them more competitive and draws talent from a deeper pool.

"No Fortune 500 company has cracked the code on this," she said. "But some companies, Tyson included, have tried to accelerate it."

Tyson has partnered with EngageNWA, an organization aiming to build a strong community of global talent in Northwest Arkansas and to maintain the region's status as one of the nation's best places to live, according to the company website.

EngageNWA announced a four-year plan outlining initiatives to make the region an inclusive and welcoming environment and to ensure residents from diverse populations have access to the resources they need, according to its website.

Whitney Yoder, Cox Communications public affairs manager for Arkansas, said Cox doesn't break down employee demographics externally, but the company has been recognized for its efforts by DiversityInc magazine, she said. The company has been on the magazine's Top 50 list 14 times and is currently ranked No. 11.

Companies must strive for diversity, but they cannot forget about inclusion, Hill-Chandler said. Diversity is more about representation on the surface, she said. Inclusion means employees feel valued and respected and feel free to be themselves, she said.

"Hopefully, people won't see (diversity and inclusion) as a separate initiative," she said. "Hopefully, it will just be a part of the fabric of an organization."

Employers must continually be aware of any unconscious bias when it comes to hiring a diverse workforce.

The "Check Your Blind Spots" tour was at Tyson Foods headquarters in Springdale on May 13 as one of 100 nationwide stops. The interactive bus and exhibits raise awareness of unconscious bias, or blind spots, and promote diversity and inclusion within communities and the workplace, said Ryan Mosher, tour manager.

The bus tour has made stops across the United States, including the Bentonville Film Festival. More than 1,000 people took the tour at the film festival, Mosher said.

Many people say they don't have any biases, he said. The truth is, many people have a bias, but they just don't know it, he said.

The bus tour takes about 15 minutes as people are put into different scenarios and asked to spot the biases. It's not always so easy.

"Bias is a reality; we all have them," he said. "You have to be conscious of it so you can address it."

Jess Hines, a Tyson Foods employee, said she liked what she learned on the tour.

"It makes you more aware and acute when unconscious bias happens around you," she said. "It was a really good experience that I didn't know I needed."

A 2003 study by the Massachusetts Institute of Technology and the University of Chicago sought to identify whether hidden biases play a role in the hiring process. The researchers sent out 5,000 resumes responding to job ads in the Boston and Chicago metro regions. They randomly assigned stereotypical white-sounding names to some and stereotypical black-sounding names to others and found those with white-sounding names received 50 percent more interview invitations than those with black names, according to the National Association of Independent Schools.

Minority job applicants are "whitening" their resumes by deleting references to their race with the hope of boosting their shot at jobs, and research shows the strategy is paying off, according to a Forbes story in 2017.

EngageNWA has hosted several workshops in partnership with the UA's Office for Diversity and Inclusion around unconscious bias applying to employee recruitment, hiring and retention, Lemaster said.

Diversity will continue to shape Northwest Arkansas in the coming years, officials said.

"We hope that more people from diverse backgrounds will move here and stay here for the long term. In 20 years we hope to see truly inclusive environments across our business community. We are headed in the right direction to be able to achieve that," Lemaster said.