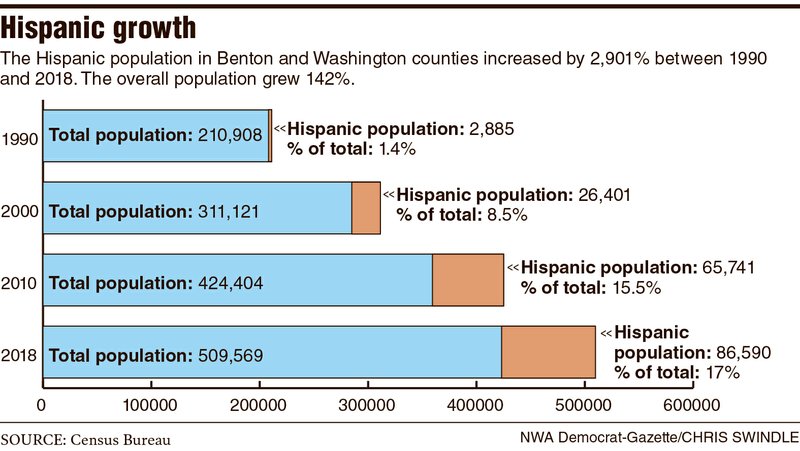 NWA Democrat-Gazette/DAVID GOTTSCHALK Barbara A. Lofton is director of diversity and inclusion at the University of Arkansas' Sam M. Walton College of Business. Inclusion isn't as simple as the majority present in the region accepting newcomers, Lofton said. "There is a difference between being invited to the dance and being asked to dance once you are there."

Racial and ethnic diversity will continue to grow in Northwest Arkansas whatever those living in the region do, experts say.

The goal area leaders set is for inclusion -- harmony, the recognition of common interest and the practical, unified pursuit of that interest -- to rise with it, said Barbara Lofton, director of diversity programs at the Walton School of Business at the University of Arkansas.

Millions of dollars are being spent in Northwest Arkansas to increase diversity and inclusion of all races and ethnic groups. A special report in today’s edition takes a look at the successes and remaining challenges of those efforts.

"It's the difference between a salad bar and a salad," she said. "A salad bar has all the ingredients, but they're all in their separate compartments. Somebody has to toss the salad."

Large employers such as Walmart, Tyson Foods, J.B. Hunt Transport and their founding families have backed inclusion efforts in many key quality-of-life areas in the region such as education, the arts, health, housing and employment.

TRUE shares the goals of EngageNWA, which is a Walmart Foundation-funded, Northwest Arkansas Council-affiliated initiative. TRUE is an acronym for train, report, uplift and engage, each referring to a different aspect of the overall program.

The $2.5 million includes a grant to the Arkansas Community Foundation to oversee the project and create training curriculum as well as separate grants awarded to participating groups to help them follow up on their training and ideas with action, according to a spokesman for the Walmart Foundation.

A 20-member advisory council will oversee the entire effort and includes officials with the University of Arkansas, Protestant and Catholic churches, the Arkansas Coalition of Marshallese, Fayetteville Public Schools, Tyson Foods and the Islamic Center of Northwest Arkansas.

The Northwest Arkansas Council and the Arkansas Poll, run by the UA, are surveying to establish a baseline on inclusion within the community, said Margot Lemaster, executive director of EngageNWA. Progress can then be measured by taking similar polls in future years and seeing the changes, she said. The council is a group of regional community and business leaders.

Lemaster said efforts to encourage inclusion are a healthy sign suggesting a normalization of the issue.

Lofton, Lemaster and Mireya Reith, executive director with Arkansas United, an immigrant rights group in Springdale, said they believe progress is being made toward a more inclusive region, but work remains.

Inclusion isn't as simple as the majority present in the region accepting newcomers, Lofton said.

"There is a difference between being invited to the dance and being asked to dance once you are there," she said.

True inclusion requires effort by all.

"I went to a cultural event where English wasn't the primary language," Lofton said. "No one was speaking English, and I couldn't read the menu. I didn't know what I was ordering at the meal."

Efforts to make the region more racially and ethnically inclusive generally fall into three categories: to have the institutions such as schools reflect their communities; to train those in positions of authority such as police and business leaders; and to offer resources to help minorities in historically underachieving areas such as entrepreneurship and home ownership.

Recognizing more than one viewpoint brings both new ideas and a more complete picture of any given situation to any group or region embracing it, the women said. Inclusive organizations are better-led and stronger, they added.

"The biggest measure of progress is actually putting a diverse group of people among the decision-makers," Reith said. "There is resistance to that at all levels, though it's not deep. Progress is being made, in part because there's been a lot of investment in this."

On equity, this region like others has its "haves" and its "have nots," Lofton said. But so far the "haves" are working to bring the rest of the region up, she said. That's important, she said.

Such efforts at reducing inequities are commendable and far-sighted, Lofton said.

"When you try to leave someone behind, who winds up paying for it? The taxpayer. People become part of the system."

Supporters of these efforts have ambitions going beyond the region, she said.

"They'd like to see Northwest Arkansas become a model for other communities wanting to do the same," Lofton said.

The region would make faster progress toward inclusion if others would leave the region alone, Reith said.

She pointed to state legislation such as Act 1076 of 2019. The bill denies state grants or similar assistance to cities adopting a "sanctuary policy" limiting local law enforcement from asking about immigration status.

The law interferes with practical policing and public policy in cities with large immigrant populations, sows mistrust and opens up local law enforcement to lawsuits, she said.

"One big problem we have is that people see those who favor inclusion as special interest groups," Reith said.