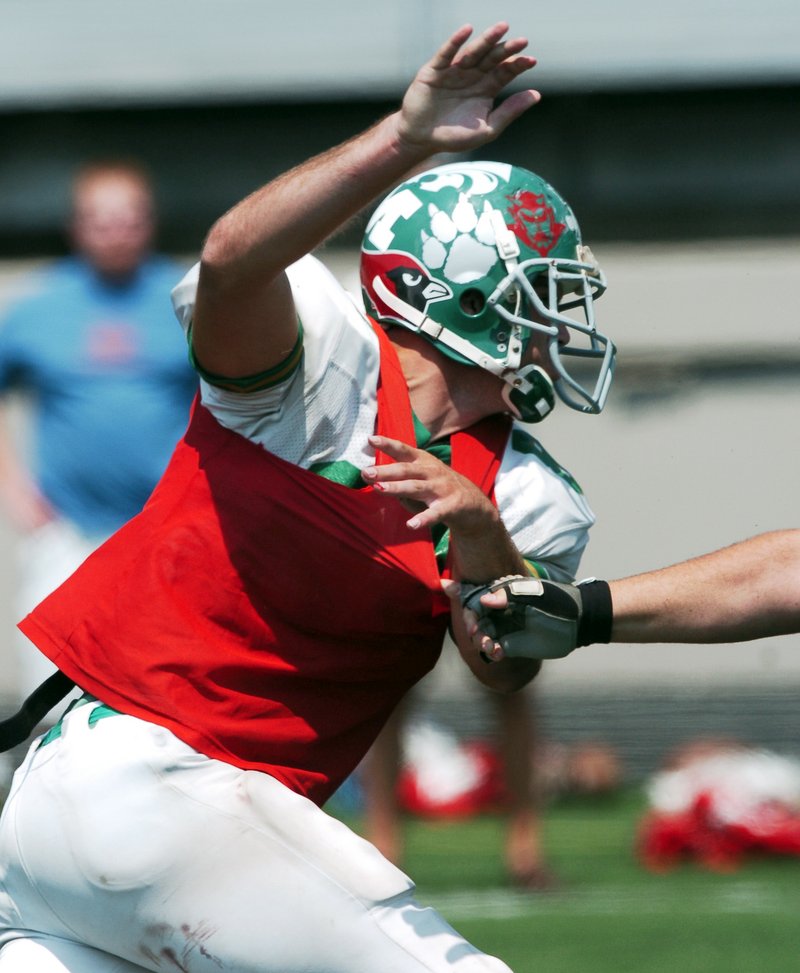 June 22, 2005: West all star end Ryan Evans scrambles around the corner during practice in Fayetteville.

When his playing days finally ended at Alma in 2005, he had produced the greatest overall athletic career in the storied history of the Airedales. 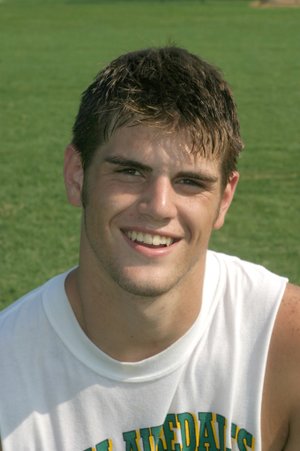 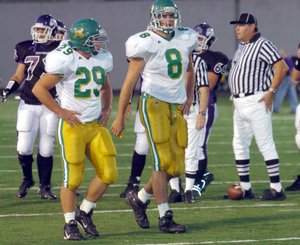 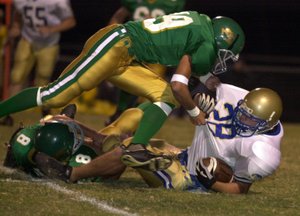 "When you look at the wide variety of sports that Ryan participated in and how successful both the teams that he played on and he was as an individual, you can make the case for him to be the best athlete that I'm aware of that's participated in athletics at Alma High School," said Mike McSpadden, retired athletic director and former basketball coach. "He was such a rare combination of size, and strength, and speed and athletic ability."

Evans even figured out at an early age some of the intricate workings of sports.

He knew the quicker his team got three outs, the sooner he would get to bat again.

That really worked out well when he caught a line drive and started a triple play in T-ball.

It was football, basketball, and track and field in which he really excelled, though.

"I agree with that," said Brooks Witherspoon, Alma's defensive coordinator until 2005 and now an assistant at Southside. "When I saw a tweet on the Best Ever, he was the first one I thought of for Alma. He could do anything. He excelled at everything."

The success that Evans had from start to finish of his senior year, from August through May, is one for the ages.

"I've had people tell me that if I had focused on just one sport that I could have had more success at the next level," Evans said. "I have three state championship rings and was chosen all-state six times. It's hard to say that I could have given that up to focus just on college football or just one of those things. I got to be a part of some really special teams."

His senior football season began with a 16-8 win over rival Van Buren, and the regular season ended with another win over a rival with a 17-14 win against Greenwood for the conference championship.

Alma led 17-14 and was driving but lost a fumble with 4:44 left, leaving the door open for Greenwood.

"I can't remember a lot of things, but I remember those two sacks," Witherspoon said. "On the second one, he made a move and came under the tackle and smoked Stegall. I remember that. He was really something."

Evans remembers the sacks as well but credits something other than great motivation or inspired play on that last defensive effort.

"Really, we just finally got on the dry end of the field," Evans said. "When I sent out my recruiting video, the second sack was my opening play."

"We had 10,000 people there; everybody came out to see him," Evans said. "The stadium was vibrating before the game. I was really jacked up for the game. I got him early for a loss, and to me and some of my teammates I think it was like we knew he was human after that. We just got him for a loss of four yards. We had some good success against him. We had a really good defense."

The next week, Alma had to travel to Wynne and lost 14-7, giving up an interception for a touchdown in the third quarter and being stopped after having first-and-goal at Wynne's 3 in the fourth quarter.

Evans, who played at 6-foot-6, 230 pounds his senior season as a defensive end, remains the Airedale's all-time sack leader with 22.5.

Evans was selected to the Arkansas Activities Association's All-State team for the second year in a row.

He quickly made the transition into basketball, and the Airedales won the AAAA-West and went into the state tournament at Greenwood with 24 wins.

In two games against Greenwood during the season, Evans had 29 points, including a fourth-quarter rim-hanging slam in the second meeting that brought the house down at Alma in February, with 15 rebounds.

In the three state tournament games leading up to the championship game, Evans averaged 15 points and five rebounds.

"We're down 17-2, and he catches it and drop-step dunks," Alma basketball coach Stan Flenor said. "He changed the momentum. We were down and struggling. He had a lot of big moments that season."

Evans scored 20 points in the game, including a basket to open overtime, and grabbed six rebounds with three assists. He was named to the State Tournament Team and All-State for the regular season.

"He was a difference-maker and a game-changer," Flenor said. "He was a high flyer, but his intangibles are immeasurable. He was a great teammate, a hard worker and a tremendous athlete for a guy that was 6-6. He could run and jump. He's gone on and became a great, young adult, too. We're awfully proud of him."

He then won the state meet in the high jump at 6-6 and the discus with a heave of 159-11 to lead the Airedales to the Class AAAA track and field championship for the second straight season.

"When have you ever heard of somebody combining to win two state championships, in discus and high jump," McSpadden said. "You just don't see that very often."

He represented Alma one last time in the Arkansas High School Coaches Association All-Star football game at Reynolds Stadium at the University of Arkansas that June. Evans capped his career with a win as the West defeated the East, 28-13.

"That was really cool," Evans said. "I met a lot of cool people, some that I played with at Arkansas Tech and some that I played against at Harding University and Ouachita Baptist. One of the neat things is you get to trade helmet stickers, and I've still got my helmet. I can remember a lot of the guys by the stickers on that helmet."

'There are things that I come across every day that I still think about, like coach Flenor, when I said 'yeah', he would say 'yes, sir and no, sir' just to remind me that 'yeah' isn't an appropriate answer. It's true. Those are things I'm teaching my daughter that 'yeah' is not OK," Evans said. "Those were mentors in my life."

Evans is in private business in Conway and lives in Mayflower with his wife, Jill, and daughter, Elyse. 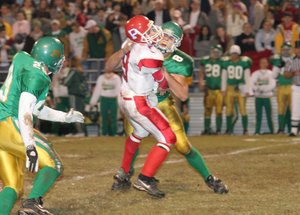 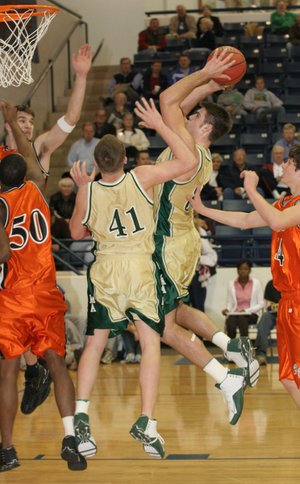 March 2, 2005: Alma's Ryan Evans rebounds the ball and puts it back in for a score over #50 Michael Holder and #34 Mitch Rueter of Batesville.