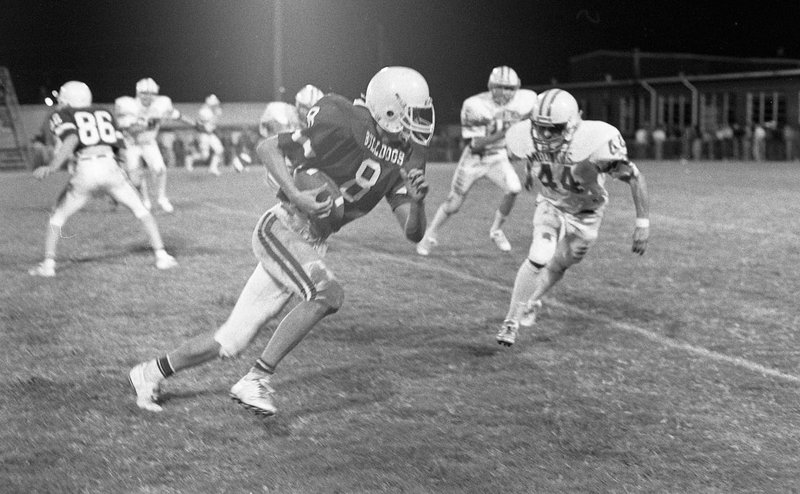 PHOTO COURTESY OF THE SHILOH MUSEUM OF THE OZARKS Chris Smith (8) of Springdale heads for the end zone in a game against Rogers in 1986. Smith was a multi-sport standout at Springdale and is a member of the Springdale Hall of Fame.

SPRINGDALE -- Chris Smith could not wait to be a Springdale Bulldog. As the son of a coach, he spent hours of his youth at the football field, in the gym and anywhere else a ball was thrown, kicked or batted.

He finally got his chance to pull on that red jersey in the mid-1980s, and when he left after graduating in 1988, he left a legacy as long as a football field as a football and track star. He even earned points as a gymnast, but more on that later.

Smith, whose father Charlie Smith was a longtime boys basketball coach at Springdale, did not put up gaudy numbers. That just wasn't done in legendary coach Jarrell Williams' system. A lot of what Smith did could not be measured in statistics. How do you put a number on toughness?

"His senior year we are at Watson Chapel for the first round of playoffs," said former teammate Donald Tucker. "I was a sophomore and in the huddle. Chris hit this guy so hard that he lost his memory. He came back to the huddle and had to ask what he was supposed to do for each of the plays. He wouldn't go out of the game.

"Honestly, he was better with no memory of the plays than anyone else on the field anyway."

Smith has a place in both the Springdale Hall of Fame and the University of Central Arkansas Hall of Fame, where he was recruited by Harold Horton and started at safety for the 1991 national champions. He was named the Most Valuable Player in the championship game.

Versatility was Smith's strong suit. He played quarterback, running back, wingback, receiver and multiple positions on defense. As a sophomore defensive end, Smith made an immediate impact and ended the year with a team-high 78 tackles. He capped his career with 76 tackles as a senior safety as the Bulldogs posted seven shutouts and defeated the No. 1 team in Missouri (Kansas City Rockhurst) and the No. 1 team in Arkansas (Fort Smith Northside).

Perhaps the play he is best known for was a tackle near the home sideline of Bulldog Stadium in 1987 when he blasted Rockhurst running back Kenyon Rasheed, knocking the future NFL back into the fencing around the field.

"That was the hardest tackle I ever saw in my coaching career," said longtime Springdale coach Kerry Winberry, who coached Smith in track as well as football. "Rasheed was a big guy and very talented, and Chris just rocked him. That hit, wow. It was the toughest lick I've ever seen on a football field."

Playing for legendary Red'Dog football coach Jarrell Williams was something Smith still cherishes. Although the team was successful, it was the values and work ethic Williams demanded that made the biggest impact, Smith said.

"Playing for Coach Williams was something I could not wait to do," Smith said. "By the time I got there he had mellowed a little, but he demanded a lot out of us, and we all had a tremendous amount of respect for him. We'd run through a brick wall for him."

The trademark of Springdale teams under Williams was toughness. Smith is one of just a handful of former Bulldogs who reached a high level in college. Williams was a master at getting the most out his players.

"Springdale, the tradition that you learned as a young pup was to be gritty and tough," Smith recalled. "The program was built on just hard-nosed guys that got after it. We always said we may not beat you on the scoreboard, but you are dang sure going to know you were in a fight. That was what coach Williams and all the coaches preached."

Smith even respected his former coach after Williams cut him from the golf team.

"Yeah, he told me just to get off the course," Smith laughed. "I wasn't very good at golf."

Then there was the gymnastics challenge.

"That's kind of a funny story," Smith said. "I was hanging around a girl on the team, and the gymnastics coach, she challenged me. She said 'Chris if you're going to be hanging around here, you're either going to have to compete or get out of here.' So I said, 'Let's do this.' So after a track meet, I got back, and it just so happened for me to compete in the vault, and I finished fourth.

"I won't say how many contestants there were."

For all his success in football and even gymnastics, it was on the track where Smith really flourished. Specifically the 10-event decathlon.

"There was a guy in Springdale who was older than me that I really idolized," Smith recalled. "Greg Kulp did the decathlon, and that really inspired me to do it."

Smith competed in the state decathlon all three years, winning the event as a senior in 1988. He also competed in a national decathlon in Sacramento, Calif., placing fifth.

"He was a natural athlete," Winberry said. "Anything he attempted he could accomplish. He had a knack for picking up technique. When we went to California, I tried to get him to prepare for it, but he didn't want to prepare that much. He just wanted to see what he could do. He high-jumped 6-4 and never worked on it. He excelled in his own way."

Today Smith, 49, is in medical equipment sales. He and his wife Kristie, also from Springdale, have three children and live in Conway.

Smith remains humble and stressed that the team always came before individual accomplishments for him.

"I'm honored to be considered one of the best athletes at Springdale," Smith said. "There are a lot of people who could claim that honor. It means a great deal to me, but I had great teammates who pushed me, and we all fought together. That is what I will always remember." 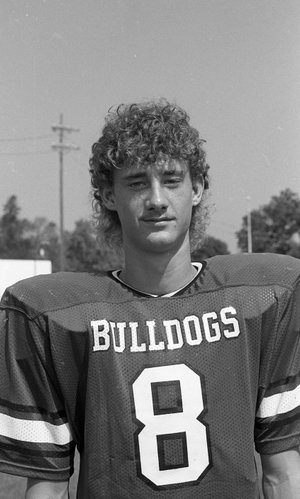 Chris Smith was a standout in football and track at Springdale High School. He was an all-conference selection in football and won the state decathlon as a senior in 1987. He went on to earn All-American honors at UCA, helping the Bears to the NAIA national championship in 1991.

WHY HIM? There was no sport at Springdale that Smith did not excel in. He was a three-time all-conference selection in football. He was named to the all-state team in 1987 along with the Associated Press Super Team and the Arkansas Democrat Super Team. He was selected to the Arkansas High School Coaches Association All-Star team in 1988. … Signed with the University of Central Arkansas and led the team to the 1991 national championship, earning Most Valuable Player honors in the championship. … Was a decathlete in track and field, winning the state decathlon in 1988. Also competed in a national decathlon in California, placing fifth in 1988. … The son of former Springdale boys basketball coach Charlie Smith. … Compiled more than 150 career tackles as a safety/linebacker at Springdale. … Was named All-AIC three times at UCA and was named to the NAIA All-American team. … Is a member of both the Springdale and UCA Halls of Fame.

Print Headline: SMITH EXCELLED IN EVERY ARENA AT SPRINGDALE HIGH