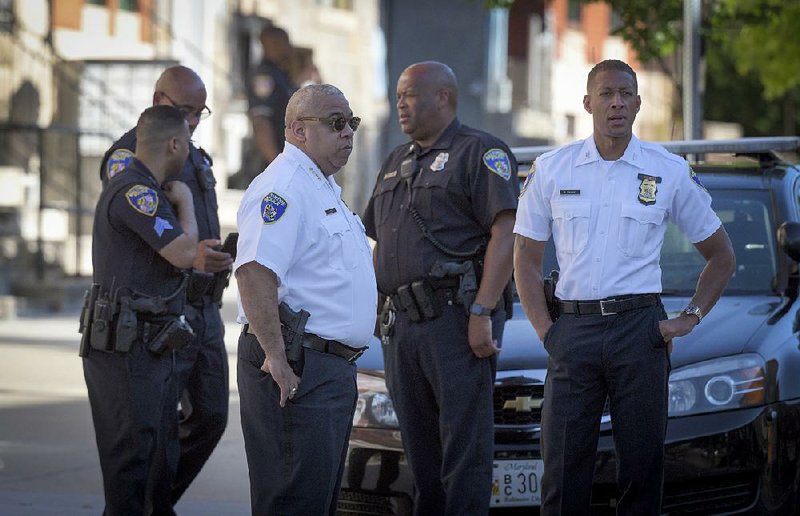 BALTIMORE -- A man demanding methadone opened fire at a Baltimore addiction clinic Monday, killing one person and wounding a police sergeant before he was fatally shot by police, authorities said.

Baltimore Police Commissioner Michael Harrison said at a news conference that the gunman had gone into the clinic seeking the drug that helps control opioid cravings and withdrawal symptoms. It can be given only at government-regulated clinics.

The shooting was reported shortly after 7 a.m. and was captured on video by the body cameras of the officers who responded to the clinic, Harrison said.

"When our officers arrived, they were met by civilians outside who told them there was a man inside with a gun who had recently fired shots inside the building," Harrison said.

The commissioner said responding officers "attempted to de-escalate the situation many times. ... As the suspect fired upon our officer, he returned gunfire but was struck by the suspect's rounds."

The injured sergeant was identified as Billy Shiflett, 48, a 25-year veteran of the force.

It's unclear if a man found fatally shot inside the clinic was a patient.

Accusers plead against bail for Epstein

NEW YORK -- Two of Jeffrey Epstein's accusers urged a judge Monday to keep the wealthy financier behind bars until he goes on trial on federal charges that he sexually abused underage girls.

The women stood just feet from where Epstein, 66, was seated in his blue jail outfit as they asked a federal judge to reject a request by Epstein's lawyers that he remain under house arrest in his $77 million Manhattan mansion until trial on conspiracy and sex trafficking charges.

Judge Richard M. Berman said he'll rule Thursday whether Epstein can be freed on bail, but he noted there is a presumption in sex trafficking cases involving children that the defendant will remain locked up.

Epstein was arrested July 6 as he arrived in New Jersey from Paris on his private plane.

Assistant U.S. Attorney Alex Rossmiller said a raid at Epstein's Manhattan mansion after his arrest turned up "piles of cash," "dozens of diamonds" and an expired passport with Epstein's picture and a fake name in a locked safe.

He called Epstein a flight risk and a danger to the community, saying he should remain incarcerated until he is tried on charges that he recruited and abused dozens of underage girls in New York and Florida in the early 2000s.

ALBANY, N.Y. -- A 17-year-old girl in upstate New York was killed by a man she'd met recently on Instagram, who then posted photos of her corpse online, police said Monday.

The pictures were redistributed widely, including by online posters who made light of or celebrated the teen's death.

On Monday, police identified the slain girl as Bianca Devins of Utica, N.Y. Brandon Clark was being held on a second-degree murder charge. It was unclear whether Clark, who lived in Bridgewater, N.Y., had a lawyer who could comment on his behalf.

Users on the Discord chat site saw the photos Sunday morning and alerted police. Officers were trying to find the teen when the 21-year-old Clark called 911 to report what he'd done, Utica's public safety department said in a statement.

Officers who tracked the call found Clark stabbing himself in the neck, causing injuries that required hospital treatment, authorities said. Devins' body was beneath a tarp nearby, police said.

BATON ROUGE -- The founder of Baton Rouge's African American history museum died of suffocation and her death was a homicide, a coroner ruled Monday, as residents of Louisiana's capital city struggled to come to terms with the slaying of the well-respected, 75-year-old community leader.

East Baton Rouge Coroner Beau Clark released preliminary autopsy results that show Sadie Roberts-Joseph was suffocated before her body was found in the trunk of a car Friday.

He said Roberts-Joseph died from "traumatic asphyxia, including suffocation." The Advocate reports this means her airways were physically blocked, cutting off her oxygen supply.

Roberts-Joseph's museum features a 1953 bus that visitors can board to learn more about the Baton Rouge bus boycott of that year, as well as other exhibits on agriculture and black contributions in areas such as inventions and art.

The Baton Rouge Police Department announced Saturday that Roberts-Joseph's body had been discovered Friday. Sgt. L'Jean Mckneely Jr. said Monday that she'd been discovered in the trunk of her own vehicle. 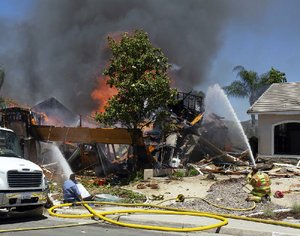 Photo by AP/ANDREW FOULK
A firefighter and area residents work to extinguish the flames Monday after a natural gas explosion that destroyed a home in Murrieta, Calif. The blast killed a Southern California Gas Co. worker and injured more than a dozen people, authorities said.