NWA Democrat-Gazette FILE PHOTO/BEN GOFF Dominick Griggs, a junior at Bentonville West High School, helps paint a mural Wednesday, May 15, 2019, on the basketball courts at Memorial Park in Bentonville. The mural with a 1970's theme was designed by Bentonville High senior Jonathon Coppick and is included in the city's art map.

"We felt like the trails were probably the most convenient for us, because those were city property that had the space for some of these," Kerr said of placing the initial art displays. "The ones that were in the tunnels, those were basically empty pallets to do something with."

The city often found it challenging to tell people where the displays were located, which Kerr said was a significant motivator for creating the map. She said the city benefits from it as well, though.

"Our biggest challenge that we were having is that we didn't have them kind of compiled all together," she said of the art locations. "This kind of allows us to do that on the map, but also people can visually see the locations."

While some of the art locations may appear to be out of the way, David Wright, Parks and Recreation director, said a lot of thought went into the decision on where to place the art to contribute to the city's sense of place.

Some of the art has been paid for by the city, although Visit Bentonville helped to pay for aspects of the displays, Kerr said. The map will continue to evolve as more art goes on display in the months ahead, she said, and there may be opportunities to feature art on private property in future maps.

"Some of it was in association with other programs or projects, but they had to come through our committee for the installation," she said of the Public Art Advisory Committee. "The artwork on the tunnels, that was kind of a joint partnership with the city and Visit Bentonville."

Creating the city's sense of space was a significant aspect of choosing where to display public art, Wright said.

"When we talk about sense of place, what art does is it really enhances the experience of the participant when they're in our parks or on our trails," he said. "It opens up trails to a different type of use and brings people to a destination that they may not normally go to."

He said a simple hike could become an act of discovery for some.

"It almost creates this little scavenger hunt," Wright said, making note of the PAC-Man sculpture by Craig Gray along the North Bentonville Trail.

Wright says the rock sculpture reminds him of someone who's exploring the property and exiting the woods to take in the area into which he's emerging. 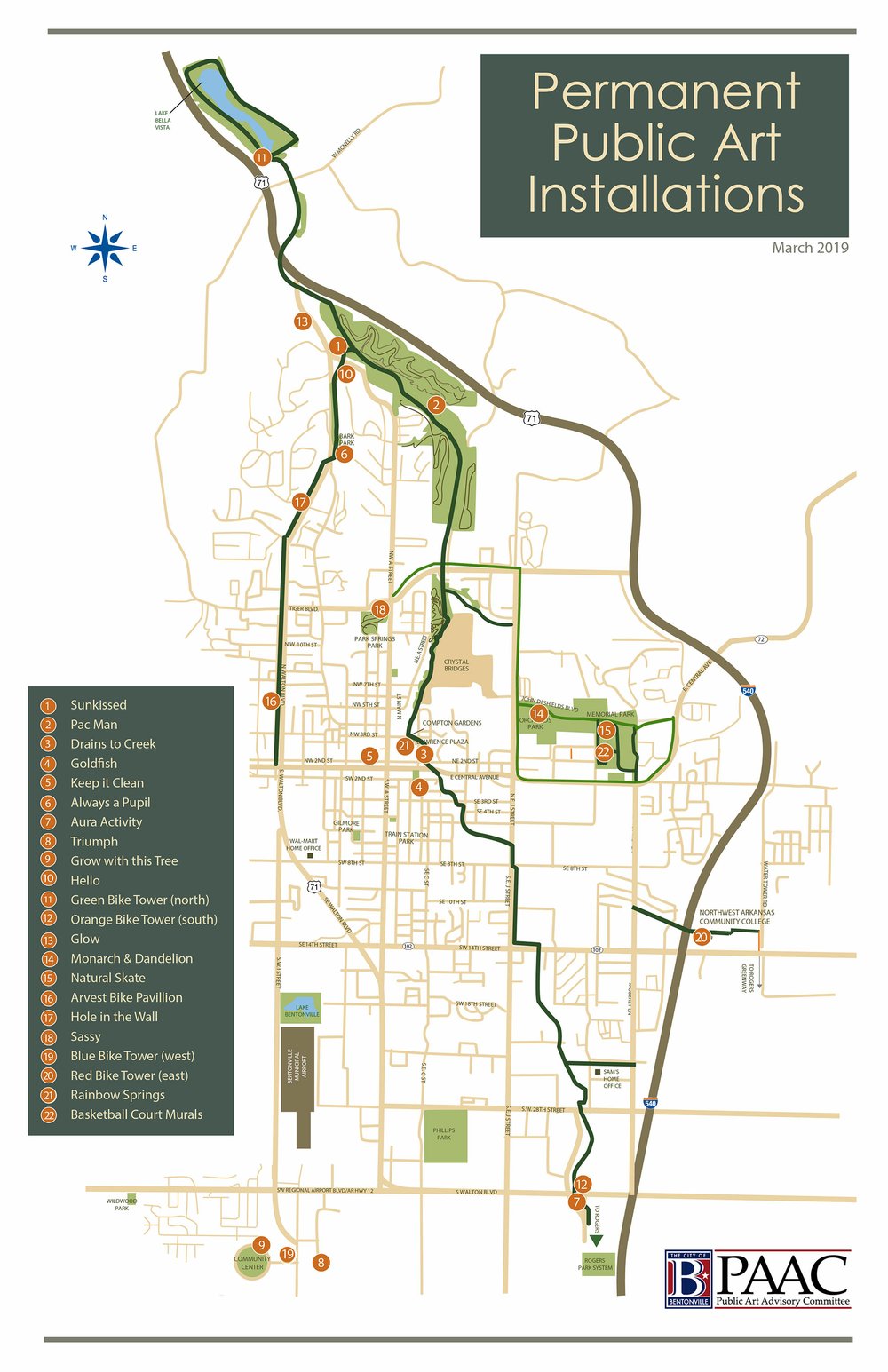 "That's my personal interpretation, somebody may have something different," he said.

Not all art is off the beaten path. Rainbow Springs is the city's latest display and is downtown in Lawrence Plaza, 214 N.E. A St.

The interactive display was installed in May and features acrylic tubes with lighted strips inside. The project was a collaboration between the Scott Family Amazeum and Amazeum maker resident Eugene Sargent, said Erik Smith, Rainbow Springs project manager.

The maker residency program has been offered at the Amazeum for about a year, Smith said, and allows artists and makers to collaborate with the Amazeum's creative team.

"The original idea was to see if the lights could be made to behave like a bouncing ball," Smith said. "The initial results were so enjoyable to watch and play with, that the creative team at the Amazeum imagined an array of identical light sticks behaving in concert, responding to the triggering motions, creating an ephemeral work of dancing lights."

The final form and arrangement of the light sticks was highly site-specific to ensure the ideal level of interactivity and a nighttime presence, he said.

Discovering a piece of art when exploring area trails or downtown adds to the experience and creates destinations for people to explore further, Wright said.

Smith said he hopes people take the time to discover the art sometimes right in their proverbial backyards.

"There is a growing collection of interesting art showing up all around the area," he said. "I would encourage people to wander around town and keep an eye out for interesting works of art, including Rainbow Springs. And if they do come upon Rainbow Springs, I hope they would take a moment to watch, wonder and play with it."

Bentonville will be offering two opportunities for artists to submit art proposals in the months ahead. The pieces will be at the center of the roundabout on Bright Road and at the corner of Southwest Tiger Boulevard and Northwest A Street. The latter location will feature art transitioned in and out of the display space. Artists who’re interested on receiving information on opportunities to submit project proposals should contact the Comprehensive Planning Office at (479) 271-3122 to be placed on the mailing list.