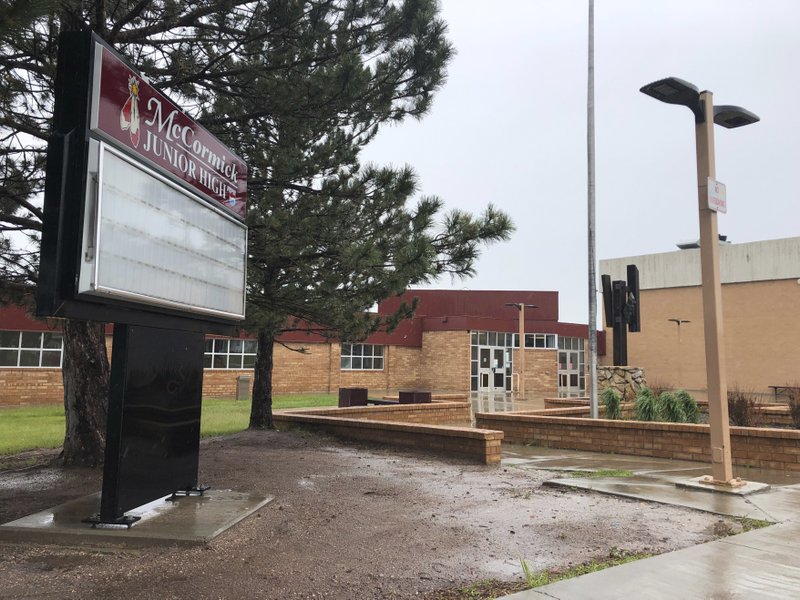 ** HOLD FOR STORY ** This June 20, 2019 photo shows McCormick Junior High School, in Cheyenne, Wy. School officials in Cheyenne are addressing the aftermath of racist and anti-gay flyers distributed by junior-high students. The leaflets at McCormick Junior High School in March told pre-teens to &quot;Join the KKK&quot; and that &quot;It's not OK to be gay.&quot; A district response plan calls for hiring a counselor and providing more training to help employees report and investigate harassment. (AP Photo/Mead Gruver)

CHEYENNE, Wyo. -- The leaflets distributed by students at a junior high school told youths to "Join the KKK" and that "It's not OK to be gay."

In the capital of the state known for the 1998 murder of gay college student Matthew Shepard, school officials have worked to respond to the spring incident. They're holding community meetings and plan to hire a "diversity and cultural awareness" counselor while providing additional employee training.

"We've got a pretty good plan to try to work on all of that," said Boyd Brown, superintendent of Laramie County School District No. 1.

Others aren't so confident that the school district in Cheyenne is up to the challenge. The new approach to student bullying and harassment sounds good, but "only time will tell if it's upheld," said parent Abby Kercher.

A group of McCormick Junior High School students handed out the fliers and taped them up in hallways March 26, other students and teachers said. Brown has declined to say how many students were involved or whether any were punished, though Kercher said one eighth-grader was suspended.

The district replaced the school's principal weeks after the incident.

Parents and students report a long history of anti-gay and racist harassment at McCormick that continued through the rest of the school year. Some students kept violating a ban on Confederate flags by displaying the images on their computers, said Kercher's daughter, 14-year-old Ashlynn Kercher.

"They just took it down a notch," Ashlynn said.

Many details about the bullying and the school's response remain unknown. School officials refuse to release a full report on the investigation, saying that doing so would violate the Family and Educational Rights Privacy Act. The Associated Press has joined the Wyoming Tribune Eagle newspaper and other news media in a lawsuit seeking the report's release under Wyoming's public records laws.

The fliers didn't surprise parent Fred Gallop. He said other McCormick students bullied his 13-year-old daughter with a racial epithet twice during the recent school year.

"It was more like, 'We're starting to see a trend here,'" Gallop said.

Ashlynn Kercher said other students bullied her for having a girlfriend.

"If we held hands, a bunch of kids would start making fun of us, pointing and laughing" and using anti-gay slurs, Kercher said.

Advocates for the gay and transgender communities learned about the fliers from substitute teacher and Gay-Straight Alliance co-sponsor Kaycee Cook. According to Cook, McCormick Principal Jeff Conine's first reaction was to tell her she was no longer welcome to teach at McCormick.

Conine left his job soon after, though district officials have declined to say why. Brown said confidentiality laws prevent him from answering any questions about Cook or Conine.

Conine doesn't have a listed phone number and couldn't be reached for comment.

Meanwhile, school officials traumatized some student Gay-Straight Alliance members by calling them out of class for questioning in front of police officers about the fliers, Kercher said.

"They felt really intimidated. Kids were crying," Abby Kercher said. "These were the victims. You don't need to have police officers in there. It was just handled wrong."

Brown acknowledged officers "probably shouldn't have" been present at those meetings.

"At the time, we had two opposing sides that were kind of escalating the situation," Brown said.