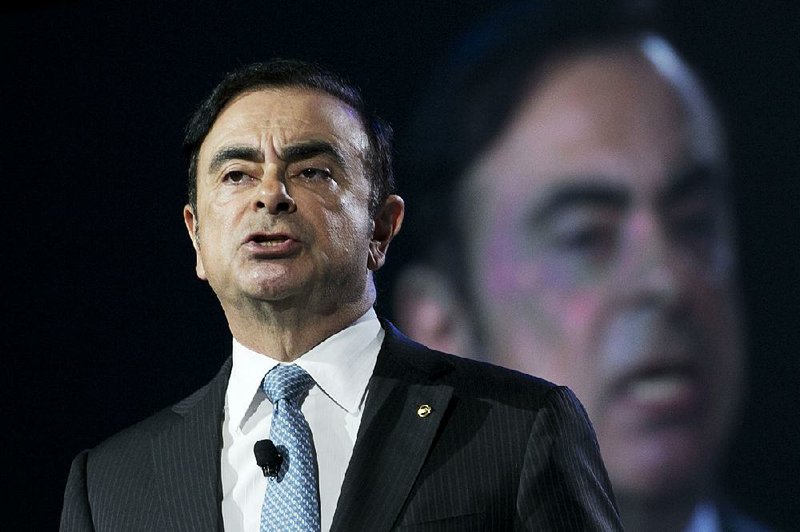 In this March 23, 2016, file photo, Carlos Ghosn, the former Chairman and CEO of both Nissan and Renault, speaks at the New York International Auto Show in New York.

PARIS -- Renault announced new leadership Thursday after Carlos Ghosn resigned as chairman and chief executive officer from his jail cell, ending his reign as one of the world's most powerful industrialists and opening a pivotal new chapter for the world's biggest auto alliance.

Jean-Dominique Senard, the chief executive of the French tire-maker Michelin and a veteran businessman, was named chairman, the company said. Thierry Bollore, Renault's chief operating officer, was named chief executive. Ghosn had filled both positions for more than a decade.

The quick transition -- within hours of Ghosn's departure -- removes an obstacle to stronger ties between Renault and Nissan. Their relationship has festered since Ghosn was arrested in Tokyo in November on charges of financial wrongdoing.

Company officials said Renault would step up efforts to smooth tensions and reinforce the global car alliance, which also includes Mitsubishi Motors of Japan. Renault and Nissan have viewed each other as trying to capitalize on the leadership vacuum since Ghosn's arrest to tip the balance of power.

That diplomatic task will largely fall to Senard, 66, the son of an ambassador and a meticulous executive with a reputation for easing industrial relations with unions while at Michelin.

In the statement, the Renault board said it planned to "supervise actively the functioning of the alliance" and designated Senard as its main negotiator with its partners "for any discussion on the alliance's organization and evolution."

The combined companies employ about 450,000 people worldwide. Renault has more that 47,000 workers in France, making it one of the country's biggest employers.

At a late-night news conference at Nissan's global headquarters in Yokohama, Japan, Nissan's chief executive, Hiroto Saikawa, said he hoped to hold talks with the new Renault leadership as early as possible. "I think we will be able to hold big, forward-looking discussions."

In a statement issued earlier, he said Nissan welcomed Renault's management changes and that both companies had long respected each other's identity and autonomy.

"These mutually beneficial activities will not change in any way; in fact, we believe they need to accelerate," Saikawa said in the statement. "We are very pleased to be able to open a new chapter in our historic partnership."

Saikawa, a one-time Ghosn protege, emerged as his boss's chief accuser after allegations arose that Nissan's then-chairman had abused his power and committed financial misdeeds. The allegations strained relations between the companies, but Saikawa was vindicated when Renault named the two new leaders after standing by Ghosn as leader for two months.

Ghosn resigned Wednesday night as chairman and CEO of Renault. Nissan Mitsubishi had ousted him as chairman shortly after his Nov. 19 arrest. Ghosn, who has denied wrongdoing, remains in jail in Japan after several failed attempts at bail.

Renault, which holds a 43 percent stake in Nissan and depends on the Japanese carmaker for financial contributions, is especially eager to have a say over who Nissan's next chairman will be.

Although no longer in his leadership positions, Ghosn remains on the boards of Mitsubishi, Nissan and Renault and can be removed only by shareholder votes that are scheduled to be held in the coming months.

Renault urged Nissan last month to hold a special shareholders meeting to discuss the French automaker's representation in the Japanese firm. But Saikawa rejected the call, emphasizing the need to strengthen the company's governance first.

On Thursday, Nissan said in a statement that it was preparing to hold such a meeting in mid-April. "The agenda is to be limited to the discharge of directors Carlos Ghosn and Greg Kelly, and the appointment of a new director to be nominated by Renault," the statement said. Kelly, a top aide to Ghosn at Nissan, was indicted on allegations of having helped his boss conceal income.

Saikawa denied at the news briefing that Nissan was dragging its feet or seeking to exclude Renault from decision-making by not holding its shareholders' meeting sooner. Such an event requires many preparatory steps, he said, and April was the earliest possible time that Nissan could hold such a meeting.

"We are absolutely not seeking to delay," he said.

The French government, the biggest shareholder in Renault, also sought to play down tensions between the automakers Thursday. The finance minister, Bruno LeMaire, said in an interview on BFM television from Davos, Switzerland, that it was important that Nissan move forward at the April meeting. Strengthening the alliance was a top priority, he added, along with maintaining stability and jobs.

The French government has signaled that it wants closer financial ties with Nissan, the alliance's dominant performer.

Nissan, which holds a 15 percent nonvoting stake in Renault, has made clear that it is opposed to Renault taking greater power in the alliance. Saikawa has said several times in recent months that he would like to rebalance the shareholdings, although he has recently refrained from pressing the point publicly.

LeMaire said in the Thursday interview that the question was not on the table "for the moment."

Information for this article was contributed by Ma Jie of Bloomberg News.